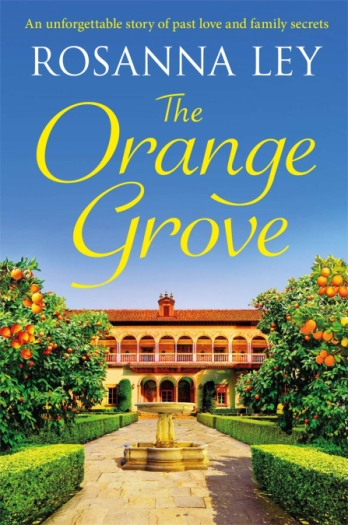 I’ve long been a fan of Rosanna Ley’s writing so it gives me enormous pleasure to participate in this blog blitz for her latest book, The Orange Grove. My enormous thanks to Team Bookends for initially sending me a copy in return for an honest review and to Milly Reid for offering me a copy for today’s post.

It’s a year tomorrow since I reviewed Rosanna’s From Venice With Love here on Linda’s Book Bag.

I wrote about having afternoon tea with Rosanna Ley at the Covent Garden Hotel  when Her Mother’s Secret was released in this blog post.

My review of Her Mother’s Secret is here.

Rosanna Ley’s Last Dance in Havana was one of my books of the year in 2016 and you can find out all about that here and read my review here.

It was also my huge pleasure to host Rosanna on Linda’s Book Bag when The Little Theatre By The Sea was released and she wrote a glorious guest piece about her travel and research in this post.

The Orange Grove is released in paperback today, 24th June 2021 by Quercus and is available for purchase through these links.

An unforgettable story of past love and family secrets, set in sunny Seville

Holly loves making marmalade. Now she has a chance to leave her stressful city job and pursue her dream – of returning to the Dorset landscape of her childhood to open Bitter Orange, a shop celebrating the fruit that first inspired her.

Holly’s mother Ella has always loved Seville. So why is she reluctant to go back there with Holly to source products for the shop? What is she frightened of – and does it have anything to do with the old Spanish recipe for Seville orange and almond cake that Ella keeps hidden from her family?

In Seville, where she was once forced to make the hardest decision of her life, Ella must finally face up to the past, while Holly meets someone who poses a threat to all her plans. Seville is a city full of sunshine and oranges. But it can also be bittersweet. Will love survive the secrets of the orange grove?

My Review of The Orange Grove

Holly has a new plan.

The Orange Grove is the most perfect summer book. Rosanna Ley has woven a mesmerising tale of romance, history and travel that affords the reader the chance to escape into the passionate world of flamenco, Seville, food and love. I adored it as it is exactly the tonic we need in our lives right now. I didn’t just want to read about Holly and Ella’s activities, I wanted to BE Holly and Ella, so persuasive is Rosanna Ley’s writing.

The dual time lines of Holly and Ella’s experiences in Seville are perfectly balanced in The Orange Grove so that I was equally interested in, and captivated by, both aspects. I loved the way the two women’s stories were brought together as the narrative progressed with echoes of the past very firmly in the present. This was such skilful plotting.

What I found fascinating about the characters, was that Ella is actually quite flawed but I still cared about her just as much as I did Holly. However, it was the more secondary Felix who surprised me. Compared with the passionate Spanish men Felix is hardly present for much of the story, could, at times, be deemed to be weak and almost contemptible and is often frustrating, but he drives much of the action and I was absolutely invested in his part on The Orange Grove too. I wanted positive outcomes for him but you’ll need to read the book to see if I got them!

I think what I enjoy so much about Rosanna Ley’s writing is that she presents the reader with warm, vivid characters that she places in setting that are brilliantly described with full use of all the senses so that the reader is utterly transported. I was most definitely in Seville with Holly and Ella, smelling the orange blossom, hearing the flamenco beats and music, tasting tapas, seeing the vivid orange of the fruit and almost feeling the romantic kisses and caresses so that I experienced a full sensory delight in The Orange Grove. Much is often said about transporting writing, but The Orange Grove is just perfect in putting the reader at the heart of the story.

Aside from the wonderful characters, the evocative setting and the smooth and captivating writing style with naturalistic dialogue and carefully crafted sentence, The Orange Grove offers so much more than a romantic, escapist read. There are undercurrents of organised crime, a murkier world than tourists might believe in this vibrant Spanish city and an exploration of love, need, commitment, control and loyalty that give fabulous depth to the story too.

The Orange Grove is a magnificent story. It is Rosanna Ley writing at her most skilled and therefore becomes a simply outstanding narrative that made me smile, made me shed a tear or two and brought me complete summer joy. I loved it unreservedly.

Rosanna Ley works as a creative tutor and has written many articles and stories for national magazines. Her writing holidays and retreats take place in stunning locations in Spain and Italy. When she is not travelling, Rosanna lives in West Dorset by the sea.

8 thoughts on “The Orange Grove by Rosanna Ley”