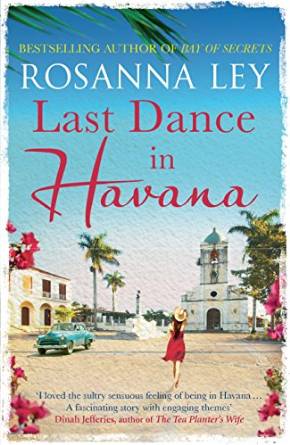 I was delighted to be accepted by Quercus Books to take part in their summer reading programme #QuercusSummer and to receive the first book Last Dance in Havana by Rosanna Ley, published in e-book and paperback on 16th May 2016. Last Dance in Havana is available for purchase on Amazon, from Quercus, Waterstones, WH Smith and all good bookshops.

Cuba, 1958. Elisa is only sixteen years old when she meets Duardo and she knows he’s the love of her life from the moment they first dance the rumba together in downtown Havana. But Duardo is a rebel, determined to fight in Castro’s army, and Elisa is forced to leave behind her homeland and rebuild her life in distant England. But how can she stop longing for the warmth of Havana, when the music of the rumba still calls to her?

England, 2012. Grace has a troubled relationship with her father, whom she blames for her beloved mother’s untimely death. And this year more than ever she could do with a shoulder to cry on – Grace’s career is in flux, she isn’t sure she wants the baby her husband is so desperate to have and, worst of all, she’s begun to develop feelings for their best friend Theo. Theo is a Cuban born magician but even he can’t make Grace’s problems disappear. Is the passion Grace feels for Theo enough to risk her family’s happiness?

My Review of Last Dance in Havana

When Elisa dances the rumba with Duardo one steamy night in 1958 in Havana, the passions of the moment will reverberate for decades.

Immediately from the sensual and sensuous opening to Last Dance in Havana I knew I was going to love this book. I was completely transported into the world of Elisa and Grace so that I found it hard to tear myself away from reading when real life made its demands.

Frequently I felt as if my heart was breaking and my head was screaming silently, ‘No. Don’t do that. Don’t say that!’ so that I was absolutely caught up in the narrative. There is such visceral emotion I could hardly bear to read on but I couldn’t stop reading either. I could feel my throat tightening with the attempt not to cry so often because I found the level of passion and the depth of love portrayed overwhelming at times.

The quality of the writing is so effective. In some ways the plot is relatively simple, but Rosanna Ley’s varied and beautiful prose encompasses a range of sentence lengths that capture the moment, the emotion , the meaning, perfectly. She draws on all the senses in a way that adds layers of glorious experience for the reader. Seldom have I encountered a writer who can convey those senses so completely.

The settings depicted are completely authentic. I have never been to Bristol but I feel I could find my way around quite easily. The descriptions of Cuba have made me desperate to visit and experience the rumba for myself, to travel in an open-top American car and taste the chicken, rice and beans. Importantly too, I feel I have learned a considerable amount about Cuba’s political history through the deftly written and brilliantly researched back-drop to the story. Identity, honesty, passion, love and truth are all intricately woven into that history and into the narrative. This is masterful story-telling.

Rosanna Ley’s characters are so human. They are flawed, believable, and appealing – even Rosalyn, whom I can hardly forgive for her actions.

I have absolutely no idea why I haven’t read Rosanna Ley before. She is exactly my kind of author and I’ll be getting my hands on everything she’s ever written. I really do think you need to put your life on hold and read Last Dance in Havana. I feel my life has been enriched by the experience of doing so. I absolutely loved it.

17 thoughts on “Last Dance in Havana by Rosanna Ley”