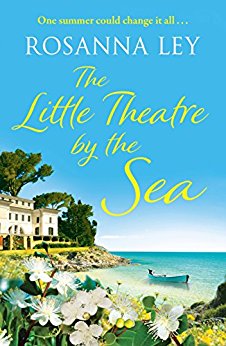 Last year, Rosanna Ley’s Last Dance in Havana was one of my books of the year and you can read my review here. Consequently, I’m delighted to be hosting a guest piece from Rosanna about travel and research to celebrate her latest release, The Little Theatre by the Sea.

The Little Theatre by the Sea was published by Quercus on 9th March 2017 and is available for purchase here.

The Little Theatre by the Sea

Faye has just completed her degree in interior design when she finds herself jobless and boyfriend-less. While debating what to do next she receives a surprise phone call from her old college friend Charlotte who now lives in Sardinia and is married to Italian hotelier, Fabio.

When Charlotte suggests that Faye relocate for a month to house-sit, Faye wonders if a summer break in sunny Sardinia might be the perfect way to recharge her batteries and think about her future. But then Charlotte tells Faye that there’s something more behind the sudden invitation: her friends Marisa and Alessandro are looking for a designer to renovate a crumbling old theatre they own in the scenic village of Deriu. The idea certainly sounds appealing to Faye, but little does she know what she’s letting herself in for if she accepts this once-in-a-lifetime opportunity . . .

For me, the answer varies from book to book. For example, in Return to Mandalay the story I wanted to tell was very specific, inspired by my husband’s family’s experiences in Burma, so that was always going to be the location for the novel. In The Saffron Trail the first seed of the book was saffron so I built the story around a place where saffron is grown and where the other elements of my story (e.g. a hippy trail) could also take place – Morocco was the obvious choice. In Little Theatre by the Sea I just really wanted to write about Sardinia.

Italy is my favourite place to be and to write about and having spent a week in Sardinia a few years ago, I’d acquired a taste for this more rural and unspoilt island. So, my husband/ travelling partner/ photographer (that’s one person) Grey and I decided to travel around the island in our motorhome. This, we reckoned, would enable us to camp by isolated little coves and other delectable places and we would be free to simply go wherever we needed to be in the name of research. But we only had three weeks and there were so many places!

I do a lot of research before I choose a setting. A place has to have an interesting history and culture (although arguably almost everywhere does!) and of course, it has to appeal to me. I have to be inspired by it, be passionate about it and want to write about it. It needs to be the right kind of place for the story I want to write, and it needs to be the kind of place my readers might like too.

With Sardinia, I researched different parts of the island to find a town for my main location, and happily came upon Bosa. This was perfect. It was pretty, it was near a beach, it had a fascinating history… It sounded and looked like my kind of place. And  – since by that point I’d decided that I wanted to write about a theatre – Bosa didn’t have one. (This sounds contradictory, but it would have been tricky. I couldn’t write about any existing theatre – it had to be my fictional theatre.)

Ideally, I like to use a real place for inspiration and then take a few liberties with it so that it fits my story and becomes my own. A bit cheeky, but… I then usually re-name it so as not to upset anyone and so Bosa became Deriu (Casa Deriu was a wonderful museum we came across in the town). Similarly, in The Villa my location inspiration was the village of Scopello (to which I gave its original name of Cetaria.) This technique doesn’t work so well with bigger cities, so in my novels, Mandalay, Barcelona and Havana have retained their true identities…

Research I do for location often begins on the Internet – trawling for information, ideas and historical events to follow up. Then I’ll be reading books (fictional and non-fictional) set there so I can immerse myself in the place more fully, possibly watching films and documentaries set there and finally spending some time there. That’s the best bit! Nothing replaces first-hand for capturing the flavour.

Once I am in situ I will explore, follow up ideas and destinations I’ve researched, attempt to talk to the locals (depending on language barriers!) and glean more information from bookshops, tourist offices, museums or whatever… I will find the ‘places’ where my characters live, work and spend time, and I’ll track their journeys around the town so I know what they will see, hear and experience. As I’m doing this I’ll make notes and my ‘photographer’ will take pictures. It’s quite full on and while I’m doing it I’m sure people watch and wonder what on earth I’m up to. But being so thorough (let’s be positive, I’m not going to call it obsessive) means that when I write up the scene, I can almost re-live the experience – as close as possible anyway. Google Earth doesn’t quite do it for me.

My essential survival kit for going on a research trip would be notebook, pen, map and camera. Oh, yes and walking boots. What else could you possibly need…?

4 thoughts on “Travel and Research, A Guest Post by Rosanna Ley, Author of The Little Theatre by the Sea”