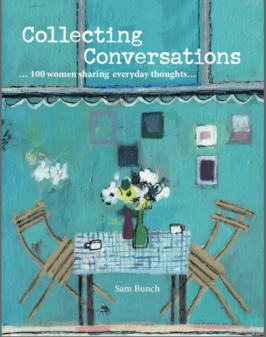 My grateful thanks to Sam Bunch for a copy of Collecting Conversations in return for an honest review. 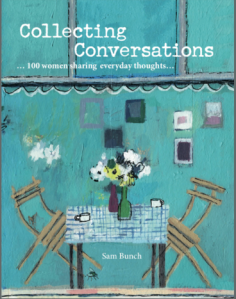 Starting to become unhinged after her parents died, Sam found 30 years worth of diaries her mum had written. In their everyday and often trite delivery Sam was inspired to find out how other women ‘do life’. What she heard was too good not to share. She squeezed out of her comfort zone and decided to write a book about her experience, the interviews and the process in an attempt to show that we can do many things in life if we take away the self imposed limitations. The result is a very beautiful book that is full of honesty, reality and integrity. The book took 7 years to make and it’s arrival is timely. There has never been so much interest in women’s issues. With the #metoo and 100 years of suffrage hitting the headlines along with mental health being a major issue her project is very current.

Collecting Conversations is about change, challenges, conversations and connections – it’s a book that talks about everyday stuff as well as the bigger questions. Sam asked 18 questions to 100 women, she travelled the length of the country asking women from all backgrounds and ages (30 – 95) to come to the kitchen table and chat. Some were life long friends others – fleeting guests. After Sam interviewed each woman she asked what they had taken from their experience? Their answers reinforced what Sam was trying to do – to encourage people to share but also to listen – to themselves! “It’s been a privilege to be asked to reflect on my life”. Having heard how important it is to listen and share our stories she has made the book interactive by asking the reader the questions too.

My Review of Collecting Conversations

With her mother dying, Sam has to reach her quickly, but out of adversity and sadness comes Collecting Conversations.

Collecting Conversations is a delightful book, although I have to admit I found the first section quite emotional as Sam writes about being with her mother when she died and it brought back memories for me of being at Dad’s bedside at the end of his life. However, Sam Bunch writes the first section of the book, which is an account of how the second section came into being, with such warmth, honesty, humour and humanity that I forgive her the few tears I spilled en route! She has the ability to explain her life in a way that made me understand perfectly and wish I had the same quality of expression to articulate my own thoughts and feelings. Although I haven’t yet responded to her 18 questions by writing in the book itself, because I didn’t want to spoil what is a beautifully presented volume with some lovely illustrations, I have thought long and hard about my answers. The writing of Collecting Conversations might have been quite cathartic for the author, but it is equally uplifting and soothing for the reader too.

I so enjoyed the second section of the book too. It rewards several revisits. Initially I read Sam Bunch’s explanations of, and the responses to, the 18 questions in the order that they are presented. Then I went back and reread those relating to women in their 50s like me. Next I read continuously all the extracts from Sam’s Mum’s diary that run along the bottom of the pages so that it was like encountering a moving poem of someone’s life. I know I’ll return to these pages many times more too.

Interviewing just over 100 women about life has given Sam Bunch an extraordinarily rich source of material for a wonderful book. I loved Collecting Conversations, not least because it made me realise what a fulfilled and lucky life I have in spite of its problems. I felt connected to many of the women interviewed even though I haven’t met them so that I feel I have been enhanced by the experience of reading Collecting Conversations. I know others have the same hopes and fears as I do and I have learnt I need to give more time to listening actively to those around me.  Also, next time I get out the fly-spray to kill a fly I’ll think twice – but you’ll have to read the book to find out why!

I heartily recommend Collecting Conversations. It’s a book that celebrates and reveals women. It’s a book that enables the reader to feel a connection, a belonging and to find guidance and peace. Don’t miss it. 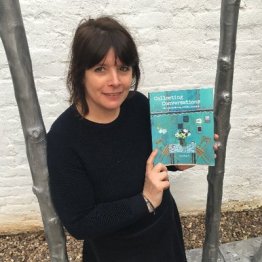 Sam Bunch grew up under the watchful eye of Pendle Hill in Lancashire. She moved to London in 1987 and has been there ever since. She lives with her husband and 3 children – two of which are at University. She is as a Complimentary therapist and more recently author of her first book Collecting Conversations.