My grateful thanks to Melanie Price for inviting me to participate in the celebrations for The Accusation by Zosia Wand. I’m thrilled that Zosia has agreed to stay in with me and tell me all about her latest book.

Published by Head of Zeus on 1st June 2018, The Accusation is available for purchase from Amazon,  Kobo, iBooks and Google Play.

Who would you choose if you had to – your daughter or your husband?

Eve lives in the beautiful Cumbrian town of Tarnside with her husband Neil. After years of trying, and failing, to become parents, they are in the final stages of adopting four-year-old Milly. Though she already feels like their daughter, they just have to get through the ‘settling in’ period: three months of living as a family before they can make it official.

But then Eve’s mother, Joan, comes to stay. Joan has never liked her son-in-law. He isn’t right for Eve; too controlling, too opinionated. She knows Eve has always wanted a family, but is Neil the best man to build one with?

Staying in with Zosia Wand

Welcome to Linda’s Book Bag, Zosia. Thank you for agreeing to stay in with me.

Hello.  Lovely to meet you all!

I’ve brought along my new novel, The Accusation.

It’s the story of Eve and Neil, who are in the process of adopting four year old Milly.. Milly has been living with them for a couple of months and they feel like a family, but until they get through the final review in a month’s time, she is still under the legal guardianship of social services.  Eve has been estranged from her own mother, the possessive and demanding Joan, for two years, but hopes that a grandchild could move things forward. Joan, however, has other plans.

(Sounds as if that’s a recipe for disaster to me and now, of course, I need to read The Accusation to find out what happens!)

What can we expect from an evening in with The Accusation?

I know something about fear. I know it can be red and urgent, the roar of a dragon, flames in your face. We all recognise that. You will know it as something brief and fierce, leaving smoke and ashes, sometimes scalded flesh. This fear is different. My fear is not hot and fiery, but grey and quiet, lingering in the shadows. It’s a chill breath on my neck, a whispered warning in my ear. I have no idea why it follows me. I have never experienced real danger, never suffered an act of extreme violence, but I live with a sense of something lurking.  If I do the right thing, if I follow the rules and keep everyone happy, all will be well, but if I get it wrong, something terrible will pounce. I’ve learned to be one step ahead, becoming stealthy, slipping out of sight, dodging the icy drips and sidestepping the puddles. Always alert.

I sense it before the phone rings. Feel its cold grip on my hand as I try to accept the call. Neil’s name on the screen. My fingers won’t move. I have no reason to think this is anything other than the call I was expecting, to tell me that lunch is ready, that he and Milly are waiting for me. But I know before I tap the screen, before I hear the breathless panic in his voice, I know.

A bitter cold pressing into my back, seeping through my flesh and between the bones beneath. Please, not this.

(Woo. Now that is a very frustrating place for you to stop. I’m desperate to know more.)

What else have you brought and why?

The book is set in the fictional town of Tarnside in South Cumbria.  It’s based on the market town of Ulverston, where I live.  Like Ulverston, Tarnside is a festival town and Eve’s job is to manage the various festivals that take place.  She works in the community park, which is based on Ford Park, Ulverston.  The Lantern Festival features prominently in the novel.  Here’s a photo of a lantern finale in Ford Park.

Eve is originally from Hitchin in Hertfordshire and her mother still lives in Eve’s childhood home, so some of the novel is set there.  My favourite scene, where Eve meets up with her childhood friend, Naz, takes place at Hitchin’s magnificent outdoor pool.  It was still closed when I visited in April to stay with a friend and complete the final edit.  Here’s a photo of the pool being prepared for the summer season. 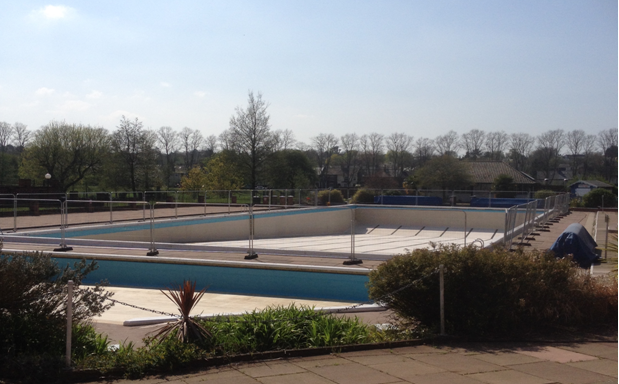 (This takes me back Zosia. I spent many a happy hour at the outdoor pool in my local town…)

And here’s my editing station in the garden of my lovely friend and host, Wendy Bowker.

I was very lucky with the weather!  Who wouldn’t be happy to read through a final draft of a novel in this setting!  It certainly made up for the days hunched over the computer while the rain pounded on the roof!

I have no food to contribute to the evening, though it does feature heavily in the novel.  Joan is a terrible cook, stuffing poor Eve full of stodgy Shepherd’s pies and over rich lasagne.  Her mother-in-law, Betty, who lives in Stevenage, is a far warmer hostess who creates delicious vegetarian dishes and entertains her extended family in a sunny yellow kitchen that leads out to the garden.  I lived in Hitchin myself, many years ago, when I was working as Community Arts Officer for Stevenage. I created the character of Betty in this novel in memory of Betty Pickersgill, who was on the board of the Stevenage Community Arts Trust when I worked there, and a great friend and mentor.  I wish she was still here.  She would have been delighted to discover the character she inspired.

(I’m sure she would. What a wonderful tribute to her.)

Zosia Wand is an author and playwright. She was born in London and lives in Cumbria with her family. She is passionate about good coffee, cake and her adopted landscape on the edge of the Lake District. Her first novel, Trust Me, was published by Head of Zeus in 2017.

3 thoughts on “Discussing The Accusation with Zosia Wand”