I’m thrilled to be able to share an extract from The Bookworm by Mitch Silver today as I think it looks like a thriller I’m definitely going to enjoy.

The Bookworm will be published by Pegasus on 6th February 2018 and is available for pre-order here. 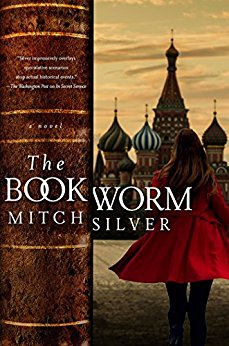 Europe, 1940: It’s late summer and Belgium has been overrun by the German army. Posing as a friar, a British operative talks his way into the monastery at Villers-devant-Orval just before Nazi art thieves plan to sweep through the area and whisk everything of value back to Berlin. But the ersatz man of the cloth is no thief. Instead, that night he adds an old leather Bible to the monastery’s library and then escapes.

London, 2017: A construction worker operating a backhoe makes a grisly discovery―a skeletal arm-bone with a rusty handcuff attached to the wrist. Was this the site, as a BBC newsreader speculates, of “a long-forgotten prison, uncharted on any map?” One viewer knows better: it’s all that remains of a courier who died in a V-2 rocket attack. The woman who will put these two disparate events together―and understand the looming tragedy she must hurry to prevent―is Russian historian and former Soviet chess champion Larissa Mendelova Klimt, “Lara the Bookworm,” to her friends. She’s also experiencing some woeful marital troubles.

In the course of this riveting thriller, Lara will learn the significance of six musty Dictaphone cylinders recorded after D-Day by Noel Coward―actor, playwright and, secretly, a British agent reporting directly to Winston Churchill. She will understand precisely why that leather Bible, scooped up by the Nazis and deposited on the desk of Adolf Hitler days before he planned to attack Britain, played such a pivotal role in turning his guns to the East. And she will discover the new secret pact negotiated by the nefarious Russian president and his newly elected American counterpart―maverick and dealmaker―and the evil it portends.

Oh, and she’ll reconcile with her husband.

An Extract from The Bookworm

(Excerpted from The Bookworm by Mitch Silver, published by Pegasus Books. © Mitch Silver.  Reprinted with permission from the publisher. All other rights reserved. )

In a vast Stalin-era granite box several kilometers north of the capital’s outer ring road, Larissa Mendelova Klimt checked her cell phone one last time—nothing—before packing up the box for the return leg of her “daily commute.” Her routine never varied: pick up the yashchik in the morning, walk it along two rows of the Osobyi Arkhiv and then three rows over. Unlock the door to her carrel and set the box of old papers down on the desk. Turn on the light. Be seated. At night, pick up the box, lock up, and walk her burden back to its parking place with the other wartime files on the archive’s shelf.

She was feeling pretty good about herself. Other people went away for the summer, enjoyed the weather, swam at the seaside or in a lake, maybe. But Lara the Good Girl worked right here while Russia’s brief summer came and went. Unencumbered by her teaching load, she had waded through the captured Nazi documents in the box like an explorer. No, a cosmonaut—she was the Yuri Gagarin of academics, soaring through the unknown.

Take that day when she found two of the daily logs stuck together. Two not terribly significant days in May 1942, recorded down to the last, absurd detail by one of Hitler’s secretaries at the time, probably Johanna Wolf. Even as she carefully unstuck May 15 from May 16, she realized no Russian eyes had ever seen the page underneath; no Russian fingers had ever touched it. Of 150 million people, only Lara knew that Hitler had visited Wewelsburg to promote a cadre of SS officers at Himmler’s castle there before returning the same evening to Berlin by special train for a briefing on the Crimean offensive driving toward Baku. Okay, it was nothing special. Trivial, even. But it was all hers.

She knew what her friends called her: knižnyj červ. The “book- worm.” All they could see was the huge iron door of the Russian State Military Archive that closed behind her in the morning, never the enlightenment to be found within the heavily guarded Special, or Osobyi, section inside.

For the past eleven weeks, she had been doing exactly what she wanted to do. She spent nearly every waking minute plowing through the yellowed pages in this single box in the vast climate- controlled archive. Or else hunched over one of the preserved ’40s-era Dictaphone machines in the Listening Room twenty meters down the hall, as the voices of Hitler, Himmler, and Bormann dictated letters and summarized staff meetings on the hundreds of recordings liberated from the Führerbunker.

Even so, Lara had her reasons for being euphoric. She could tick off at least five of them on her fingers, starting with her thumb: with this last page, she had the whole dusty job of reading and translating behind her for another year. Index finger: she had her big definitive book, her Origins of the Great Patriotic War, all but written on the desk in front of her. Middle finger: Viktor was finally served with the divorce papers and she could move on with her life. Ring finger: Over the summer she had been named to fill the vacant chair in her department and would teach her initial class tomorrow as the country’s first full professor of geopolitical history. And pinkie: She had planned this summer’s work with her usual care, and had been rewarded by arriving at the last page of the Chronologies on September 8, the final allotted day. She had calculated it per- fectly, which just went to prove how weird the newly minted Lukoil Professor of Geohistory Larissa Mendelova Klimt—Lara to her friends—really was.

Still, as she gazed out the big, grimy window at the handful of people hurrying along the pedestrian walk of the Leningradskoye shosse on their way home and then down at the notes she’d tapped out on her iPad, she could feel the same old niggling doubt creeping back in. Is it worth it? Is this any way to spend a life, shutting yourself away in a musty archive?

Viktor certainly didn’t think so. One time she’d read him something she’d written and he’d given that little deprecating snort of his. “Ashes to ashes, dust to dust. What difference does it make?”

Was she divorcing Viktor because he was a no-good unfaithful bastard, or because she couldn’t bear to have him putting down her work? Did she surround herself with dead men talking because the actual live ones out there in the world were unknowable? From the time she’d been the tallest preteen in her srednyaya shkola in the closed city of Perm, Larissa had attracted the male gaze. But what, really, had they seen in her? Her nose was clearly too long, her teeth—though perfectly white and even—had a space in the middle, and her inky-black hair would never stay where she brushed it. Worse, out of her mouth would come what- ever she was thinking.

Lara returned her gaze to the single-spaced German record in front of her; she would read the last of the pages and deal with her life some other time. By now she knew Traudl Junge’s machine, the typewriter with the chipped apostrophe. Guess they couldn’t get new typewriters in the bunker by 1945.

And what was “A.H.” doing on April 21, the day after his birthday party and the last day of the Chronologies? Was he in the map room, planning to move up his nonexistent Southern Army to block the Russians at the gates to Berlin? No, he did that yesterday. Was he in the radio room, directing waves of nonexis- tent V-2s to wipe out the Red Army’s advance units (and most of the Berlin population)? He’d already tried that too.

Today he was playing with the Goebbels children. On other days, he’d show them Speer’s plans for the complete redesign of Linz, the Führer’s birthplace, into the new seat of Germanic culture. Today, though, he was back to playing with Tibet.

Fraulein Junge recorded it on the same onionskin paper she once used for councils of war: “1100 hrs. to 1215: A.H. again had us roll out the scale model of Lhasa to instruct the children on the beginnings of their race. How the gods had lived on the continent of Atlantis and how, when it succumbed to the Great Flood, they had moved to the lands of Thule and Ultima Thule far to the north. Then, when some of them had had carnal knowledge of mortal women, an elite priesthood of Nordics had taken refuge in another icy stronghold, in the Himalayas, and established their kingdom far beneath the surface of the earth.

“With that he delighted the children by lifting up the model’s mountains to reveal the magical city of the Aryans, the master race, as it had been recreated below. The little one, Heide, clapped her hands in joy as always.”

Lara shivered and let the flimsy paper drop from her hands. She knew that ten days later, her mother would crush cyanide capsules into the mouths of little Heide and her five brothers and sisters so they might all perish with the Führer.

Did Germany’s desire for lebensraum make the war inevitable? Or was it simply about one twisted, murderous man with unlimited power? One thing she did know: it was time to put the box back on the shelf and leave pure, unadulterated evil behind her for another year.

Mitch Silver is the author of the critically acclaimed In Secret Service (S&S). He an advertising agency creative director who lives in Rye, New York.

7 thoughts on “An Extract from The Bookworm by Mitch Silver”