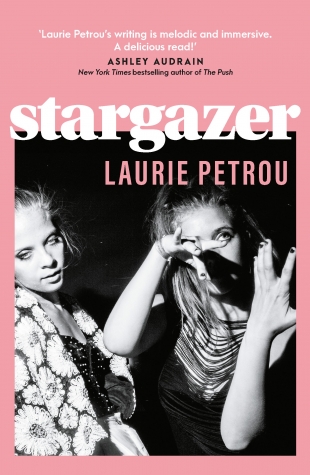 My grateful thanks to Hollie for inviting me to be part of the launch celebrations for Stargazer by Laurie Petrou and for sending me a copy of the book in return for an honest review.

Stargazer was published by Verve Books on 23rd June 2022 and is available for purchase through the links here.

IT’S A FINE LINE BETWEEN ADMIRATION AND ENVY.

Diana Martin has lived her life in the shadow of her sadistic older brother. She quietly watches the family next door, enthralled by celebrity fashion designer Marianne Taylor and her feted daughter, Aurelle.

She wishes she were a ‘Taylor girl’.

By the summer of 1995, the two girls are at university together, bonded by a mutual desire to escape their wealthy families and personal tragedies and forge new identities.

They are closer than lovers, intoxicated by their own bond, falling into the hedonistic seduction of the woods and the water at a remote university that is more summer camp than campus.

But when burgeoning artist Diana has a chance at fame, cracks start to appear in their friendship. To what lengths is Diana willing to go to secure her own stardom?

My Review of Stargazer

Diana needs an identity of her own.

My word. Stargazer is an absolute treat of a book. It’s beautifully written, perfectly crafted and affords an insight into a world of both the prosaic and the unusual so that all life feels present in this wonderful book.

In essence, with a couple of exceptions, very little happens and yet the plot is absolutely gripping because Laurie Petrou lays bare the human psyche with such dexterity that reading Stargazer becomes a mesmerising activity. Stargazer felt to me like a literary equivalent to viewing Leonardo da Vinci’s anatomical drawings except that here we are discovering Diana and Aurelle’s emotions layered beneath the narrative. They are both so vivid, so real and so disturbing that I think they will resonate with me for a very long time.

The theme of belonging is the catalyst for so much of Stargazer, but that is just one element underpinning how humanity takes what it wants from others before discarding them. Stargazer is profound as well as engrossing. The title is perfect. There are moments of literal stargazing where the majesty of nature is displayed, but in addition, so many of the characters are stargazing metaphorically. Diana watches the famous Taylor family next door at the same time as orbiting her brother’s place as her family’s shining star. Minor characters (like Grace) and the media are obsessed with the success and trappings of those stars they gaze upon and Diana’s sole aim is to be a star in her own right.

I’m aware I haven’t really reviewed Stargazer but it really is a book to absorb, to experience viscerally and to reflect upon rather than one that can be conveyed easily to someone who hasn’t read it.

I found Stargazer intense, affecting and dramatic. It vibrates with sexual and emotional tension, with longing and loneliness, jealousy, passions, love and hate so that reading it heightens every emotion in the reader. Stargazer is, in my opinion, an absolute masterpiece. I thought it was wonderful.

Laurie Petrou is an award-winning author, and Associate Professor at the RTA School of Media at Toronto Metropolitan University. She lives in Niagara with her family. Stargazer is her fourth book.

2 thoughts on “Stargazer by Laurie Petrou”