It’s far, far, too long since I stayed in with Rachel Abbott to discuss Come A Little Closer in a post you can read here, and so, with Rachel’s latest Tom Douglas psychological thriller out today, I simply had to invite her back to tell me all about it. Luckily Rachel agreed to come!

Staying in with Rachel Abbott

Welcome back to Linda’s Book Bag, Rachel. Thank you for agreeing to stay in with me.

Hi Linda – and thanks for inviting me. It’s great to be chatting with you, and I hope you and all your readers are coping well in these very difficult times.

I’ve brought Close Your Eyes to share. It’s the latest case for my favourite detective Tom Douglas, so it’s very close to my heart! It’s out in ebook, paperback and audiobook and it’s the 10th book in the series.

Close Your Eyes is out today isn’t it? Happy publication day. But your 10th book! My goodness Rachel, I have some catching up to do.

I find it almost impossible to believe that myself, to be honest!

They don’t have to be read in order, though. The only character in all stories is Tom, and each one is written from the point of view of the victim or perpetrator of a new crime, so you don’t need to know what’s come before.

That’s reassuring as I hear such wonderful things about your writing that I really want to dive right in. So, what can we expect from an evening in with Close Your Eyes?

Well, it’s a psychological thriller, so it’s probably as well to curl up with something to cling to for when it gets tense.

Like all the books in this series, it’s Tom’s job to solve the crime – in this case a murder which happens in the opening pages (so I’m not giving too much away!). But it becomes clear very quickly that the story is about much more than a dead body. Much of it is told from the point of view of Martha – a young woman who is suspected of the murder. All the evidence points to her, and she has no choice but to run.

At first, readers may think that Martha is aloof, distant, and probably quite a difficult character. But as the book progresses, they will hopefully begin to understand her as they discover more about her early life and what has brought her to this place and time.

That sounds fascinating. I love character driven books and I really like the sound of Martha.

I like to write about women who find themselves facing terrible dilemmas, who perhaps make mistakes, but who ultimately find strength they didn’t know they had. It’s a recurring theme in all my books – and even Tom sometimes has to make a difficult decision, because there are moments when the difference between right and wrong is blurred.

My lovely German Shepherd – Coco – is always close by. She brings herself along to most of my chats! After having a good sniff around my office for treats, she usually resorts to going outside to sit on the roof to ward off anyone who might disturb me! 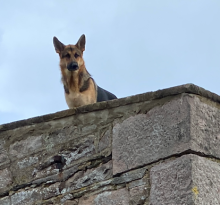 I hope she won’t be too disturbed by all the cat related item in my home!

And of course, what would a launch day be like without a glass of bubbles to celebrate with.

Well quite! I’m always ready for a celebratory glass of fizz.

I always try to thank my most supportive readers by holding a bit of a party on Facebook – lots of silly puzzles and quizzes to make them smile. They will be my guests today, and I’m grateful for their continued loyalty. I’ll be busy sharing the fun with them as I swig the occasional glass (and if I’m honest, probably eat a piece of cake or two).

It might be dark, cold and windy outside, but I’m snug and warm in my office – an old gunpowder shelter, a short walk from my back door.

As my home – a Victorian fort on the wonderful island of Alderney – was inhabited initially by Victorian soldiers and subsequently by German soldiers during the second world war, I am constantly expecting to hear whispered plots in my ear. It hasn’t happened yet, but some ghostly guests would be interesting too.

That office looks amazing Rachel. Thank you so much for staying in with me to chat about Close Your Eyes. It sounds brilliant and happy publication day again.

Cheers everybody and I hope you enjoy Close Your Eyes as much as I enjoyed writing it!

I’m sure we will. Here are the details everyone needs:

Don’t let him under your skin. He’ll destroy you.

Run. Never let him find you.

I thought I was safe here, but I’m not. I’ve stayed too long. Now Genevieve is dead, and the police are on their way. It’s time for me to go.

I must stick to the plan – the one I made the day I arrived in this city. My bag is packed. It always is. I will destroy every shred of evidence of my existence. The police must never find me. If they do, so will he.

I made a mistake, and someone had to die. But I’m the one who has truly lost her life.

I need to make a choice. If I keep running, I’ll never stop. If I go back, he will make me suffer.

How many lives can one person ruin?

Close Your Eyes is available for purchase here.

In 2017, following a five-way auction, Rachel Abbott signed a two-book deal with Headline Publishing Group. The first book, And So It Begins, was published in 2018 and features Sergeant Stephanie King. The second book in this series, The Murder Game was published in April 2020.

Her books have now been translated into over 20 languages.

Rachel’s writing career began in 2009, when she decided to write a book about an average, everyday woman facing a situation which gave her no option but to commit murder. In November 2011, Abbott published the story – Only the Innocent – on Amazon.

Abbott followed up Only the Innocent with The Back Road, Sleep Tight, Stranger Child, Kill Me Again, The Sixth Window, Come A Little Closer, The Shape of Lies, Right Behind You – and now Close Your Eyes. All her thrillers focus on relationships and crime, and feature the same detective, Chief Inspector Tom Douglas.

Rachel Abbott grew up near Manchester, England. She worked as a systems analyst, and then founded an interactive media company, developing software and websites for the education market.  She sold the company in 2000. Following the sale, she moved to Italy, where she restored a 15th-century Italian monastery that for a time she and her husband operated as a venue for weddings and holidays. She now lives and works on the Channel Island of Alderney in a Victorian Fort where she has an office in a former gunpowder shelter.