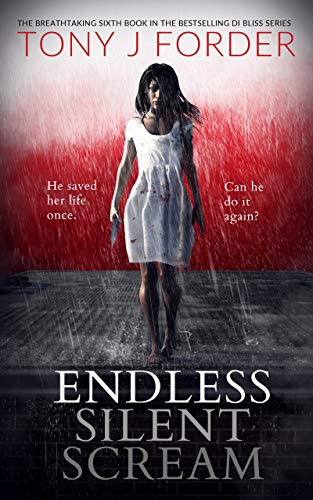 My enormous thanks to Sarah at Book on the Bright Side for inviting me to participate in this blog tour for Tony J Forder’s latest book, Endless Silent Scream, the sixth book in his DI Bliss series.

It’s been my pleasure to host Tony J Forder here on Linda’s Book Bag several times. I was lucky enough to ‘stay in’ with Tony to discuss Scream Blue Murder in a post you can read here and I shared my review of that book here.

Other posts include a guest piece from Tony about The Cold Winter Sun imperative you will find here, an inspirational post about becoming a writer here when Bad to the Bone was published, and Tony also told us about writing outside his comfort zone here and he allowed his characters Bliss and Chandler from The Scent of Guilt to introduce each other here.

From the author of the bestselling DI Bliss crime series comes another gripping police procedural thriller that will have readers hooked from the stunning first page to the very last.

He saved her once. Can he do it again?

When DI Bliss prevents fifteen-year-old Molly from jumping from a hotel roof, he has no idea their paths will cross again. A county lines mule, Molly is questioned by the drugs squad, but Bliss becomes convinced she is in danger and attempts to have her relocated. A local drug dealer and a London-based enforcer have other ideas.

Meanwhile, the remains of a freelance journalist are discovered alongside an archaeological find, which brings an old flame back into Bliss’s life. It’s only a matter of time before reports emerge linking the murdered journalist with the police, putting pressure on the Major Crimes team to find the killer.

Bliss is torn between the two investigations. Desperate to move Molly to safety before she can be reached by those who want her silenced, he is blinded to other dangers.

My Review of Endless Silent Scream

When DI Bliss rescues Molly from the roof top, a chain of events he couldn’t have foreseen ensues.

I thoroughly enjoyed Endless Silent Scream. Interestingly, during the time I was was reading the book there was a television programme about a murder and how it was solved. So many features of that programme were echoed by Tony J Forder’s writing that I was astounded by the authenticity and insight this book has. Although this is the sixth book in the DI Bliss series, the fact I haven’t read all the others made no difference. Bliss’s back story is woven in to Endless Silent Scream naturally so that I had enough information fully to understand his personality and reactions in this story.

The plot has all the elements that make for a fast paced and intriguing crime thriller and give a fascinating insight into the murky world of crime I’m glad I only have to read about. With themes and events linked to drugs, ethnicity, sex, violence, the media and everyday policing in twists and turns there’s something for every crime reader. Alongside the compelling and multi-layered plot there is such a warm underpinning of humanity through the protagonist that I thought elevated Endless Silent Scream above some other police procedurals I have read. I thoroughly enjoyed being shown the inner person behind Jimmy Bliss and the way in which his experiences in the job affected him. I felt Tony J Forder did this with such sensitivity and grace that he really brought home how human those we rely on to keep us safe truly are. Indeed, I felt quite emotional about Jimmy Bliss as the book came to a close!

I found the Peterborough setting fascinating. Although it wouldn’t have affected my view, Peterborough is my nearest city and I recognised the place so vividly through the writing. This enhanced my enjoyment further, but again, it wouldn’t matter if I’d had no knowledge of the area either because the sense of place is brilliantly created through Tony J Forder’s excellent writing.

Endless Silent Scream is a hugely entertaining crime story with enormous heart that is carefully crafted. Reading it has made me want to catch up with the entire series. I really recommend it.

Tony J Forder is the author of the bestselling crime thriller series featuring detectives Jimmy Bliss and Penny Chandler. The first four books, Bad to the Bone, The Scent of Guilt, If Fear Wins, and The Reach of Shadows, were joined by The Death of Justice, on 9 September 2019 with book number six, Endless Silent Scream, on 9 March 2020.

Tony lives with his wife in Peterborough, UK, and is now a full-time author. He is currently editing a new novel, and has also started on Bliss number 7, Slow Slicing. 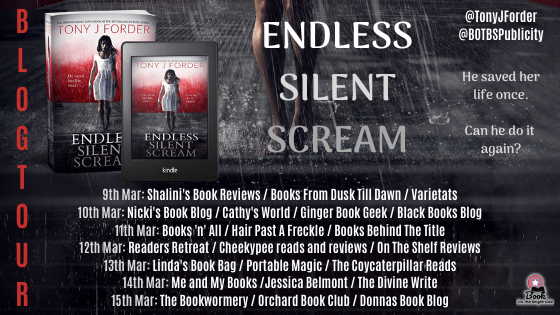