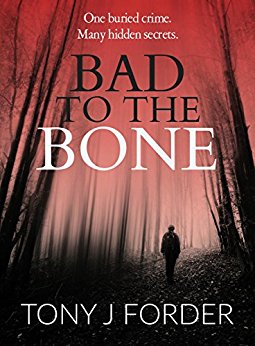 I’m delighted to welcome Tony J Forder, author of Bad to the Bone, to Linda’s Book Bag today as Bad to the Bone is set in my home town of Peterborough.

As an aspiring writer myself, I’m always interested in other author’s experiences and Tony tells me all about what has happened to him in a fascinating post.

Bad to the Bone was published by Bloodhound Books on 29th April 2017 and is available for purchase in e-book and paperback here.

Bad to the Bone

A skeletal body is unearthed in a wooded area of Peterborough, Cambridgeshire. DI James Bliss, together with DC Penny Chandler, investigate the case and discover that the young, female victim had been relocated from its original burial site.

A witness is convinced that a young female was struck by a vehicle back in the summer of 1990, and that police attended the scene. However, no record exists of either the accident or the reported victim. As the case develops, two retired police officers are murdered. The two are linked with others who were on duty at the time a road accident was reported.

As Bliss and Chandler delve deeper into the investigation, they start to question whether senior officers may have been involved in the murder of the young women who was buried in the woods.

As each link in the chain is put under duress, so is Bliss who clashes with superiors and the media.

When his team receives targeted warnings, Bliss will need to decide whether to drop the case or to pursue those responsible.

Will Bliss walk away in order to keep his career intact or will he fight no matter what the cost?

And is it possible the killer is much closer than they imagined?

My family and I moved to Peterborough as a temporary pit-stop almost thirty years ago, and here we are still. My crime thriller book, Bad to the Bone, is set in what I now regard as home, having spent the previous twenty-nine years living in London. Born and raised in the east-end, my dark, psychological crime thriller, Degrees of Darkness, due to be published by Bloodhound Books in September, is set there. For now, I am living the dream with Bad to the Bone, and I have to say I am astonished at how well it is doing and how well received it has been.

Whilst I started writing as a kid, and had some minor success with short stories – two being published by Pan Books in their Dark Voices series, and one in FEAR magazine – my novels were a fine example of being a ‘nearly man’: I nearly got myself an agent, nearly got myself a publisher, nearly got my book published. The first two books I wrote were part of a serious learning curve, and were both hugely derivative. Back then I was into dark fantasy and horror, and my style was an amalgam of all the authors I read in those days. I was a Frankenstein’s monster of a writer, but the one thing in my favour was that I recognised my own limitations.

Next up was my first attempt at Degrees of Darkness. A change of style and genre almost bagged me the agent, publisher, book deal. When that all fell apart, I moved on to a follow-up which deserved never to see the light of day. I then had an idea for a book set in Peterborough, and created a couple of characters by the name of DI Bliss and DC Chandler. The novel was decent, but it lacked a certain something. It still exists, and I may not be done with it yet. I was at the time, though, because by then the storyline for Bad to the Bone had seeped into my brain and I just had to write that.

Work commitments and ill-health meant that my writing was curtailed for some time. Until last year, when I was made redundant from my job after seventeen years. My wife wanted me to write, but bills still needed to be paid, so I set up my own IT consultancy business working in education, and planned to spend half my time with that and the other half doing what I liked most: writing. In preparation for the latter, I set up my social media presence and also self-published two of my completed novels.

In January this year I responded to a request for submissions by Bloodhound. The end result was a two book deal, followed by another contract for one more. Two of the three will be published this year, whilst the third is contracted to be a second book in the series started by Bad to the Bone.

Currently, I have that second book in the series at completed first draft stage. Prior to that I had previously written another book, a fast-paced action thriller, featuring a completely new set of characters. That is also at the same stage, and I have just started the first edit on it. It was intended to be a stand-alone, but in writing it I realised a couple of the characters had legs, and a storyline for a second book in what I hope will be a long-term project has been sketched out and will be started sometime this year. It’s funny how writing one book can set off a chain reaction, because in writing the follow up to Bad to the Bone I had enough steam to put together ideas for a third. That will also be started this year.

It never occurred to me how busy a part-time writer can be. Just keeping up with social media commitments can take up hours every day, especially when you have a new book. Pre-release promotion is essential, as you attempt to build up a level of anticipation. The cover reveal is great for that, and I got so lucky with mine as the cover for Bad to the Bone was wonderful. Then the blog tour is announced, and that gets some good coverage. Bloodhound also put out a video every month, which features the books due for release, so once again you’re building towards something positive. I wasn’t prepared for the reaction to my book, which has been far in excess of anything I had anticipated. Some great reviews, climbing up the Amazon charts, leads to an awful lot of ‘thank you’ posts on both Facebook and Twitter. And you want to do that – it’s not a chore at all. The bloggers and reviewers take time out of their lives to read your book and write their thoughts, and you can only ever be grateful to them for doing so. At my level, it’s lifeblood.

Then there are interviews to do, and if you’re lucky you’ll get asked to do a guest blog or two. I lucked out a while back and managed to secure not only a review of Mason Cross’s new book but also a Q&A session with him for my own blog. That was a real coup for me, as he’s one of my favourite new authors. He’s great guy, and I wish him continued success.

Another element that took me by surprise was the volume of literary events there are across the country. A staggering number. My health is still not as I would like, so I am limited and have to be selective. I have several trips booked, though: the Harrogate Crime Writing festival was a must-do, and I am there for all four days. My publishers recently announced an ‘evening with the authors’ event in London on 1 July, and I am there with some of my fellow hounds doing a reading and taking part in a Q&A session. No pressure there!

I can’t imagine what it must be like for one of the major authors. I mean, how on earth does someone like Michael Connelly find time to publish two books and produce Bosch for TV in 2017, as well as everything he must have to do for publicity purposes? He is certainly an author I admire.

This year has clearly started well for me. There is not a single part of it that I had anticipated, which goes to show how much life can change in just a short space of time. So far I have enjoyed every second. I know there are bleaker periods to come. Not every review is going to be a four or a five, but you put yourself out there and you have to take the rough with the smooth. There may be periods where my game goes off the boil, and I am prepared to push myself through that as well.

I love writing. I need to write. It’s as simple as that.

(And we all wish you every success with all you do Tony.) 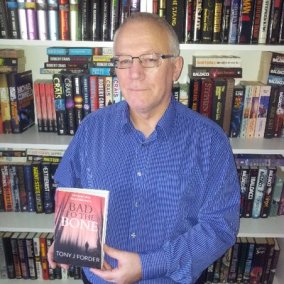 Tony Forder has been writing stories since childhood, but it was only when he won a short story competition judged by an editor from Pan Books, that he realised he might actually be half decent at this writing business.

As a part-time writer with a full-time job, plus some ill-health, life got in the way and, although Tony continued writing, it took a back seat to making a living.

This year, however, Tony has been inspired by new ideas, and has been working hard on two new books, at least one of which will be completed in 2017. In the meantime, he hopes you enjoy Bad to the Bone.

11 thoughts on “Becoming A Writer: A Guest Post by Tony J Forder, Author of Bad to the Bone”