My grateful thanks to author and illustrator Peta Rainford for sending me a copy of Milly’s Marvellous Mistakes in return for an honest review. I adore Peta’s children’s books and am even quoted on the covers of some! I have a review of The Niggle here alongside a smashing guest post from Peta about fitting illustrations to text in her books (although sadly the giveaway has now ended) and another review of Isabella’s Adventures in Numberland here. I also reviewed Peta’s Jacob Starke Loves the Dark here.

Out today, 20th February 2020, Milly’s Marvellous Mistakes is available for purchase in all good bookshops and online including here. 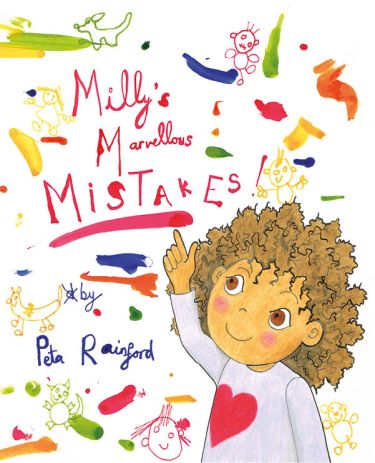 Milly’s Marvellous Mistakes is is a funny, rhyming picture book for the X Factor generation of children brought up to expect overnight success and instant gratification!

Milly May’s paintings are full of blots and smudges. She really WISHES she could do better. Then– hey presto! – her fairy godmother appears (looking a little bit like artist Frida Kahlo) and grants her wish.

But Milly soon discovers that unearned success may not be worth having and failure is not always such a bad thing.

This book would be great for early readers or as a bedtime story for children of around 4 to 8 years of age.

My review of Milly’s Marvellous Mistakes

Milly gets three wishes but they might not all bring what she anticipated.

The main message of Milly’s Marvellous Mistakes is to show children that it’s better to try and fail, than to achieve success through cheating and no real personal effort. It does so brilliantly. However, Peta Rainford also shows children value of true friends and that we can’t all be good at everything. In a world where so many just want to be a celebrity without purpose I think this is an essential message.

The manner in which the story is conveyed is excellent. There’s humour and excitement making for an entertaining rhyming narrative. The rhymes and rhythms make this book an easy one to read aloud with a child or for an emergent reader to tackle independently. Milly’s Marvellous Mistakes also helps develop language use because some of the words are more unusual, like ‘fret’, so that vocabulary is extended and there are homonyms like ‘amazed’ and ‘praised’ as well as pure rhymes like ‘spell’ and ‘well’ that help children understand spelling rules and experiment with their own language.

As I have come to expect with Peta Rainford’s children’s books, illustrations complement the text perfectly. There is a naive style that will appeal to children and Milly’s own pictures are of a standard that many will relate to, giving young readers status and self worth. I also like the fact that there are children of different ethnicities included and that Milly appears to be of mixed race as this better reflects the nature of society. Similarly, the good fairy isn’t a beautiful blonde, but rather a brown haired, thick eyebrowed person who seems far more realistic.

I really liked Milly’s Marvellous Mistakes. It would be smashing for home or school use as well as being simply an engaging story for all children. Great stuff!

Peta writes and illustrates her funny picture books on the Isle of Wight, where she lives with her husband, daughter, and hairy jack russell, Archie.

Peta loves going into schools to share her books and inspire children in their writing and art. She has appeared at a number of festivals and other events, including: Barnes Children’s Literature Festival, Isle of Wight Literary Festival, Exmoor Dark Skies Festival and Ventnor Fringe.

She is one of the organisers of the inaugural IW Story Festival, taking place in February 2020.