Almost exactly a year ago I reviewed a lovely children’s book by Peta Rainford, Isabella’s Adventures in Numberland, and you can read my review here.

Today I’m thrilled to welcome Peta back to Linda’s Book Bag with a guest post to celebrate her latest book, The Niggle. Peta is so talented as she both writes and illustrates her children’s books so today she’s telling us a bit about that process.

With Christmas coming up, what better time to have a giveaway and Peta has kindly offered the chance for you to win one of three signed paperback copies of The Niggle. You can enter at the bottom of this blog post.

Published by Dogpigeon, The Niggle is available for purchase from all good bookshops and Amazon. 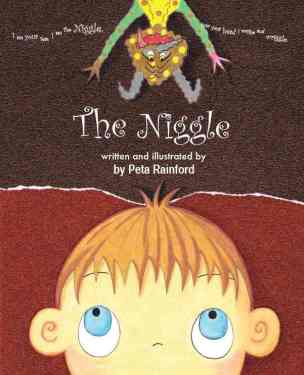 The Niggle tells the story of Joe Jackson, a little boy who has never felt fear. Until the day a miniature monster swims in his ear! The monster is the Niggle, a tiny terror, who whispers worries in Joe’s head and makes him afraid. Will Joe Jackson let the Niggle win? Or will he learn to overcome his fears? The Niggle, through humour and rhyme, tells young children that it’s OK to feel fear. In fact, you can’t be brave if you don’t. A colourful, rhyming picture book for 5-8 year olds.

Thank you so much to Linda for allowing me to be on her wonderful blog. I love the reviews on Linda’s Book Bag and really appreciate the fantastic support Linda gives to authors like me, so it is very exciting to be here.

(That’s very kind of you Peta and my pleasure to welcome you to the blog.)

Drawing pictures to fit the story

The pictures in my new book, The Niggle, are, stylistically, a bit of a departure from those in the three books that preceded it. I knew they had to be, because the subject of the book is different. Whereas the previous three books – Isabella Rotten Speller, Isabella’s Adventures in Numberland and Jamie and the Joke Factory – were about ideas (and pretty off-beat ones at that), The Niggle is about feelings.

(A rhyming picture book about childhood anxieties and resilience, aimed at children aged between five and eight, it tells the story of Joe Jackson, a little boy who has never felt fear… until the day the miniature monster swims in his ear! The tiny terror fills Joe’s head with doubts and worries, making him afraid of everything.)

So I knew from the start I wanted to use a form of illustration that was less quirky and stylised, slightly more ‘realistic’ and warm. So triangles have been replaced by more realistic body shapes, flat colours with shading, and although I have once again used collage, the cut-outs have been blended into the background.

Drawing pictures to extend the story

It’s probably stating the obvious but, as an author, being your own illustrator gives you a wonderful freedom; it’s a whole extra language with which to tell your story – or perhaps another story entirely! I love to introduce characters and scenarios into my illustrations that are not referred to in the text. Children are very quick at picking these sub-plots up. And very pleased with themselves when they do!

Another feature of my illustrations for The Niggle, which differs from those of my previous books, is that I have left sections on several pages uncoloured. I like the idea of children ‘completing’ these pictures in their heads. Or, possibly, actually colouring them in with their own crayons and felt tips. (Sorry, book-loving grown-ups!)

Probably the most important drawing challenge for this book was designing the character of The Niggle himself. He’s the first monster to feature in any of my books, so I quite literally started with a ‘blank page’.

I wanted the Niggle to be insidious. He has to look capable of worming his way through the smallest crack in our confidence – hence all the wiggly lines and the worm-like talons. But I didn’t want him to be a genuinely frightening monster. I want children to be able to laugh at the Niggle – laugh in the face of fear, if you like – so I gave him a rather vacant expression and lolling tongue.

I have to admit that I can’t take the credit for the colour scheme though – that was the work of my nine-year-old daughter. She coloured in one of my early drawings and I couldn’t better it! I love the colours she chose. Although they look quite jolly, I think there is something unwholesome about the combination of green, pink, brown and yellow. And I love the fact that she has given him spots, it adds a suitably putrid dimension, I think!

I don’t know which of the many picture book stories currently rattling around in my head I’m going to write next. Until I decide, I won’t know whether I’ll continue with this new style of illustration, revert to the old, more stylised approach, or go in another direction entirely. It makes for an exciting life!

(And both your words and illustrations make for exciting children’s books Peta!)

My Review of The Niggle

The Niggle is a smashing children’s story with a fantastic message about being brave and not letting your anxieties niggle away at you so that they prevent you doing what you want and need to do.

I thought the way in which Joe ages from two to six and goes from fearlessness through self doubt back to confidence was inspired, as the story gives an accessible and identifiable and positive message to children (and indeed I think some adults could benefit from this book too).

I loved the vocabulary as there is just the right balance of familiar language for children to understand enhanced by new words such as ‘flailed’ that will extend their vocabulary at the same time. The rhyme scheme is excellent too with super couplets throughout so that reading the story aloud has a vibrancy to it. Joe’s parts of the story contrast so well with the way the Niggle’s narrative is wriggly and untidy, fitting his character perfectly. The ending of the book when Resolve triumphs makes The Niggle a very satisfying book.

Peta Rainford’s illustrations are so well matched to the text. I especially liked the nod to Shakespeare’s Hamlet when Joe takes up acting and I thought having a female lifeguard provided a positive role model for all children. Some of the illustrations are left uncoloured giving an active dimension to the book too as children wouild enjoy colouring in the pictures making The Niggle part activity book too.

I’m really impressed by Peta Rainford’s children’s books and can recommend The Niggle most highly.

Peta moved back to the Isle of Wight in 2006, and it was here that Peta, now balancing the roles of freelance writer and mum, decided to write and illustrate her first book for children. It was a revelation: a way of combining picture making with her love of words – not to mention an outlet for her awful jokes. It may have taken more than four decades, but finally, Peta knows what she wants to do when she grows up.

The Niggle is the fifth picture book written and illustrated by Peta Rainford. Her other books are: Hairy Fairy, Isabella Rotten Speller, Isabella’s Adventures in Numberland and Jamie and the Joke Factory.

UK ONLY: For your chance to win one of three signed paperback copies of The Niggle, kindly provided by the author Peta Rainford, click here. Giveaway closes at midnight on 28th November 2017.

5 thoughts on “Giveaway: The Niggle by Peta Rainford”