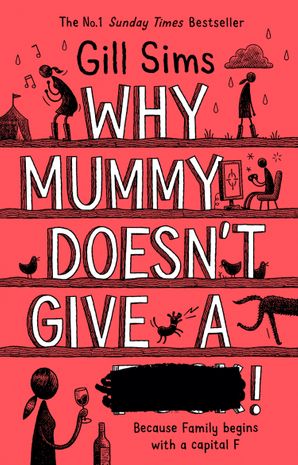 I so enjoyed other of Gill Sims’ books that, although I have banned myself from Netgalley,  I couldn’t resist accepting my lovely auto approval for Why Mummy Doesn’t Give A ****!. I’d like to thank Jasmine Gordon at Harper Collins very much indeed for sending it to me.

You can read my review of Gill Sims’ Why Mummy Drinks here, and of Why Mummy Swears here.

Why Mummy Doesn’t Give A ****! will be published by Harper Collins on 27th June 2019 and is available for pre-order through the links here.

Family begins with a capital eff.

I’m wondering how many more f*cking ‘phases’ I have to endure before my children become civilised and functioning members of society? It seems like people have been telling me ‘it’s just a phase!’ for the last fifteen bloody years. Not sleeping through the night is ‘just a phase.’ Potty training and the associated accidents ‘is just a phase’. The tantrums of the terrible twos are ‘just a phase’. The picky eating, the back chat, the obsessions. The toddler refusals to nap, the teenage inability to leave their beds before 1pm without a rocket being put up their arse. The endless singing of Frozen songs, the dabbing, the weeks where apparently making them wear pants was akin to child torture. All ‘just phases!’ When do the ‘phases’ end though? WHEN?

Mummy dreams of a quirky rural cottage with roses around the door and chatty chickens in the garden. Life, as ever, is not going quite as she planned. Paxo, Oxo and Bisto turn out to be highly rambunctious, rather than merely chatty, and the roses have jaggy thorns. Her precious moppets are now giant teenagers, and instead of wittering at her about who would win in a fight – a dragon badger or a ninja horse – they are Snapchatting the night away, stropping around the tiny cottage and communicating mainly in grunts – except when they are demanding Ellen provides taxi services in the small hours. And there is never, but never, any milk in the house. At least the one thing they can all agree on is that rescued Barry the Wolfdog may indeed be The Ugliest Dog in the World, but he is also the loveliest.

Although I usually find Gill Sims’ writing hysterically funny, this time, in Why Mummy Doesn’t Give A ****! there were fewer belly laughs but a more sophisticated and mature contemplation of Ellen’s life and the hazards of bringing up two recalcitrant teenagers whilst estranged from her husband Simon. Consequently, the themes felt more poignant so that I was increasingly emotionally connected to the narrative rather than simply giggling along to Ellen’s ‘FML’ comments.

The portraits of ‘moppets’ Peter and Jane are incredibly well drawn as they begin to stretch their adolescent wings. I was reminded of many of the youngsters I’ve taught in the past because their attitudes felt so real. On a more personal level, Jane’s acerbic comments to her mother still frequently go through my own mind at times, although thankfully I’ve learnt to keep them silent! I’m sure many a mother has wondered just how their son can eat quite so much as does Peter… What works so well is the fine line between wanting to be a grown up yet still remaining a child that Gill Sims presents so astutely in Jane and Peter.

I have always been dubious about Simon and I was actually pleased that he and Ellen had parted company as the main plot device in Why Mummy Doesn’t Give A ****!

However, it was Ellen who still appealed to me the most and I found her predicament of dealing with single motherhood, (along with another couple of stressful life altering events that I can’t say too much about for fear of spoiling the read), actually quite moving at times so that I shed the occasional tear. I thoroughly enjoyed meeting her more mature and contemplative persona and consequently she became a much more rounded and believable figure in my mind.

With the same effortless and conversational writing style, the plot of Why Mummy Doesn’t Give A ****! had greater depth than the other books in the series. I thought I’d guessed the resolution fairly early on, but Gill Sim kept me guessing with elements I really enjoyed and not everything worked out as I had imagined. There’s also less about extraneous characters and a more profound exploration of Ellen’s feelings and emotions so that I felt a greater affinity to the people this time.

Gill Sims is the author and illustrator of the hugely successful parenting blog and Facebook site ‘Peter and Jane’. She lives in Scotland with her husband, two children and a recalcitrant rescue Border Terrier, who rules the house. Gill’s interests include drinking wine, wasting time on social media, trying and failing to recapture her lost youth and looking for the dog when he decides to go on one of his regular jaunts.

You’ll find Gill on Twitter @whymummydrinks, and can visit Gill’s Peter and Jane Facebook page or read her blog.