You all know how much I love to travel and although Australia has been on my list, I’ve not yet made it to New Zealand. Consequently I’m delighted to welcome Kris Pearson to Linda’s Book Bag to stay in with me and chat about one of her books as she’s going to get me to New Zealand – albeit vicariously.

Staying in with Kris Pearson

Welcome to Linda’s Book Bag Kris. Thank you for staying in with me. Which of your books have you brought along to share with me and why have you chosen it? 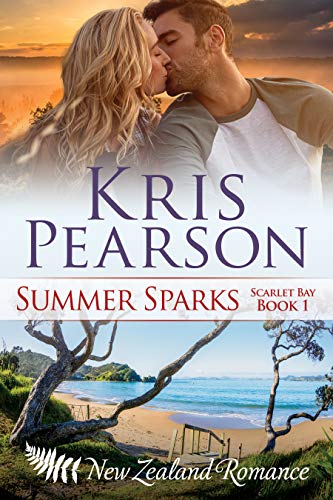 I’ve brought along the first in my Scarlet Bay series. It’s called Summer Sparks and it’s a sexy contemporary which introduces my readers to the Wynn family and the New Zealand holiday destination of Scarlet Bay (which doesn’t quite exist.)

(What a shame – I like the idea of visiting Scarlet Bay. I’ll just have to read Summer Sparks and travel through my reading.)

What can we expect from an evening in with Summer Sparks?

This is older daughter Anna’s story. She’s been hiding a shameful secret for fourteen years and it has turned her into a dutiful busybody. She unexpectedly meets a man who shakes her out of her comfort zone and demolishes her world as she’s known it.

(I know a few busybodies who could benefit from the same treatment Kris. I think I’d be very interested in Anna’s story.)

I also heard you like gardening so I also brought along some photos of my garden. 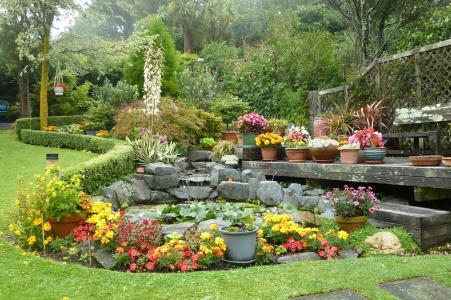 (What a beautiful space Kris. I’m not at all jealous. No. Definitely not. Not a bit. I do have that self same cat ornament in my own garden though…)

Just to make sure you’re really not jealous Linda, and knowing how much you love travel, I have also brought a photo my husband took looking our over Wellington Harbour too.

(That makes me even more jealous!)

Thanks so much for staying in with me Kris, to introduce your Scarlet Bay Series and Summer Sparks. Despite being insanely jealous of your beautiful photos I’ve really enjoyed our chat and I love the sound of the whole series. I have very much enjoyed our evening in. Good luck with the series.

A woman with a fourteen-year secret. A man with a harrowing past.

Jason’s dreams were ruthlessly crushed by his alcoholic father, but he’s finally become the man he always hoped to be – the strong, focused boss of his own construction company. Now, uptight interfering Anna Wynn is threatening to turn his life upside down.

Anna has arrived at the idyllic beach house to prepare for her wealthy family’s Christmas holiday. Big tough Jason Jones is right in the way – even in the bed she intended claiming as her own. She vows not to let this infuriating tower of testosterone upset her careful plans, but his rippling body and huge tattoo are hard to ignore.
Soon her closed-off heart is under siege from a man determined to break through her reserve. Enemies become lovers, but when her secret is revealed and her life is in tatters, will he be willing to pick up the pieces?

Summer Sparks is sexy, funny and heart-warming, and is intended for mature readers.

Kris was born to write – at twelve she completed her autobiography – an easy subject which required no research. It filled a whole school exercise book.

She lives in Wellington, the capital of New Zealand. She has used this lovely city as the setting for six of her novels – hot, passionate, contemporary romances full of love and laughter.

She’s taken readers to wider New Zealand for the three stories that make up her Heartlands series. This is where you’ll meet the girls and guys who live in remote country areas. She has also published two sheikh novels and has another waiting in the wings.

Her current series is set in Scarlet Bay – a beach holiday resort which doesn’t quite exist – but it would be a little north of Wellington if it did.

Her most widely distributed novel is The Boat Builder’s Bed. Gambling that people would enjoy it, she made it free for a while in 2011 when this was a new thing to do, and more than two million copies were downloaded in a few weeks which kick-started sales of all her others.

Her first proper job was as an advertising copywriter. After living in Italy and London she returned to the capital city of Wellington and worked in TV, radio, several advertising agencies, and then spent many happy years as a retail ad manager. Totally hooked on fabrics, she followed this by going into business with her husband as a curtain installer. (Obvious career progression!)

It was finally time to write fiction. In nineteen years she hasn’t fallen off her ladder once through drifting off into romantic dreams. All the places she’s visited and people she’s met on décor jobs have been wonderful inspiration for her settings and characters. She once stole a whole house, although politely ‘built’ an extra storey on to disguise it.

She writes sizzling contemporary romance, pure and simple. Well, maybe not that pure. They’re sexy stories about modern couples who fall in love and into bed along the way, just like real people do. She’s the author of fifteen novels so far, three of which were finalists in New Zealand’s full-novel Clendon Award. Four have been translated into Spanish, two into Italian, and one into Portuguese. Five are very close to being released in China. Because sexy stuff is not culturally appropriate in China, she was asked to create new ‘sweeter’ editions of these, and they’re also available in English under her (sweeter) author name of Kerri Peach.

Kris inherited her mother’s love of gardening, and has so many flowers that hay-fever is possible if you visit. She has a much tidier garden than house.

One thought on “Staying in with Kris Pearson”