I’ve had to be really strict with myself of late and not accept new books for review until I have got my TBR reduced, but oh my goodness, I think I shall have to make an exception for Rosemary in Bloom by Khristy Reibel. Khristy has written an absolutely intriguing guest post about the background to Rosemary in Bloom that I am delighted to share with you today. When you’ve read it you’ll know why I’ll be adding Rosemary in Bloom to my TBR…

Published by Open Books, Rosemary in Bloom is available for purchase here.

What if war separated you from your true love? What if you married the wrong man? What if the power of love brought you together again?

When Rosemary meets Albert it is instant chemistry. But it is also the summer of 1942, and scores of young men—Albert included—feel compelled to enlist to fight the war against Hitler. Albert wants to marry Rosemary before he leaves for Europe, but she just can’t commit. Like so many young women of her time, Rosemary finds herself left behind to work and worry, desperate for love but frightened of abandonment.

Three years later, and with Albert’s fate still unknown, Rosemary meets Harry, a charming and handsome man. Rosemary feels guilty for spending so much time with Harry, but she has all but lost faith that Albert will make it safely back home, especially when she receives news of her brother’s serious combat injury. Should she wait for Albert, or settle for second best?

Inspired by a true story, Rosemary in Bloom explores faith, forgiveness, enduring love against all odds, and the difficult decisions that strong, smart women on the home front had to make during World War II.

Family Secrets: the Inspiration behind Rosemary in Bloom

Every family has its stories: some funny, some heart-warming,and some that aren’t spoken but edge on consciousness. My grandparents held these stories that spurred my imagination.  My novel, Rosemary in Bloom, was inspired by their unspoken lives. The story follows Albert and Rosemary as they navigate the landscape of World War II and the aftermath.

When I was little, maybe six years old, my grandfather was sitting in his undershirt and I saw an ugly purple scar on his shoulder. It was gnarled and twisted.  When I asked him what it was, he replied, “An old injury.”  My mom later told me not to ask him about it because he got it in the war and didn’t like to talk about it. He died as I was learning about World War II, so I never got to ask him more about it.

When I was older, I would hang out with my grandma and drink beers. By this time, I knew that she had been married before my grandpa and that she had gotten divorced in the 1940’s, which was practically unheard of, especially in a Catholic family. The more she drank, the more she talked about her life in the 1940’s. I was hooked. She brought out pictures that I had never seen of her as a young woman. She was beautiful. I also got to read the only letter she kept from my grandpa when he was fighting in WWII. His words introduced me to a man I didn’t recognize— passionate and loving. I asked my grandma what happened. She said, “I wrote him a Dear John letter.”  I told her someone should write a book about her life.

So I did. Most of the details of Streator, IL are based upon my grandmother’s memories. Some of these places still exist in my hometown, and I went to them to put myself in Rosemary’s shoes.  For places that no longer existed, and to learn more about events that happened in town during WWII and after, I visited the Streator Historical Society. War bond drives, parades, the Cantina at the train depot that served troops heading to war – so many things I did not know about were preserved in photographs. The support Streator showed to our country during the war was not unique; it was happening in towns all across America. I felt inspired to share this rich patriotic history to others who, like me, may be unaware of how their towns had captured the spirit of love for one’s country.

Albert’s story was more difficult. My grandma had his bronze star and Purple Heart medals, but no information on where he had fought during the war. Since he never spoke to my grandma or any of his children about his experience in the war, I was at an impasse. I had no idea where to start. All I had was the letter my grandma saved. Written on Red Cross stationary, dated March 15, 1945, my grandfather wrote that he was somewhere in England. With a bit of luck and help from the internet, I came across a book written about the 304th Infantry. My grandpa was listed there as a Staff Sargent in Charlie Company who was the recipient of a Purple Heart. My heart skipped a beat when I saw his name in print, and I used this book as an outline for the movement of his unit and the battles they engaged in. Writing the chapters about my grandpa were very easy, as if he were helping me to write them.

Before my grandma passed away in 2011, she read the first two parts of the novel. With a wry smile, she said, “I don’t know about that Rosie character.”  Since my grandma was not emotional, I expressed emotions that I would have felt if I were in her situation. The character is a combination of my grandma and me.

Since this story was inspired by real people, I received some negative feedback from a few relatives when they previewed the story. My aunt, whose father was my grandma’s first husband, was upset at the portrayal of her father. I explained that he was based off of my imagination and was not intended to resemble the real man. My grandpa’s sister was shocked to discover that my grandpa and grandma knew each other before the war. Apparently, Albert implied that they met after. Oops… I spilled that secret!

The stories our families carry are fascinating, and often the most interesting are those that are not spoken. My grandparents’ secrets inspired me to write my novel, Rosemary in Bloom, revealing the hard decisions that had to be made during World War II and that love can endure anything. That’s what I took away from their story— the love that endured. In this way, Rosemary and Albert live on.

(Thank you so much Khristy, for such a fascinating  – and revealing – guest post. You have so stirred my interest in Rosemary in Bloom as I think it sounds just my kind of book.) 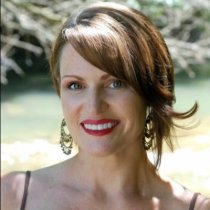 Now living in Las Vegas, Khristy Reibel grew up in rural Illinois and is still a Midwestern girl at heart. After graduating high school, she attended the University of Illinois where she received a B.S. in Marketing, which enabled her to hone her writing skills by creating advertising copy for a trade show company. In 2008, she enrolled at UNLV and later graduated with an M.Ed. In addition to writing, she now teaches high school English and German. She believes that teaching students to support their ideas in writing is the most important skill she can help them to learn.

6 thoughts on “Family Secrets: the Inspiration behind Rosemary in Bloom by Khristy Reibel”