It was back in April when Joan Moules first stayed in with me here to discuss Script for Murder. Today Joan is coming back to tell me all about some new releases so let’s see what she’s brought along to share today.

Staying in again with Joan Moules

Welcome back to Linda’s Book Bag, Joan. Thank you for coming back.

Tell me, which of your books have you brought along to share this time and why have you chosen it?

I’ve brought two books along because both were published at the beginning of July by Williams and Whiting.

Firstly, Daisy is about a woman who  wakes up in hospital with no memory of who she is, what she was doing on a train with no identification on her and with a large sum of money in an obviously new handbag.

(What a totally gorgeous cover Joan.)

Here is a short piece from Daisy.

The following day they brought her an obviously new, stone coloured handbag.  She opened it eagerly but there was nothing in it to identify her.  It contained a Yardley powder compact and lipstick, a brown comb, two plain white handkerchiefs and one other with daisies on. The only old item in the bag was a purse/wallet containing three hundred pounds.  It was brown leather and well worn.  There were no diaries, photographs, driving licence, names or addresses, and the bag itself, shoulder strap style, was the type available at most large stores.

She looked at Sister with tears in he eyes.  ‘Are you sure it’s mine?’

‘No, my dear.  But it is the only one not claimed.  There are also two suitcases.  A blue one and a brown one I think it was, but you can see them later.  Right now the best thing you can do, and I know it won’t be easy, is to rest and wait.  The human mind is a wonderful machine, and rest is a marvellous cure.  What you are experiencing is a temporary condition, believe me.  Meanwhile you suggest a name we can call you for the moment.’

If Sister had expected her to come out with her own name without thinking she was disappointed.

‘I don’t know.  You’ll h-have to do it for me.’ And she  covered her face with her hands and sobbed.  As Sister handed her one of the handkerchiefs from the bag she said, ‘How about Daisy – there are two embroidered on this, and it is a pretty name.  Come now.’ And she put her arm around the heaving shoulders, ‘in a day or two you’ll remember, or someone will enquire about you.  You must have patience my dear.’

(This is wonderful. I really want to read Daisy now! Which other book did you bring?)

The other book is called Venetian Magic, and tells the story of  Cathy who accepts a six month job in Venice when she and her fiancé break up and she loses her job.  Venice is a city she had long wanted to see and she thinks it will give her a spot of alone time and a chance to sort out plans for her changed future.  Two men enter her life while she is there, yet neither could tell her their real reason for being in Venice and the trio become involved in a robbery and a kidnapping before the end of that summer in Venice.

(I love Venice and the though of being transported back there by reading Venetian Magic is so appealing Joan.)

Cathy was thrilled with the atmosphere of Venice from the moment she walked down the steps of the station to stand on the banks of the Grand Canal.  The steps and the immediate waterfront were cluttered with pigeons, but there before her was Venice, and for the first time in weeks she felt an excitement stirring in her veins.

The canal traffic was busy, motorboats and gondolas making a contrast with each other and with the ancient and modern aspects of the city. Everywhere it seemed there were flowers; they tumbled down terraces and balanced on balconies.  As the boat moved through the water she didn’t know which side of the canal to watch.  Some of the buildings were shabby and some were splendid, and she glimpsed tantalising alleyways, shops, art galleries and museums.

The boats on the canal hooted noisily as Cathy, oblivious to the conversation around her, gazed at the panorama, at the sights and sounds, but especially the colours of Venice, the peach, terra cotta, the soft pinks and browns glowing in the romantic Venetian light.

It did not seem far to Mary’s place.  Guy pulled in by the landing stage, resplendent with red and white ‘barbers sign’ poles.  He helped them both out, and then once more took Cathy’s cases, carrying them into the dark entrance hall of the flat that was to be her home for the next few months.

‘Thank you, Guy, see you later,’ Mary said when he kissed her and raised his hand in a farewell salute to Cathy.

‘Whenever you’re ready, nice to have you back again.’

They travelled in the lift to the apartment where Ginette the housekeeper was waiting to greet them.

‘I heard the launch and knew it must be you, Signora.  Welcome, welcome, it is good to see you.  I have the kettle on,’ she added, beaming at her employer.

Mary kissed the dark eyed little woman on both cheeks.  ‘Thank you, Ginette.  This is my niece, Cathy Maddoc.  She will be my secretary until Pippa returns.’

(This sounds so good. I’m not sure I should allow you to torment me with two books!)

Last time, you brought very welcome Bailey’s and After Eights Joan. What else have you brought this time and why?

This time Linda I have brought you  a bunch of sweetpeas,  some pictures I took on one of my visits to Venice, and some sugared almonds which the shopkeeper put into a cradle of pink net and tied with a silver ribbon.  I do love the way that every purchase, however humble, is enhanced by such pretty packaging.  I was fortunate each time I visited because I had friends living and working there and they took me to many of the untouristy spots of the city as well as the well-known ones. 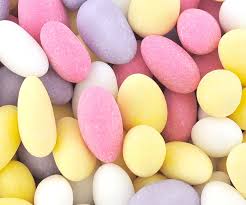 (I’m so jealous of you having friends in Venice. It really is a city I love. Thanks for the flowers and almonds too!)

One true story from my second visit involves an amazing coincidence. This time I was with my husband and daughter and we were boarding a waterbus.  In the rush to get on they were a little ahead of me and by the time I was aboard they had secured seats on the bench at the end.  As I emerged from the melee they waved and indicated the place next to them which they had put our bags on to save for me.  On reaching it the man and woman sitting next to them greeted me with, ‘Hello Joan, how lovely to see you.’   They were two English writers I had met the year before on my first visit.  They were the only people I knew in Venice apart from our friends and I wouldn’t dare to put it in a book because readers’ might not believe it. It is absolutely true however. The only two people I knew who lived in Venice and I had met once the year before were on that crowded waterbus, at the height of the tourist season and sitting next to my husband and daughter who were so surprised when they greeted me by name. I wonder what the odds on that happening are?

(That’s incredible. But I do believe you because a similar thing happened to me. I was on holiday with my parents in Pitlochry in Scotland when I was 13 and we met some people at the B+B we were staying in. Three years later we were in the queue for check in for a flight to Austria and the couple standing right in front of us were the same people. We hadn’t seen or heard from them in between!)

It’s been lovely having you back Joan. Thanks for returning.

Linda it has been great talking to you about favourite places and writing books. Thank you for hosting such a lovely evening Linda. 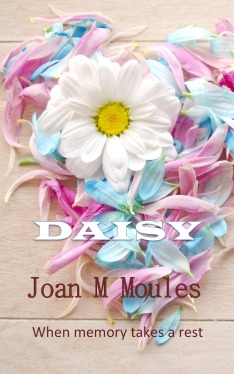 Robert’s marriage had been in trouble before he met Clare. Deeply in love, he and Clare decide to leave London for a new life in Devon. But their train crashes and Robert is killed. Injured and suffering from memory loss, Clare is taken to hospital, where the nurses call her ‘Daisy’. All ‘Daisy’ knows of her past is that she is wearing a new-looking wedding ring.

Then she meets Julien – but how can she commit herself to him when she already has ties?

Daisy is available for purchase here.

Venice was a city Cathy longed to visit, and when the opportunity of a temporary job arose she was thrilled. Two men entered her life that summer, yet neither could tell her their real reason for being there. Grant Taggart and Scott Underwood fell in love with her and she became romantically involved with them both. The trio became mixed up in a robbery and a kidnapping before the end of that summer in Venice.

Venetian Magic is available for purchase in paperback here and e-book here.

Joan M Moules is the author of over twenty-five fiction and non-fiction books in a variety of genres. She also writes short stories and articles, runs occasional day workshops and is passionate about her writing. Joan is a member of The Society of Women Writers’ and Journalists, Society of Authors, The Crime Writers Association and The Deadly Dames.

Joan Moules lived in London from 1940 to 1945 before returning to Hastings. From working in various offices she was plunged into the life of a busy shopkeeper when she married. Joan lives by the sea in Selsey, Sussex. She has two daughters, five grandchildren and two cats. Among her many other interests are reading, walking, the theatre, music hall and Victorian jewellery.

You can find out more by visiting Joan’s Jottings.

One thought on “Discussing new releases with Joan Moules”