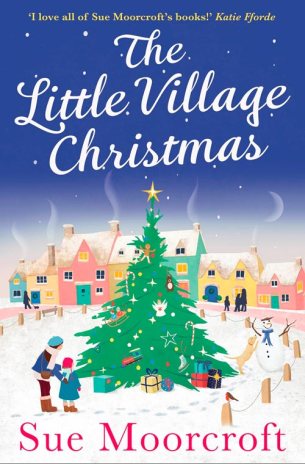 Regular readers of Linda’s Book Bag might be forgiven for thinking I’m a little bit obsessed by Sue Moorcroft. I’ve met Sue several times and had the chance to interview her here, and have previously reviewed Sue’s The Christmas Promise here, and Just for the Holidays here. As well as all that, Sue has told me about her fantasy holiday companions here too!

Today I’m delighted that Sue is explaining a little about the village concept behind her latest book, The Little Village Christmas.

The Little Village Christmas was published by Avon Books, an imprint of Harper Collins, on 9th October 2017 and is available for purchase here. 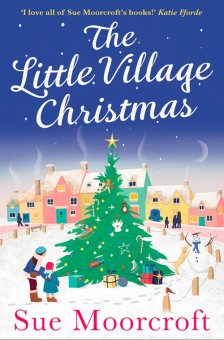 Alexia Kennedy has lived in the little village of Middledip all her life – and now it’s time for her to give something back. As an interior decorator, she’s been tasked with turning the village’s neglected Victorian pub into a community café that everyone can use.

After months of fundraising by all the villagers, Alexia can’t wait to get going – but disaster strikes when every last penny is stolen. With Middledip up in arms at how she could have let this happen, Alexia feels ready to admit defeat.

But help comes in the most unlikely form when woodsman, Ben Hardaker and his rescue owl Barney, arrive on the scene. Another lost soul who’s hit rock bottom, Ben and Alexia make an unlikely partnership. However, they soon realise that a little sprinkling of Christmas magic might just help to bring this village – and their lives – together again…

Although every book I publish is ‘standalone’, not depending on any book that’s come before, I do like to write linked books. A linked book is one where the central characters are new but you might find a few places or people that have popped up in my earlier books.

The Little Village Christmas is the story of what happens to Alexia when she agrees to manage the refurbishment of an old forgotten Victorian pub in the village so it may become The Angel Community Café. It’s to be her swan song, a pro bono project to put the cherry on the top of her portfolio as an interior decorator ready for her to take on a new, exciting role with an east London team.

Until someone runs away with all the money.

As two of her greatest friends, Jodie Jones and Gabe Piercy are the worst affected (and also because the east London concern dumps her) Alexia shelves her plans to leave the village to help stage a rescue.

Ben Hardaker has taken a job in the woods of a nearby estate, not feeling particularly sociable since his marriage broke up, threatening his other family relationships and causing him to sell up and move away from home. As he’s Gabe’s nephew he’s unwillingly involved in Alexia’s plans and inexorably brought out of his cottage in the woods.

The whole plot depends upon a charming village setting, where people know and like each other or know who to avoid and get caught up in each other’s lives. ‘Aha,’ I thought. ‘I already have a village in my head and its map is drawn in one of my A3 pads …’ Regular readers will have encountered Middledip village before. It’s surprising how often characters come from, end up, or simply live there. I found a few changes had come over the village since last time I visited – the village hall has had to close, Gwen has left the shop and her place taken by nosy Melanie and renamed ‘Booze & News’ – but it was such a pleasure to see a few old friends. Gabe and his recalcitrant pony, Snobby; head of the village hall committee, Carola, whose decorating skills finally come into their own; and Tubb from the pub, who never really changes.

The village has taken Ben to its heart, calling him ‘the wizard in the wood’ because of the injured owl he’s caring for, and protecting him when someone comes to the village looking for him. He comes to feel so at home that he even chooses to stay there for Christmas and discover what a village Christmas is really like. It’s kind of the opposite of Alexia, who had expected to leave in the New Year …

(And now you’ve got us all intrigued Sue!)

Award winning author Sue Moorcroft writes contemporary women’s fiction with occasionally unexpected themes. The Wedding Proposal, Dream a Little Dream and Is This Love? were all nominated for Readers’ Best Romantic Read Awards. Love & Freedom won the Best Romantic Read Award 2011 and Dream a Little Dream was nominated for a RoNA in 2013. Sue’s a Katie Fforde Bursary Award winner, a past vice chair of the RNA and editor of its two anthologies.
The Christmas Promise was a Kindle No.1 Best Seller and held the No.1 slot at Christmas!
Sue also writes short stories, serials, articles, writing ‘how to’ and is a creative writing tutor.

24 thoughts on “Love A Village Book: A Guest Post by Sue Moorcroft, Author of The Little Village Christmas”