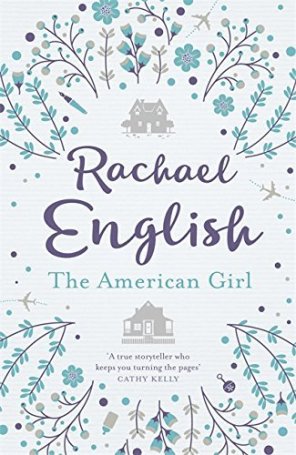 Regular Linda’s Book Bag followers will know that I’m AWOL from blog tours, guest posts and interviews this month whilst I try to read some of the books that have been sitting on my TBR for ages.

The American Girl, by Rachael English is a relatively new addition but as Rachael has been kind enough to send me a couple of her books in the past I thought I’d begin with her latest novel. I cannot thank her enough for sending me a copy in return for an honest review.

The American Girl is available now in e-book and for paperback pre-order here.

Boston 1968. Rose Moroney is seventeen, smart, spirited – and pregnant. She wants to marry her boyfriend. Her ambitious parents have other plans. She is sent to Ireland, their birthplace, to deliver her daughter in a Mother and Baby home – and part with her against her will.

Dublin 2013. Martha Sheeran’s life has come undone. Her marriage is over, and her husband has moved on with unsettling speed. Under pressure from her teenage daughter, she starts looking for the woman who gave her up for adoption more than forty years before.

As her search leads her to the heart of long-buried family secrets, old flame Paudie Carmody – now a well-known broadcaster – re-enters the frame.

From Boston to rural Ireland; from Dublin back to Boston, The American Girl is a heart-warming and enthralling story of mothers and daughters, love and cruelty and, ultimately, the embrace of new horizons.

My Review of The American Girl

When Rose finds herself pregnant at the age of 17 in 1968, society will not accept the situation and her parents send her away. These actions will reverberate through the decades.

Oh my goodness I loved this book. Everything about The American Girl made it just the kind of read I adore. I’m sure there’s something in the water in Ireland that makes for natural storytellers as Rachael English certainly knows how to create a plot that holds the reader completely enthralled. I genuinely felt devastated when I’d finished as I didn’t want the story to end. The American Girl was one of those books that made me resent normal life when it prevented me from reading it.

Firstly, the plot of The American Girl is brilliantly constructed with shocks and surprises along the way and a devastating insight into the mind set of the 1960s. Although I could understand the actions of Grace and Ed I simply couldn’t forgive them and this set up my emotional engagement with the whole of the story so that I felt completely invested in what happened to Martha.

The quality of Rachael English’s writing is just gorgeous. She balances a lightness of touch with humour through absolutely pitch perfect dialogue so that the emotional elements are heightened further. The variety of paragraph and sentence length gives a naturalness that I found utterly beautiful and absorbing. The deftness of description added depth to make the characters and settings so realistic that I could hardly bear to tear myself away from them.

It is the characters that make The American Girl such a wonderful book. These are not two dimensional sketches on a page, but real and warm people who engendered a whole range of emotions in me as a reader. Cat gave me hope and entertainment. I loathed Rose’s parents without mercy and found myself far less forgiving and accepting of them than she is. I loved Martha without reservation, even when I felt she didn’t always behave perfectly as in her desire to run her daughter, Evanne’s, life. I was so angry with the treatment of the girls in the convent that I almost felt murderous towards the nuns. Indeed, it was the exploration of the roles of women that drew me in to The American Girl so unfailingly. I could see my own flaws, hopes, desires and needs reflected even though I have no experience of similar situations. Rachael English has held up a mirror to the souls of women that I found held me in thrall. I was completely captivated.

I genuinely loved The American Girl. Part love story, part tragedy, part social history, it is a book that will remain in my heart for a very long time.

Rachael English is the author of three novels: Going Back which was shortlisted for the most-promising newcomer award at the 2013 Bord Gáis Irish Book Awards, Each and Every One which like Going Back was a top five bestseller in Ireland, and, The American Girl.

Like many authors, Rachael also has a day job and is a presenter on Ireland’s most popular radio programme, Morning Ireland.

10 thoughts on “The American Girl by Rachael English”