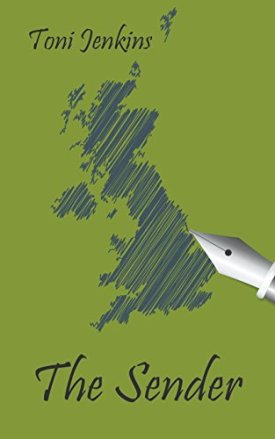 Almost a year ago I went to a blogger and author meet up in Edinburgh organised by fellow blogger Joanne of Portobello Book Blog where I met lovely Toni Jenkins, author of The Sender. Toni kindly sent me a copy of The Sender along with an envelope bearing a question mark with instructions not to open it until I’d read the book.

As many of you know, life got the better of me last year (see here) and I’ve been taking off April from my usual blogging in order to catch up with books that have been sitting on my TBR for ages. Although Toni wrote a fabulous guest post in a letter to her younger self all about writing for Linda’s Book Bag that you can read here, I’m ashamed to say that it is only now that I have got round to reading The Sender.

Can an inspirational card from a secret sender really help change your life? For Abby, Kat, Patti and Tessa, it seems to hold that extraordinary quality. The card instructs each woman to hold it in their possession for six months before sending it on, with an invitation to meet the sender two years from the date of its inception.

From Edinburgh to Glasgow, York to Cambridge, the card is sent on a journey to impart its magic.

But who is the sender and what was their motive? And why were they the chosen ones?

My Review of The Sender

When the sender realises that Abby is in dire need of support, they send her an anonymous card with a four leaf clover attached and instructions to hold on to the card for six months before sending in it to someone else.

What a lovely concept for a novel. Recipients receive an anonymous card containing a good luck symbol, a four leaf clover, that they retain for six months and then send on so that there is love, hope and support weaving around the world just when those receiving the card need a boost most in their lives. I thought this was such a smashing idea.

In effect The Sender is a series of novellas that are connected through the women sending on the card. Each would stand as a highly entertaining story in its own right but Toni Jenkins cleverly weaves the strands of their stories together until the point the main characters all meet and have a ready made friendship and support group.

There is an eclectic cast of characters so that there is someone for every reader to relate to. I especially liked Rina and Flo, who, whilst at opposite ends of the age range, were women I felt I’d have liked to know in real life.

The themes encompassed are those that we will all have encountered at some point. Those themes of grief and friendship resonated particularly for me and I really felt that The Sender was a book I should have read sooner so that I could have had benefit from its hope and optimism. Other concepts explored include adoption, infidelity, divorce, business, success, illness, childbirth, travel and so on, so that what Toni Jenkins has done is create in microcosm an entire world where readers can identify with something that affects them. The Sender provides a positive experience through an engaging narrative where characters have real-life struggles. I liked too the sense of mystery at wondering who had sent the original card.

The Sender reminds readers that, in an increasingly hostile and violent world, there is still the power of love, hope and friendship. I’m so glad I’ve read it. 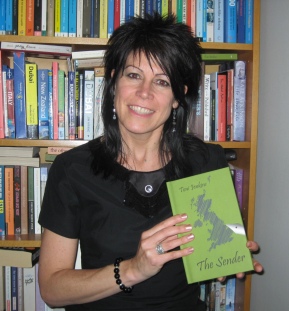 Toni’s passion for writing began when she was 9 years old and bored on a long car trip. With a notebook and pen in hand, she began writing comedic poems to pass the time and discovered a great love of playing with language and personifying objects, creating Walter Wall who yearned to travel and Debbie Drawing Pin who feared being typecast!

Over the years she ventured into short stories and began collecting and writing quotes, amassing hundreds of them since her childhood. Finally, in her early thirties, she took the plunge and wrote her first novel, cementing her desire to write contemporary fiction.

She lives in the city she fell instantly in love with in the mid-nineties, and is proud to call Edinburgh and the UK her home.

Sending on The Sender!

In the spirit of The Sender, I would like to pass on my signed copy to someone recommended by a reader of Linda’s Book Bag. If you feel someone you know (and you can email me their address) deserves to receive The Sender please comment below. I’ll put the names in a hat on 30th April and draw out the winner. Once I have the recipient’s address I’ll send them The Sender along with a lovely handmade card that Toni sent to me. They won’t know where the book has come from.

31 thoughts on “The Sender by Toni Jenkins”