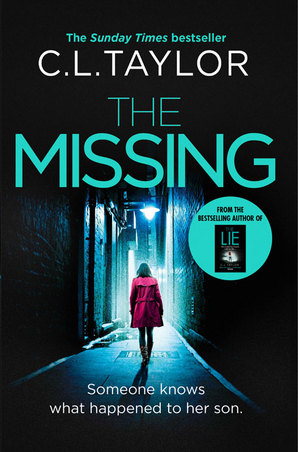 I’m thrilled to be part of the launch celebrations for C.L. Taylor’s gripping new novel The Missing which was published on 7th April 2016 by Avon Books, an imprint of Harper Collins. The Missing is available for purchase on Amazon, from WH Smith, Waterstones and all good book shops.

C.L Taylor reveals that her childhood has quite a bit to do with her ability to instill fear in her readers today, as she tells us the three things that used to frighten her and I imagine many of us will have similar experiences!

You love your family. They make you feel safe. You trust them.

When fifteen-year-old Billy Wilkinson goes missing in the middle of the night, his mother, Claire, blames herself. She’s not the only one. There isn’t a single member of Billy’s family that doesn’t feel guilty. But the Wilkinsons are so used to keeping secrets from one another that it isn’t until six months later, after an appeal for information goes horribly wrong, that the truth begins to surface.

Claire is sure of two things – that Billy is still alive and that her friends and family had nothing to do with his disappearance.

A mother’s instinct is never wrong. Or is it?

Three Things That Terrified Me As A Child

As a child I loved hand puppets and putting on a show for my parents. However, I was secretly terrified of my clown puppet who I christened ‘Ginger’. I became convinced that , if I didn’t say goodnight to Ginger before I went to bed, he would do something horrible to me while I slept!

I loved Dr Who as a child – still do – but the theme music scared the hell out of me. It got so bad that I’d run out of the room the second the music started to play and my mum would have to call me back in when the programme began.

One of my grans lived in a farm house in the Worcestershire countryside. I’m not sure how old it was or what its history was but I’m pretty sure the junk room was haunted. The junk room was a room down a corridor from the living room, just off the stairs. It was largely used as a storage room but also contained my gran’s big box freezer. Whenever gran was cooking and she’d ask me to get bits and bobs from the freezer fear would strike my heart. There was something in the junk room – something on the opposite side of the room from the freezer. I couldn’t see anything but I could feel it watching me from the second I stepped into the room. The energy was most definitely malevolent and I’d get in and out of that room as quickly as I could. I never told anyone about my fear of the junk room for fear they’d laugh at me. Many years later I confided in my sister that one of the rooms at gran’s house had scared me as a child. “Me too,” she looked at me with big eyes. “The junk room…”

C.L. Taylor studied for a degree in Psychology at the University of Northumbria, Newcastle then moved to London to work as a shipping co-ordinator for a medical publishing company. Made redundant after two years she re-trained and moved to Brighton where she worked as a graphic designer, web developer and instructional designer over the course of 13 years. She currently works 4 days a week as a Distance Learning Design and Development manager for a London university, looks after her toddler son 3 days a week and squeezes in writing her novels when she should be sleeping.

You can follow C.L. Taylor on Twitter and find out more about her on her web site.

Be sure to find out more with these other bloggers too: 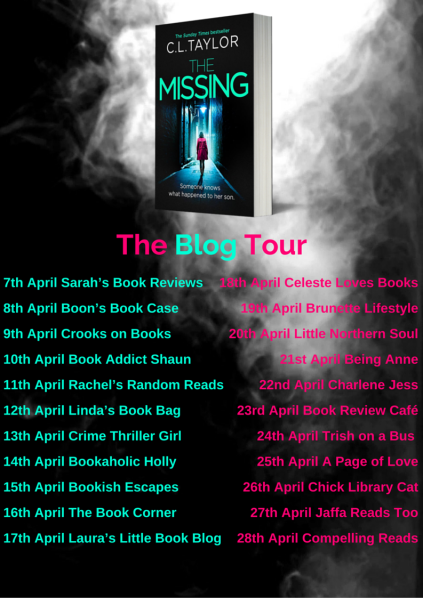 5 thoughts on “The Missing by C.L. Taylor”