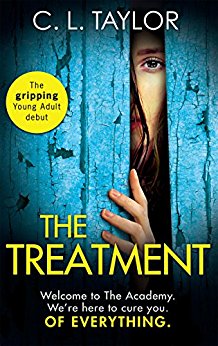 Many readers will be thoroughly familiar with C.L. Taylor’s adult fiction and indeed, will remember a fabulous guest post from Cally on Linda’s Book Bag that you can read here from when The Missing was released.  Today, however, thanks to the author herself, I’m delighted to be reviewing the first of C.L. Taylor’s young adult (YA) books, The Treatment.

The Treatment will be published by HQ Young Adult, an imprint of Harper Collins, on 19th October 2017 and is available for pre-order here.

“You have to help me. We’re not being reformed. We’re being brainwashed.”

All sixteen year old Drew Finch wants is to be left alone. She’s not interested in spending time with her mum and stepdad and when her disruptive fifteen year old brother Mason is expelled from school for the third time and sent to a residential reform academy she’s almost relieved.

Everything changes when she’s followed home from school by the mysterious Dr Cobey, who claims to have a message from Mason. There is something sinister about the ‘treatment’ he is undergoing. The school is changing people.

Determined to help her brother, Drew must infiltrate the Academy and unearth its deepest, darkest secrets.

Before it’s too late.

My Review of The Treatment

When her brother Mason is incarcerated in the Residential Reform Academy, Drew realises he’s in considerable danger and sets out to try to rescue him.

I thought The Treatment was brilliant. If this is what Young Adult fiction reads like then I need to read more of it. There’s no dumbing down of plot, theme or character in The Treatment; just fabulous writing that engages and enthralls from start to finish.

From opening quite literally with a bang, the plot of The Treatment races along at a breathtaking pace so that I had to put down the book a few times to give my thumping heart a rest. I think it’s because the events are actually extremely plausible and there’s real fear in realising we could easily head towards similar establishments as the Residential Reform Academy. There are surprises along the way so that I was brought up short a couple of times too, adding to the immense enjoyment of this book.

I loved the characters. Each is well defined and so realistic. It felt perfect to see the events through Drew’s eyes, especially when there is the contrast of the more usual events in a teenager’s life, such as her difficult relationships with her peers, against the horror that is the Residential Reform Academy. Even the most minor people add depth and texture to a cast of completely believable people.

However, it was the themes that really hooked me. Our desire to conform, or to make others conform to what we decide is right, bullying, relationships and societal expectations and norms are all thoroughly explored so that not only is The Treatment hugely entertaining as a read, it’s also highly thought provoking.

I’d love to see The Treatment as a film because I have a horrible feeling some adult readers might dismiss it as a YA book not weighty enough for an adult audience, and they would be wrong, but might be hooked by a film and then read an amazing book. The Treatment is a narrative with depth, excitement, brilliantly developed characters and themes that affect all our lives. I really recommend it for all thriller lovers – regardless of age. 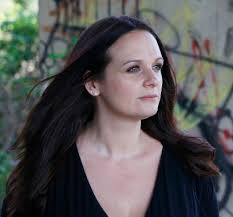 C.L. Taylor studied for a degree in Psychology at the University of Northumbria, Newcastle then moved to London to work as a shipping co-ordinator for a medical publishing company. Made redundant after two years she re-trained and moved to Brighton where she worked as a graphic designer, web developer and instructional designer over the course of 13 years. She currently works 4 days a week as a Distance Learning Design and Development manager for a London university, looks after her toddler son 3 days a week and squeezes in writing her novels when she should be sleeping.