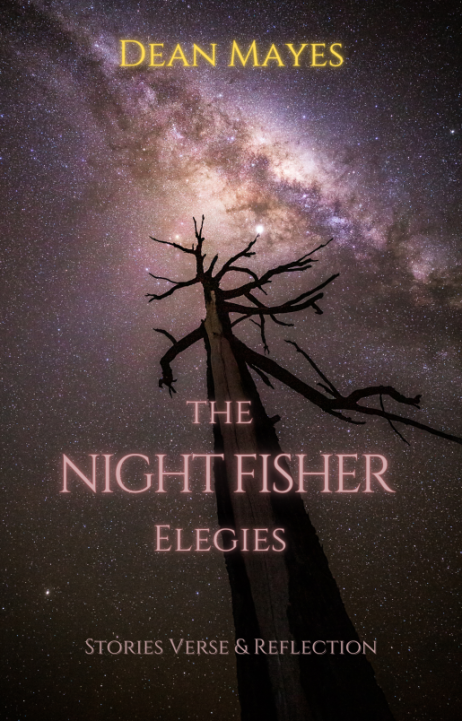 I’m a huge fan of eclectic collections and when I heard about Dean Mayes’ The Night Fisher Elegies I knew I had to feature it on Linda’s Book Bag even though I simply couldn’t fit in a review. It’s a privilege to host an extract from the book today.

It’s over four years since I stayed in with Dean to chat about another of his collections, The Artisan Heart in a post you’ll find here.

The Night Fisher Elegies is available for purchase here.

Taking the reader on a journey through love, faith, death, grief, family and dreams, The Night Fisher Elegies weaves together powerful explorations of humanism, moments of reflection tinged with melancholy and short verses, which inhabit the sometimes brutal landscape of self examination. Dean wanders through a palace of memories contained within nostalgic love, experimenting with style, tone and character. He poses questions for the reader to ponder and wrestle with and offers pieces designed to evoke and provoke, while others are simply present as meditations to inspire and affirm.

An Extract from The Night Fisher Elegies

This is what I know about Arnold Webb.

He was a bushman first, brought into the world with an axe in his hand. He was no stranger to hard work and toil. He wore sweat on his brow with pride — in fact, he relished it.

His hands were calloused, and though Arnold’s hands were bushman’s hands, his fingers were long, delicate even. Legend had it that he could play Rachmaninoff better than Rachmaninoff himself.

His arms were solid, his shoulders broad. But you would never see him without a tie or his moth eaten Harris tweed — even if he was chopping wood or digging a trench or milking a cow. Sometimes Arnold wore a bow tie, usually on special occasions, but he would often surprise you with his tendency to wear one day to day — just because he felt like it. His beard was thick, yellowed at the corners of his mouth from years of tobacco stains. His silver hair was perpetually entangled with saw dust — or dandruff. It was probably saw dust.

When he smiled, you expected to encounter a hollow maw, or jagged tombstones, but Arnold had a perfect set of pearly white teeth that he swore were his own.

Arnold lived on Russell’s Creek Road, beyond the bitumen, beyond civilisation on a plot of rolling land thick with eucalyptus. There, Arnold rebuilt his childhood home — then a two roomed cottage — into a grand house, with a wrap around verandah, a corrugated iron roof and pretty curtains in the windows he’d sown himself. The house boasted fireplaces in each room and an iron stove in the kitchen. Yet, he was content with an earthen floor. Despite encouragement and offers of help to do so, he only decided to lay boards down in the last years of his life, because his bones grew tired of the uneven floor. He couldn’t believe he had gone without them for so long.

There on his little plot, Arnold raised his chickens, milked his cows, sheared his sheep and sawed his timber, deriving a small income from the products of his labours but subsisting on a tradition of rural bartering and his own dogged independence. He grew vegetables where vegetables shouldn’t grow. Pumpkins and potatoes of impressive size. Tomatoes and carrots of unrivalled quality. Everyone wanted to know his secret. Of course, he wouldn’t share it.

Arnold drove an EH Holden with venetian shades in the back window. The glossy, sky blue panelling and chrome he kept buffed to a shine. The white walled tires were as new as the day they had been fitted. The engine purred. The Holden was his pride and joy. You could always tell it was Arnold driving because he only ever drove at 20 miles an hour — even when he was in a hurry. He was never late for an appointment. He planned his journeys well in advance and those journeys were rare.

The most precious thing Arnold had was his companion — a sleek red fox he had reared from a pup. The fox was tame, uncannily obedient and was, according to Arnold, the finest sheep dog he had ever owned. It had a luxuriant red coat, a bushy tail and vivid, piercing eyes. The fox accompanied him everywhere. It had a basket in the back window of the Holden and whenever Arnold turned up anywhere, you could see curled up on a crocheted blanket.

Arnold had trapped its mother years before and he’d felt guilty upon realising animal was pregnant. Arnold delivered the pup himself. He couldn’t bring himself to euthanize it, so he took the pup home and raised it, nurtured it and trained it. Not once did it ever attack Arnold’s chickens or sheep or cows. It protected Arnold’s home from its vantage point on the front porch beside Arnold’s rocking chair.

While Arnold remained a confirmed bachelor, it was said his heart had been broken once. A woman of means and spirit who had turned his head and rendered him love struck. The grand house he had built had been for her and he’d decked it out with all the accoutrements she had asked for. He’d even positioned the master suite so that it overlooked the valley — the best view in the district. But she didn’t stay. No-one was quite sure why. Rumour had it that she had lost a baby. That she’d had second thoughts about country life and had returned to the City. Suffice it to say, after she’d gone, Arnold closed his heart and he never spoke of her again.

Arnold died alone — or so I’d heard. He’d fallen asleep in his rocking chair — an antiquarian copy of Tolstoy in his lap, a bottle of Cabernet and a half empty tumbler at his side. Arnold had simply never woken up. Weeks had passed before anyone realised. When he was found, the fox was still at his feet, surrounded by chicken feathers. Evidently, its animal instinct had not been completely buried. It had bared its teeth when the ambulance officers attempted to remove Arnold’s body and only took flight when the police constable drew his weapon.

No-one claimed Arnold’s property. Apparently, he had a sister but she never appeared. When solicitors met to discuss his will, it was discovered Arnold Webb was independently wealthy. He’d been a stockbroker in times past and had amassed a fortune on the back on some very canny investments. Still no-one emerged to secure his inheritance.

Beyond the bitumen on Russell’s Creek Road, the house stands in the quiet. It is slowly being reclaimed by the bush. The curtains in the dust covered windows are moth eaten now, like Arnold’s Harris tweed. A swarm of bees have taken up residence in the corner of the verandah. The cows and the sheep have long gone. A rooster and a hen remain in the coop and have produced several offspring.

At night, you can hear the sounds of the bush. The wind rustling through the eucalyptus. The babbling of the creek. The calls of so many birds. The grunts of Sanbar up on the ridge.

And the plaintive cry of a fox.

I love that! I have a feeling that The Night Fisher Elegies is exactly my kind of read.

Dean Mayes is an Intensive Care Nurse who is fascinated by philosophy and the paranormal, so his stories weave an element of magical realism with deep humanism. He grew up near Melbourne, Australia, and now lives in Adelaide with his wife, Emily, his children, Xavier and Lucy, and his writing partner – a 10 year old spaniel named, Sam. Dean loves outdoor cooking, anything to do with Star Wars and (insanely) long-form podcasts.

An Intensive Care Nurse with over 15 years of clinical experience in adult, paediatric and neonatal medicine, he can often be found lying on a hospital gurney at 3 in the morning with a notebook in hand, madly scribbling ideas while on his break.