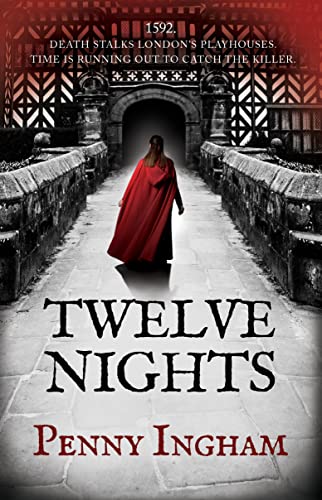 It’s some months since Penny Ingham kindly sent me a copy of her latest book Twelve Nights and I’m delighted finally to share my review today.

Twelve Nights was published on 6th May 2022 and is available for purchase here.

The year is 1592. William Shakespeare and Christopher Marlowe light-up the Elizabethan playhouses. At the ‘Theatre’, eighteen-year-old Magdalen Bisset fashions costumes for the charismatic players, and navigates their rivalries and petty jealousies.

But her own life is far from glamorous. She works long hours to provide for her frail, elderly grandmother and, as an unmarried woman without means, Magdalen’s role at the ‘Theatre’ unjustly brands her ‘the players’ whore’.

And then her friend, John Wood, dies on stage and her life will never be the same again. Accused of his murder – for everyone knows poison is a woman’s weapon – Magdalen must risk everything to clear her name for all other roads lead to the gallows.

My Review of Twelve Nights

Maggie is accused of murder.

Twelve Nights is a maelstrom of historical fiction that blends real and imagined characters and incidents into a totally immersive and fascinating read. From the very beginning Penny Ingham places her reader at the heart of her settings with such evocative descriptions created through her use of the senses that it is impossible not to feel as if you are part of Magdalen’s world. Similarly, I found the author’s sentence structure and her use of dialogue perfectly attuned to the era so that I felt as if I’d had the opportunity to travel back in time to the murky world of Shakespearean theatre, heat filled taverns and Machiavellian politics. The research Penny Ingham must have conducted to bring alive the times so evocatively is exemplary.

There’s a cracking plot in Twelve Nights as Maggie attempts to prove her innocence of John Wood’s murder and I loved the fact that Penny Ingham illustrates that we need to be careful what we wish for, setting up this new series with aplomb. It’s quite hard to say too much without spoiling the story for others, but the scope for future narratives is richly prepared. I also found elements of the story truly infuriating as the sexism, superstitious attitudes towards women and the dismissive treatment of others by those with power, felt all too real and still far too resonant in today’s world.

Although I thoroughly enjoyed meeting familiar names like Shakespeare, Burbage and, especially, Marlowe, it is Magdalen who steals the show as the lynchpin of the story. What works so well is the depiction of Maggie’s daily life as a lowly woman of the time. Through Maggie we get a vivid understanding of the era whilst meeting a principled, feisty, strong woman who is rounded and well developed as a character.

Sense of history, and strong engaging plot and characters aside, what I so enjoyed about Twelve Nights was the thematic exploration. There’s religion, race, gender, politics, trust, loyalty, betrayal, relationships, feminism – all the aspects of a modern world so cleverly woven into this historical story. I was thoroughly entertained, but equally unsettled by the comparisons I was able to make with today’s society. Penny Ingham may have written a compelling narrative but she’s also proved beyond doubt that history does indeed repeat itself. Great stuff.

Penny Ingham is married with two grown up children, and lives in rural Hampshire. Penny blames her passion for writing historical novels on her father. When she was a child, he would find any excuse to drag Penny and her friends up Iron Age hillforts whilst regaling them with stirring tales of the British tribes’ valiant battles against the invading Romans. As a result, Penny is a keen amateur archaeologist, happy to find herself at the bottom of a muddy hole with a trowel in her hand. She says the best find she’s ever unearthed is piece of Roman armour, at Fishbourne Roman Palace.

Penny has been writing all her life in some form or another. She worked for BBC local radio, had a stint in theatre PR, taught English in adult education, and was also a newspaper TV critic with a brief to be as controversial as possible!