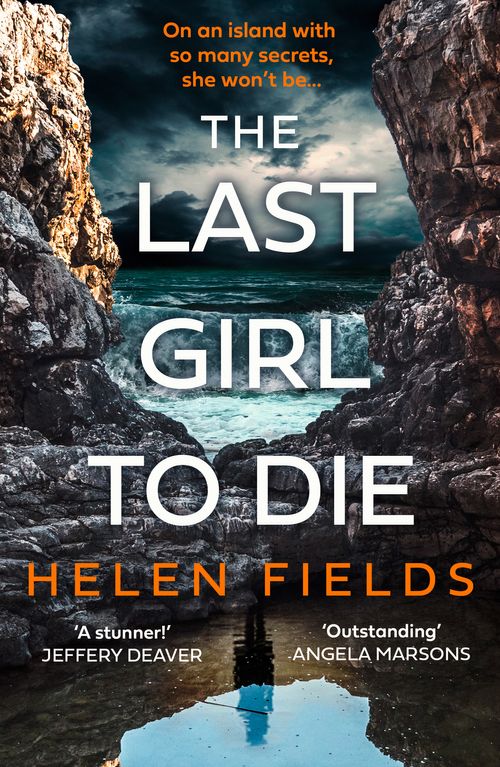 It’s ridiculous that it’s five years sine the fantastic Helen Fields appeared on Linda’s Book Bag with a superb guest post to tie in with Perfect Prey that you can read here. I’m delighted to correct that by sharing an extract from Helen’s latest book, The Last Girl to Die, as part of the blog tour. My enormous thanks to Olivia Collier at Midas PR for inviting me to participate. I’m thrilled that I have The Last Girl to Die on my TBR too.

Published by Avon Books on 1st September 2022, The Last Girl to Die is available for purchase through the links here.

The Last Girl to Die

‘A stunner! I guarantee you’ll put everything on hold until you arrive at the shocking final scenes. Without a doubt, one of the best crime novels of the year!’ – No.1 international bestseller Jeffery Deaver

In search of a new life, seventeen-year-old Adriana Clark’s family moves to the ancient, ocean-battered Isle of Mull, far off the coast of Scotland. Then she goes missing. Faced with hostile locals and indifferent police, her desperate parents turn to private investigator Sadie Levesque.

Sadie is the best at what she does. But when she finds Adriana’s body in a cliffside cave, a seaweed crown carefully arranged on her head, she knows she’s dealing with something she’s never encountered before.

The deeper she digs into the island’s secrets, the closer danger creeps – and the more urgent her quest to find the killer grows. Because what if Adriana is not the last girl to die?

An Extract from The Last Girl to Die

Humans and animals share a remarkable number of traits. They have the capacity to parent well, but sometimes they just up and leave. They can be kind, not only to their own species, but to others. They know fear, but they can be courageous. They experience both pleasure and pain. Animals grieve just as people grieve. They squabble and play for power. Some can be cruel. Cats play for hours with half-dead mice, tigers kill for sport, humans kill for sexual pleasure and dominance.

Hypocrisy, though, is an exclusively human trait.

The day Adriana Clark arrived in Tobermory, a line of teenage girls sat along a harbour bench and declared her showy and pretentious as they clutched their fake designer bags, their makeup copied from online tutorials, so much applied that it was a challenge to see bare skin. They said she loved herself, as they tossed their hair and watched passersby for any sign of admiring glances. They said she thought she was something really special, as they ignored the square girls, the ugly girls, the not-so-skinny girls who walked on by. They said they bet Adriana was a right bitch.

The Blether was no more of a sanctuary. Young men muttered to girlfriends that the new barmaid was a cold fish after they’d spent time trying to catch her eye while ordering a pint. Older men whispered to their wives that Adriana was sure to be trouble, as they waited for the long darkness of night to imagine themselves next to her warm, youthful body. Women welcomed her to their isle, to her new job, to the community, even as they wished she hadn’t come, knowing their partner’s eye had strayed. Older women muttered and tutted to themselves about Americans, remembering the war, all the while wishing they’d had a chance to travel and explore new shores.

Visitors came and went, leaving a trail of destruction along with much-needed money. They patronised the islanders, consigned them to the murky depths of parochialism. Drove too fast on narrow roads, left too much rubbish, trod down tender plants. But they bought mementos and guidebooks. Paid for meals at the pubs and overnight stays at guest houses. Treated the island like a plaything, then moved on.

Perhaps that was why the foreigners had not been entirely welcomed. They had yet to prove their permanency, to show they’d come with the right attitude to island life.

The priest, Father Christophe – himself a relative newcomer in island terms – had issued requests for the Clarks to be welcomed. If he’d taken the opportunity to tell the odd tale about how he’d found Americans to be morally wanting in the past, so what? If he’d made Adriana feel uncomfortable about the length of her skirt, or the tightness of her top, in the course of a discussion in the confessional, wasn’t he just doing his duty to God and the community?

Harris Eggo, the island’s most senior police officer, longed for more. To have risen through the ranks in one of Scotland’s cities, with crimes to solve that were so much more than joyriding, drunk driving, petty theft and closing-time violence. Yet here he was, wishing Adriana’s death had fallen at the feet of some other policeman. As much as the Major InvestigationTeam was overseeing the case from their comfortable mainland station, he was left with the dirty end of it. The suspicion, the anger and the rising froth of vigilantism. Here it was, his chance to shine, and all he wanted was to turn out the light and go back to bed.

The island watched and wept.

Oo. I am SO pleased I have The Last Girl to Die on my TBR!

Helen Fields’ first love was drama and music. From a very young age she spent all her free time acting and singing until law captured her attention as a career path. She studied law at the University of East Anglia, then went on to the Inns of Court School of Law in London.

After completing her pupillage, she joined chambers in Middle Temple where she practised criminal and family law for thirteen years. Undertaking cases that ranged from Children Act proceedings and domestic violence injunctions, to large scale drug importation and murder, Helen spent years working with the police, CPS, Social Services, expert witnesses and in Courts Martials.

After her second child was born, Helen left the Bar. Together with her husband David, she went on to run Wailing Banshee Ltd, a film production company, acting as script writer and producer.

Helen self-published two fantasy books as a way of testing herself and her writing abilities. She enjoyed the creative process so much that she began writing in a much more disciplined way, and decided to move into the traditional publishing arena through an agent.

Perfect Remains is set in Scotland, where Helen feels most at one with the world. Edinburgh and San Francisco are her two favourite cities, and she travels whenever she can.

Beyond writing, she has a passion for theatre and cinema, often boring friends and family with lengthy reviews and critiques. Taking her cue from her children, she has recently taken up karate and indoor sky diving. Helen and her husband now live in Hampshire with their three children and two dogs.