It’s not often I’m star struck but I have to confess that today is one of those days as I welcome Perfect Prey author Helen Fields to Linda’s Book Bag with a guest post all about the effects of crime. I’m also somewhat excited to be starting off the launch celebrations for Perfect Prey.

Perfect Prey is the second in the terrifying DI Callanach crime series, published by Avon, an imprint of Harper Collins and is available for purchase through the publisher links here. 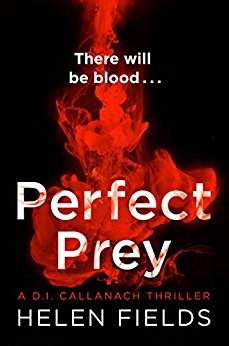 In the midst of a rock festival, a charity worker is sliced across the stomach. He dies minutes later. In a crowd of thousands, no one saw his attacker. The following week, the body of a primary school teacher is found in a dumpster in an Edinburgh alley, strangled with her own woollen scarf.

DI Ava Turner and DI Luc Callanach have no motive and no leads – until around the city, graffitied on buildings, words appear describing each victim.

It’s only when they realise the words are appearing before rather than after the murders, that they understand the killer is announcing his next victim…and the more innocent the better.

The Effects of Crime

I’m often asked if I have nightmares. I have frequent dreams about getting stuck in large, dark houses and trying to escape, but I think these are stress related. For me, crime writing is more of an outpouring. However gruesome the content, I feel better once I’ve produced my daily 2,000 words. Usually I can switch off from the subject matter of my books easily. It’s the real life perpetrators that bother me. The mechanics of a crime are one thing – weapons, injuries, forensics – these things should shock us all when a life is taken. But for me the horror is found within the heads of the attackers. If you could hear their inner voices, listen to the vicious, disturbed jumble of thoughts, planning and justification, you might never read crime again. I worked in the criminal justice system for 13 years, prosecuting and defending. I spent time with both victims and perpetrators. What I can say, is that some of the latter seem not to occupy the same world as the rest of us.

The books I write are often described as dark and disturbing. They’re meant to be, but never gratuitously. I write with an understanding of how it feels to be a victim. I write having spent time with parents whose children were the victims of serious crimes. I never forget that there are real people out there who have suffered. But readers like to be scared, shocked and horrified. That’s why crime is the biggest selling genre. So do I have boundaries, things I just won’t write about? As a mother, I find it incredibly hard to write scenes where children are hurt. It’s too close for comfort. That’s not to say I’ll never find a storyline where I won’t find it necessary but to date I haven’t. Sexual assault scenes are rightly sensitive. So many women (and increasingly more men) are the victims of sexual assault that it’s a difficult thing to use the subject matter as something we regard broadly as “entertainment”. For me, those scenes in literature have to have a clearly defined purpose and are usually better explored “off camera”. You don’t have to show a rape scene to have your police officer/profiler/friend character investigating the rape.

When I’m in the flow of writing and describing a particularly awful event or scene, I’ll sit with tears streaming down my face. That has to be the case, I think. If I can’t move myself while I’m imagining torments, then I won’t be able to adequately affect my readers. Also, we shouldn’t grow too tough to be moved by such things. Crime books should push us to our emotional limits, not dull our senses.

I am constantly impressed by our police and our legal system. When I worked inside it, all I saw were the holes and flaws. Now, researching from the outside, it’s easier to be kinder about it. It’s a bloody job. There is very rarely a win. Getting a conviction after a successful case is wonderful, but there are still victims. A prison sentence may fulfil a need for justice but it cannot erase the memories or the scars or give a life back. I do prefer to have a sense of natural justice to my books, but it’s with a nod to reality. In the real world, things never work out quite perfectly. They shouldn’t in books, either.

Helen Fields’ first love was drama and music. From a very young age she spent all her free time acting and singing until law captured her attention as a career path. She studied law at the University of East Anglia, then went on to the Inns of Court School of Law in London.

After completing her pupillage, she joined chambers in Middle Temple where she practised criminal and family law for thirteen years. Undertaking cases that ranged from Children Act proceedings and domestic violence injunctions, to large scale drug importation and murder, Helen spent years working with the police, CPS, Social Services, expert witnesses and in Courts Martials.

After her second child was born, Helen left the Bar. Together with her husband David, she went on to run Wailing Banshee Ltd, a film production company, acting as script writer and producer.

Beyond writing, she has a passion for theatre and cinema, often boring friends and family with lengthy reviews and critiques. Taking her cue from her children, she has recently taken up karate and indoor sky diving. Helen and her husband now live in Hampshire with their three children and two dogs.