The genres that don’t feature on Linda’s Book Bag nearly enough are fantasy and young adult fiction, so it gives me great pleasure to welcome D. A. Mucci to the blog today to tell me all about one of his books. Let’s find out more:

Staying in with D.A. Mucci

Welcome to Linda’s Book Bag David and thank you for agreeing to stay in with me.

Today I’m sharing with you the Young Adult Lit fantasy book: Ignatius and the Swords of Nostaw.  It was released in October 2021.

I don’t read much fantasy David. How did Ignatius and the Swords of Nostaw come about?

In addition to being an author, I’m an emergency room physician.  When the pandemic hit, my wife encouraged me to write the book I had been thinking about writing for years. With everything shut down, professional sports, theater, even dinner out with friends, my wife saw that I needed something to immerse myself in to take my mind off the horrors I was seeing in the ER.  So I dove into writing my story.  My co-workers would ask how the book is going and I would share some of the story with them.   One of my co-workers even started writing her own book.  When you work in a stressful environment, it is important to have a passion that you can work on that helps you get the stresses off your mind so you don’t burn out.  Writing was my way to do that.

I can’t imagine what an awful time you must have had. How wonderful that something so creative came out of such horrors.

What can we expect from an evening with Ignatius and the Swords of Nostaw?

This story is filled with a very diverse set of characters embroiled in a fantastical adventure.   There are all kinds of unlikely heroes and characters of all ages, genders races, ethnicities, abilities and disabilities. I wanted every reader to have a character they could identify with, not necessarily like them since there are good guys and bad guys in the story, but characters like the one who doesn’t always have confidence in themselves, the one who others think is dingbat crazy but are the most heroic, the the quiet character that finds their voice when something important happens they really care about, the person in power who doesn’t like what they are doing but goes along with things to protect a loved one.  I am hoping each reader can connect with a character and find themselves rooting for the main character, Iggy.

With the kind of world we’re living in, I think any fiction that aims to be inclusive is more important than ever. Ignatius and the Swords of Nostaw sounds very much needed.

I have brought along some photos and background on a few of the fantasy creatures from my story. While authors describe the creatures they create in their mind, my wife decided to have an illustrator help readers visualize the creatures and had those illustrations loaded up onto my author website, DAMucci.com. 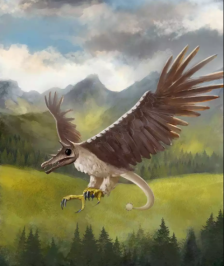 The first creature is a Tipei (pronounced like tip pee)

A Tipei is a Surviving from prehistoric times, the first tipeis came to Matreach from the faraway land of Alkebulan with the fierce Dahomey warrior, Nzinga. The tipeis and Nzinga quelled the corrupt takeover of Matreach by Minister Jetrix. To this day the tipeis remain loyal to a single Matreach master to ensure peace throughout Matreach. 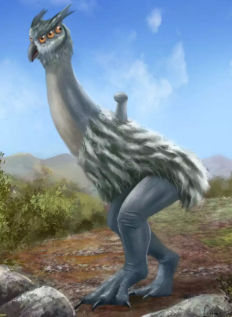 Next is a rockhopper: Rockhoppers are indigenous to Matreach and live symbiotically with the people of this land. With feathers and fur in green and gray tones, these creatures could easily camouflage within the natural landscape. Many rockhoppers are happy to regularly run and glide for human riders in exchange for food and comfortable shelter. 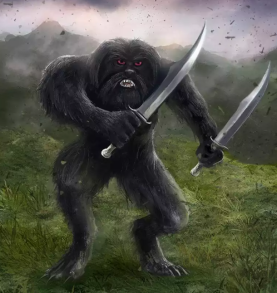 And finally I have brought a Nostaw (short o in first syllable, aw pronounced like “ow”, I hurt myself in second syllable)

Nostaw Warriors make their home in Cambria. They are an isolated race by choice, living by a code of honor that rules every aspect of their life. Males and females are treated the same, without distinction. Their fierceness on the battlefield is legendary. Though they prefer to live in peace they are not hesitant to kill if they or their way of life is threatened. The people of Skye only know of Nostaw from the stories passed on by storytellers and elders.

Wow. Those are impressive creatures and fabulous illustrations.

I came up with the name Nostaw because it is Watson spelled backwards. Watson was our little Shih Tzu dog named Watson. Though small he always thought he was a badass dog and would get up in the face of dogs five times his size. He has since crossed over the rainbow bridge so when I needed a fierce warrior, I decided to fulfil Watsons dreams and make him a badass Warrior, so Watson became Nostaw. Here is a picture of Watson: 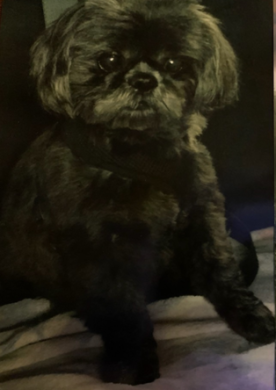 Oh yes! I can see exactly where your Nostaw warrior came from.

Thanks so much for chatting with me about Ignatius and the Swords of Nostaw David. I’m thrilled for you that out of such difficult times you have managed to produce something so creative. Let me give Linda’s Book Bag readers a few more details about the book:

Ignatius and the Swords of Nostaw

The towering stone Castle Maol, the unrivaled seat of power in the Kingdom of Skye, sat inland almost bereft of life.
Once known for its inspirational beauty, Skye’s forests and meadows were more barren than green now, enveloped by stillness instead of bustling wildlife. Lakes and waterways once teeming with marine life lay stagnant. Most of those who lived here survived under gray clouds of despair.
Several of the eldest knew of the prophecy that would return the land to its prior golden age and quietly hoped it was true.
Only a handful knew the secret that would allow the prophecy to come true. They refused to speak of it.

Fifteen-year-old Iggy is good at three things: languages, witty retorts, and running from a fight. When a guy pulls a knife on him during a high school argument, all the banter in the world isn’t enough to save him, so Iggy resorts to his backup plan—running. But before he can make his escape, the locket he always wears around his neck heats up, and someone tackles him from behind, pinning him to the ground.

Iggy’s never thought of himself as a fighter. He’s spent his life running from anything that can’t be solved with a quick one-liner or a snarky comeback. But as he learns more about the strange place he’s landed, one thing becomes abundantly clear: in the World on Skye, they need a hero. And Iggy just might be the one they’re looking for, even if he’s not so sure.

Ignatius and the Swords of Nostaw is available for purchase here.

About D. A. Mucci 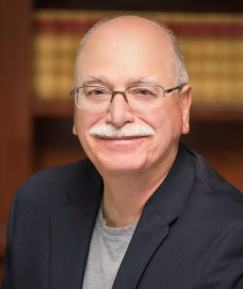 Being an Emergency Room physician for close to forty years, Dr. Mucci found that the pandemic brought forth new horrors in the ER. Writing this fantasy story about Ignatius became an enjoyable escape for him from all that was happening in the real world.

You can find more about D.A. Mucci and Ignatius and The Swords of Nostaw at www.damucci.com or by following David on Instagram and Facebook.