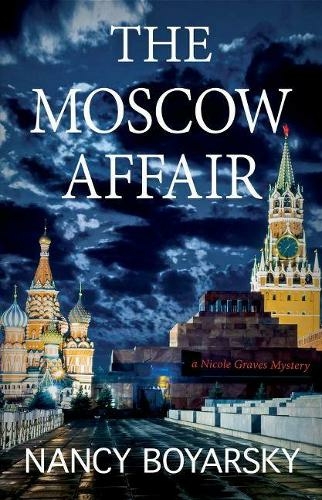 It’s a real pleasure to welcome back Nancy Boyarsky to Linda’s Book Bag as we celebrate her brand new book out today.

Previously Nancy stayed in with me when Liar Liar was published in a post you can see here. I was also privileged to host an extract from Nancy’s book The Entitled and you can read that extract here.

Thanks for having me back Linda.

The Moscow Affair is your latest and sixth P.I. Nicole Graves mystery. Tell us a bit about it.

My new mystery takes you to a tour ship docked in Moscow. You’re set to cruise the Volga from Moscow to Saint Petersburg.

Now that’s something I’ve always wanted to do.

This was a trip I took several years ago, and it was fun to revisit while couped up during the Covid year of 2020. One of my reviewers, Mally Becker, author of The Turncoat’s Widow, described The Moscow Affair like this, “An update of the traditional Cold War spy novel with a determined protagonist and a twisty, fast-paced plot that could be ripped from today’s headlines.”

That sounds brilliant. Tell me a bit more about your trip.

My impressions of the Russian people: dour, unsmiling, unfriendly. Did you know Russians aren’t prompted to smile from an early age like Americans. Think of all the times your mother, aunt, grandma, whatever, said, “Where’s that pretty smile?” or “Why are you looking so sour?” One of our tour guides said she enjoyed working with American tourists, but it took getting used to because “they smile too much.” What a comment that is on Russian culture. They believe that smiling for no good reason is a sign of insincerity. A smile from a stranger can be considered an insult. Hard to believe, but there it is!

I think I’d find that hard. I do a lot of smiling – I have one of those faces that can’t help it! What aspects from your trip have you employed in The Moscow Affair?

I also describe other aspects of Russian culture, including food and fashion that point up the many differences between Russia and the West. I’ve used a larger canvas for this story than in my other mysteries with a conflict of international importance that might lead to war between Russia and Ukraine.

Does that take us away from Nicole then?

The heart of the story is Nicole’s flight from the cruise ship after she witnesses the murder of a fellow passenger. She is hunted by the Moscow police, not a good situation for a foreigner in Russia who can’t speak the language and knows no one. Always resourceful, she enlists the help of the mysterious Olga Marozova. Later, Nicole’s perennially missing fiancé, former MI6 agent Ronald Reinhardt, makes an appearance.

How did you learn so much about Moscow after a single visit?

Right. It was a cruise along the Volga that only gave me three days in Moscow. For research, I turned to the internet, which allowed me to revisit the city and its favorite tourist spots. It gave me a 360 degree view of Red Square. During The Moscow Affair, Russia is preparing for its annual May 6th military parade, which is to take place there.

I think many author have had to be resourceful for research in recent times Nancy.

So, have you brought along anything Russian to share?

To give you a taste of Russia’s food, I’ve brought some of the amazing hamburgers served by a popular fast-food chain in Russia, Black Star Burgers. Of course, hamburgers are thoroughly American, but Moscow’s take on them is yummy. These are served on Russian black bread with tons of cheese, bacon, and a deliciously gooey sauce made with truffle oil. The burgers come with black disposable gloves, because Russians consider eating with their hands unsanitary and uncouth. They may have a point, at least about the sanitation aspect, don’t you think?

To drink, we have your choice of chilled government-issued Putin Vodka (although Putin himself is reputed to be a tee-totaller). Russian style, aka all you can drink. Or you can have tea, which is also very popular there.

It’ll be tea for me Nancy. Vodka is not something I enjoy. And who have you brought along?

I’ve brought the heroine of my book, Nicole, and her sister Stephanie, the perennial screwup. Oddly, Reinhardt isn’t along. I’m wondering what’s happened to him. Has he disappeared again? Please don’t mention this to Nicole. It might spoil the festive mood.

My lips are sealed. I love the sound of The Moscow Affair Nancy. Thanks so much for spending a little bit of publication day with me. If you put the kettle on to make the tea, I’ll give readers a few more details about The Moscow Affair.

In this fast-paced mystery, P.I. Nicole Graves agrees to an unusual, short-term assignment working for MI6 in Russia. It sounds straight-forward, even pleasant: a two-week luxury riverboat cruise on the Volga, observing a group of fellow passengers and filing a daily report on their activities. It’s simple enough, except for one caveat: No matter what these people do, she’s to tell her handler at MI6—no one else, especially not the Russian police. When one of the riverboat passengers winds up dead, Nicole realizes this assignment was anything but straightforward.

Soon, Nicole is immersed in a high-stakes game of murder and espionage where trusting a stranger can be as deadly as a bullet.

Published today, 21st September 2021 by Light Messages, The Moscow Affair is available for purchase through the links here. 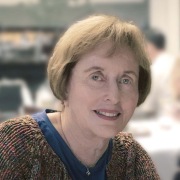 Nancy Boyarsky is the bestselling author of the award-winning Nicole Graves Mysteries, of which The Moscow Affair is the latest in the series. The Entitled was on Apple Books list of most anticipated fall books of 2020. Nancy’s first mystery, The Swap, won a gold medal in the Eric Hoffer Book Awards.

Before turning to mysteries, Nancy coauthored Backroom Politics, a New York Times notable book, with her husband, Bill Boyarsky. She has written several textbooks on the justice system as well as articles for publications including the Los Angeles Times, Forbes, and McCall’s. She also contributed to political anthologies, including In the Running, about women’s political campaigns. In addition to her writing career, she was communications director for political affairs for ARCO.