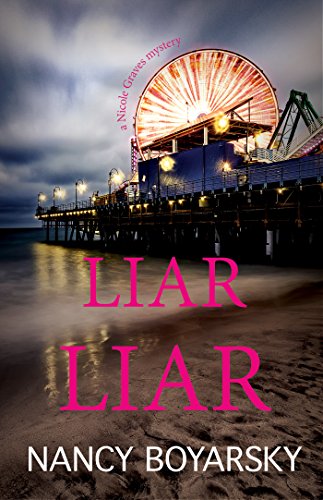 It’s always so good to meet new to me authors and today I’m delighted to welcome writer Nancy Boyarsky to Linda’s Book Bag to tell me all about one of her books.

Staying in with Nancy Boyarsky

I brought my new book, Liar Liar, with me because was published yesterday, and I’m very excited about it.

(I bet! And a Happy Publication Day for yesterday Nancy!)

It was challenging and, in the end, a lot of fun to write because my fearless sleuth, Nicole, shows a new aspect of herself, one she doesn’t like. She becomes an accomplished liar, although not to the extent of the other main players in the book. She struggles with the guilt she feels lying to her fiancé about her continuing involvement in a murder case. Josh, she now realizes, is overly protective in a way that stifles her instinct for righting a terrible injustice. He doesn’t want her anywhere near the murder trial, especially since it’s a high profile story that attracts huge attention from the media and paparazzi.

In my previous mystery, The Bequest, Nicole herself was the target of the tabloids to such an extent that she had to hide out to escape them (as well as a murder threat).

Delving into this story bought up some interesting questions: Do we ever really know the whole truth? Do we each have our version of past events? I enjoyed writing about the push-pull between the truth and lies and how difficult it is for other people to figure out what really happened.

(Oh yes! I’m always fascinated about the way we can construct our own truths. I think I’d really enjoy this series and Liar Liar in particular Nancy.)

What can we expect from an evening in with Liar Liar?

If you love mysteries, you’ll find yourself caught up in a fast-moving, character-driven story that tunes in on today’s headline stories. It begins with a rape accusation that escalates and turns deadly. The plot unfolds with a number of twists and surprises. Basically this is a who-done-it. female-sleuth story; we know fairly early on who didn’t do it. As the plot progresses, it’s clear that many involved are not telling the truth. Even Nicole, finds herself lying when her fiancé objects to her looking into the murder that he feels could put her in danger. I put in several court-room scenes, but kept them short and to the point. You can expect the action to keep going all the way to the end.

Because mysteries are addictive, I’ve brought along a big plate of amazing brownies baked by my friend Charlotte, along with munchies, including roasted mixed nuts, guacamole and chips.

(Now, if you’re going to bring along those kind of snacks, you can come again Nancy!)

I’ve also brought my technical advisors, Cathy Watkins, a P.I. and my brother-in-law Jeff, a criminal defense attorney, because they’re fun to talk to.

(We’d better give them a chance to join in then!)

And finally, I’ve brought a couple of bottles of Pino Grigio, so everyone can relax and have a good time.

It’s been so interesting finding out about Liar Liar, Nancy. Thank you for staying in with me. I’ve really enjoyed our evening. Now, let’s pour Cathy and Jeff a drink…

Nicole Graves finds herself in the crosshairs when she reluctantly agrees to babysit a witness in a high-profile rape trial. Mary Ellen Barnes is suing her university’s star quarterback for rape when the authorities won’t act. In the court of public opinion, Mary Ellen appears to be the quintessential, pious, good girl. But her lies and mysterious comings and goings lead Nicole to suspect that she’s not what she seems.

It isn’t just Mary Ellen who’s acting suspiciously. No one wants to own up to the truth in Liar Liar, not even Nicole, whose fiance; begs her not to look into the case. But when the witness goes missing during the trial, Nicole is caught up in a tangle of lies that turns deadly. After the investigator assigned to the case fails to do his job, Nicole is determined to find the killer on her own, no matter the risks.

Published by Light Messages Publishing, Liar Liar is available for purchase through the links here.

Before turning to mysteries, Nancy coauthored Backroom Politics, a New York Times notable book, with her husband, Bill Boyarsky. She has written several textbooks on the justice system as well as articles for publications including the Los Angeles Times, Forbes, and McCall’s. She also contributed to political anthologies, including In the Running, about women’s political campaigns. In addition to her writing career, she was communications director for political affairs for ARCO.