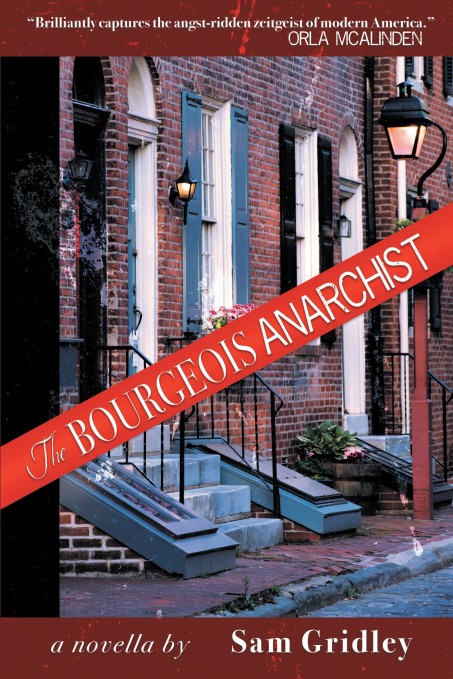 One of the aspects of book blogging I most enjoy is ‘meeting’ authors and books I would not otherwise encounter. Today I am pleased to welcome Sam Gridley to the blog to tell me all about one of his books. Let’s find out more:

Staying in with Sam Gridley

I’m pleased to be here, Linda. Thanks for inviting me.

Thank you for agreeing to stay in with me.

Well, right now the weather outside is terrible. I think we both made an excellent choice.

Argh! The weather is a nightmare these days. Much better to concentrate on books I think! Tell me, which of your books have you brought along to share this evening and why have you chosen it? 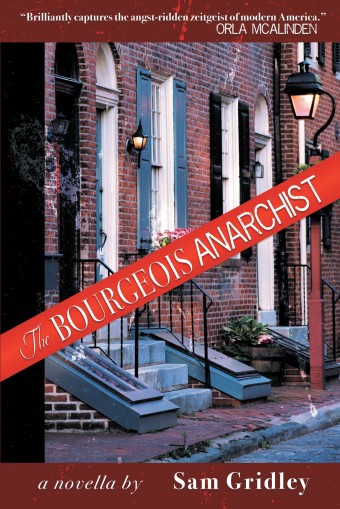 I’ve brought my novella The Bourgeois Anarchist. Of my three published books of fiction, this is the latest and perhaps most relevant to our current cultural debates. It confronts serious issues with, I hope, good humor and respect. One reviewer mentioned the book’s “light touch” and “affection for its characters.”

Actually, I couldn’t help but treat the main character, Susie Alioto, with affection. I’ve been in love with her for years.

Susie and her mathematician son first appeared in a mystery-spoof I wrote some years ago. I thought it was tremendously funny, but apparently not enough other people did, and it was never published. Yet Susie has stayed with me, demanding to come back in a better story.

Oddly, in the years since her first go-round, Susie has stayed exactly the same age, while her son has changed his name and grown eleven years younger.

The wonders of fiction eh?

What can we expect from an evening in with The Bourgeois Anarchist?

You too will fall in love with Susie, I can almost guarantee it. She’s tremendously good-hearted, an idealist, and about ten times as tough as you’d guess from her diminutive size. And yet she gets entangled in a situation that proves almost too much for her.

The plot includes arsonists, mobsters, sleazy cops and life-threatening violence, but the real focus is Susie’s conflicting loyalties and difficult moral choices. She’s long been an anarchist, at least theoretically—she spent two decades in a militant commune—but now her principles leave her floundering in her time of need. You might say the quandary involves her head versus her heart, but her head is on both sides, and her emotions are flipping about like butterflies.

I rather like the sound of Susie. What about her son?

Despite the seriousness of the plot, her son Eric, a classic nerd, should keep you chuckling. Though Eric knows nothing about sports, he can tell you the equations for a prolate spheroid (e.g., a football). And in case you’re inclined to mock Susie’s political idealism as naïve, don’t worry, Eric will do it for you.

I hated show-and-tell in school, but in this case I have something good to present. I’ve brought a poster!

Among historical anarchists, Susie’s favorite is Errico Malatesta (1853–1932), an Italian who spent most of his life in exile. She keeps the poster shown here on her refrigerator so that his most famous saying—“Impossibility never prevented anything from happening”—can be a constant inspiration.

There are various posters of Malatesta, but this one, as I described it in the book, didn’t exist, so I created it myself. I’ve made it freely available with the slogan, “You too can have an anarchist on your refrigerator!”

One other note relating to this once-famous anarchist: Susie’s son’s full name is Eric Malatesta Leffler. When he was nine, Susie dragged him through Italy to retrace Malatesta’s path during an absurdly futile rebellion. Then when Eric was a teen, his friends told him his middle name meant “diseased testicle.” His distaste for his mother’s politics should need no further explanation.

No, I suppose not!

Oh, and something else: A “bourgeois anarchist” is of course a contradiction in terms, or it ought to be. But when a young friend first heard the title, he quipped, “Aren’t they all?”

Now that IS food for thought. Thanks so much for staying in with me to tell me about The Bourgeois Anarchist Sam. It sounds very entertaining. You pop into the kitchen to put your poster on the fridge and I’ll give Linda’s Book Bag readers a few more details.

Susie Alioto is a longtime political militant. After college she spent two decades in an anarchist commune, and at age 66 her beliefs haven’t wavered. She protests with young people to demand justice and human rights. She marches for gun control, for Black Lives Matter, for action against climate change. A portrait of her special anarchist hero, Errico Malatesta, hangs on her refrigerator with an inspirational quote of his: “Impossibility never prevented anything from happening.”

Yet Susie now teaches at an expensive private school, and her life is comfortably middle-class. Her son Eric, a budding mathematician, mocks her as a “bourgeois anarchist.”

As the story opens, violence breaks out at a peaceful rally, and Susie is injured. A young woman dressed in Antifa gear rescues her, and Susie is drawn into a mysterious intrigue involving angry activists and devious capitalists, gentrification, arson, even mobsters. Cops pound on her door to demand information. Though Susie tries to hew to her principles, the true nature of justice becomes muddled, and her anarchist heroes-including the grizzled Malatesta on her refrigerator-provide no clear answer. People’s lives are involved, and she doesn’t know what to do. The dilemma escalates into an existential crisis.

In the midst of this turmoil, Susie stumbles into unexpected romance. But is the new man any more reliable than the ones who’ve failed her in the past? Meanwhile her son, the apolitical math geek, adds an offbeat and comic perspective that may offer a clue to the personal and political intrigues.

Published on 9th July 2021, The Bourgeois Anarchist is available for purchase from Amazon, Barnes and Noble and directly from the publisher, Finishing Line Press.

After being born in Pittsburgh, Sam Gridley lived in Camden, Providence, Bristol, Westchester, Inglewood, Palos Verdes Estates, Torrance, Redondo Beach, Northridge, Culver City, Berkeley, Oakland, Cambridge, Brighton, London, Palo Alto, Bellefonte, Baltimore, Lyndhurst, Rutherford, and perhaps other communities he has forgotten. This was before the age of 29. Since then he has settled in Philadelphia and scarcely budged. As an author, he has published two novels, The Shame of What We Are and The Big Happiness, as well as stories and satire in more than sixty magazines and anthologies. He has received two fellowships from the Pennsylvania Council on the Arts and a Wallace Stegner Fellowship from Stanford University. Married for many years, Sam has two grown children, one neurotic dog and a small backyard where several gerbils are buried.

One thought on “Staying in with Sam Gridley”