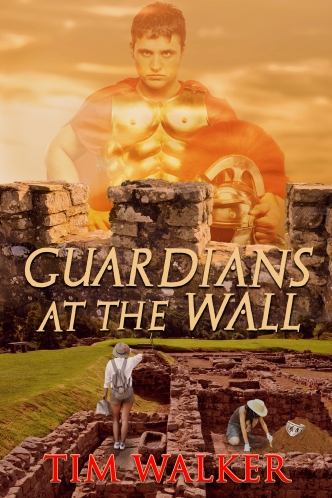 Tim Walker has featured frequently on Linda’s Book Bag; and most recently we stayed in together to chat all about his book, Arthur Rex Brittonum, in a post you can read here.

Tim also introduced PERVERSE – a collection of short prose and verse, sharing a poem with us in a post you can see here.

It was my pleasure to share an extract from Arthur Dux Bellorum here and Tim has introduced his book Uther’s Destiny in a post you can see here, as well as previously writing a fabulous guest post about fiction and fear when the second book in his A Light in the Dark Ages series, Ambrosius: Last of the Romans, was published, and you can read that post here.

Guardians at the Wall

A group of archaeology students in northern England scrape at the soil near Hadrian’s Wall, once a barrier that divided Roman Britannia from wild Caledonian tribes.

Twenty-year-old Noah makes an intriguing find, but hasn’t anticipated becoming the object of desire in a developing love triangle in the isolated academic community at Vindolanda. He is living his best life, but must learn to prioritise in a race against time to solve an astounding ancient riddle, and an artefact theft, as he comes to realise his future career prospects depend on it.

In the same place, 1,800 years earlier, Commander of the Watch, Centurion Gaius Atticianus, hungover and unaware of the bloody conflicts that will soon challenge him, is rattled by the hoot of an owl, a bad omen.

These are the protagonists whose lives brush together in the alternating strands of this dual timeline historical novel, one trying to get himself noticed and the other trying to stay intact as he approaches retirement.

How will the breathless battles fought by a Roman officer influence the fortunes of a twenty-first century archaeology dirt rat? Can naive Noah, distracted by his gaming mates and the attentions of two very different women, work out who to trust?

An extract from Guardians at the Wall

[archaeology student, Noah, visits the Head of Archaeology for her opinion on his find]

I skirted around the two-storey sandstone building and ducked through a doorway into a well-lit reception area and stood before Mavis, the marketing assistant.

“Hi Mavis, is Maggie in?” I chirped, picking up the latest issue of Archaeology Magazine. Professor Maggie Wilde was pictured on the cover, standing on the battlements of the reconstructed section of wall, gazing northwards towards the unconquered barbarians. She was already a celebrity archaeologist and would have made the perfect foil for Harrison Ford’s movie character, Indiana Jones, with her wild, windswept strawberry blonde hair framing a striking face with cute freckles across her nose, and twinkling pale blue eyes. Her glossy lips suggested she knew the value of a warm smile or pout in a room full of men. ‘It’s like fancying your mum’s friend’, Dave had once remarked.

“She’s on a conference call to the States. Wait if you like, she’ll be finished soon,” Mavis replied, in a cultured Edinburgh accent. Posh Scottish.

“She’s the pin-up girl of British archaeology,” I quipped, flashing the magazine cover.

“I don’t know what she uses to keep her skin so flawless,” Mavis sighed.

“Perhaps she discovered an ancient potion?” I offered, flicking through the pages to the article. I had been hovering around when the photographer had taken her photos that day – maybe I was in the background of one of the pictures? I sat and read. ‘Hadrian’s Wall Gives Up Its Secrets’, the headline declared. The Vindolanda reading tablets were described as, ‘the find of the century.’ My broad idea for my dissertation was for it to be based on translations from some of the tablets – those that related to the lives and living conditions of the soldiers garrisoned at Vindolanda and other forts in the early years of Hadrian’s Wall. I had been cropped out of the photos.

“They couldn’t have been more excited if they’d discovered Moses’s tablets,” I quipped.

“You can go in now,” Mavis said, her voice dragging me away from the article. I had read half of it, and resolved to return to it when I came out.

Professor Maggie Wilde’s room was bigger than the reception area, with two walls given over to floor-to-ceiling book shelves – one with books and the other with boxes of academic reports and maps. No doubt Mavis had labelled and sorted them, as Maggie gave the air of being disorganised. She was an anomaly – a successful career academic who reputedly hated being tied down to boring tasks, like report-writing, collating documents, copying and filing; a creative free-thinker who was skilled at persuading others to unburden her of boring or repetitive tasks. She held two positions – Head of Archaeology at the Trust, and part-time Archaeology Professor at Newcastle University.

“Ah, Noah, come in. Just move those over there and sit,” she said, pointing to a couch piled high with maps and printouts. I moved the items and sat, twiddling my thumbs, watching the crown of her ginger head, waiting until she looked up. I had literally bumped into her at the student placement reception a few days earlier, and she had welcomed me with a firm handshake. I had blurted that I’d seen her Hadrian’s Wall documentary on television, feeling like a needy fan as soon as I’d said it. She had smiled and asked me what I hoped to achieve during my placement and listened intently, planting her stylish heels as if she had nowhere else to go, a strange thing in a room where people were mingling in groups. I was grateful for her full attention and pleased when she invited me to call on her expertise any time.

“There never seems to be a good time, so now will do,” she said, removing her reading glasses and fixing me with a warm and welcoming smile. “I’ve just had a two-hour conference call with members of the US Archaeological Society, so I could do with a distraction.” She leaned forward and picked up the marble figure Mike had brought to her hours earlier. He must have thoroughly cleaned and polished it before presenting it to her.

“I just wanted to hear what your thoughts are on that little lady,” I said. “Do you think she’s a female deity?”

She turned it over in her slender fingers and her shoulders twitched. “Ooh, I felt a slight shock, like static on a jumper,” she said, placing it gently on her blotter. “Yes, most likely female, judging by the full-length robe. The slight tummy bump suggests she might be pregnant, so perhaps a fertility symbol. I’ll send it to the curator at the Hancock Museum for her opinion. She’ll give me a better idea of where it fits into the Brigantes’ belief system. Some of their gods were twinned with Roman deities as the polytheistic Romans were keen to encourage local worship in their temples. Once we know roughly how old it is, we can look for other carvings or figures from that period and make a guess as to which deity it is. I agree with Mike; it could be a goddess whom the household would supplicate for good fortune, fertility or protection from evil spirits. Come and sit in the chair.”

[At the same location in the year 180 CE, Roman centurion, Gaius Atticianus returns home after a fractious meeting to be confronted by his wife, Aria]

He entered his courtyard in a state of shock to be met by Aria, legs apart in her combative stance, holding the Brigantia effigy in one hand, a look of anger in her eyes.

“What do you mean by sending Paulinus to give me this carving of the local goddess, Brigantia? You know full well that we have a shrine to the water goddess of my people, Sulis, who is twinned with your goddess Minerva, and is the deity who watches over this house and our family! Have you forgotten the time our prayers and the healing waters of Sulis restored our little Brutus when he had the sweating fever?”

“Sulis be praised. But my love, it was a gift from the wife of my scout whom we saved from despoilment and murder,” Gaius replied in his well-practised conciliatory tone. She had resurrected the unhappy memory of his fears that his little son would succumb to the same fever that had robbed him of his first family.

“Then you have kept your promise and delivered it to me. But it cannot remain here, or our own goddess will desert us. You shall not see it again and do not ask me about it.” Gaius knew not to argue further when her temper was raised. She looked both magnificent and terrifying when her red mane was raised and her crystal eyes turned icy with rage. But like the storms of Britannia, it would soon blow out and she would be his sweet Aria again.

“You are wise, as always, my love,” he whispered, now more eager than ever to soak his weary bones and clear his troubled mind. He would withhold his bad news from her and mull it over. Gaius skirted around her and went to the kitchen to seek out Longinus to make preparations for his bath. He would be up at dawn to prepare once again for battle with the Caledonii, or to lead a guard to Coria with their wives, cohort valuables, and the report blaming him for the attack. But that was tomorrow. Tonight, he would eat with his family and sleep in the arms of his beloved Aria.

Tim Walker is an independent author living near Windsor in the UK. He grew up in Liverpool where he began his working life as a trainee reporter on a local newspaper. After attaining a degree in Communication Studies he moved to London where he worked in the newspaper publishing industry for ten years before relocating to Zambia where, following a period of voluntary work with VSO, he set up his own marketing and publishing business. He returned to the UK in 2009.

His creative writing journey began in earnest in 2013, as a therapeutic activity whilst recovering from cancer treatment. He began writing an historical fiction series, A Light in the Dark Ages, in 2014, inspired by a visit to the part-excavated site of a former Roman town. The series connects the end of Roman Britain to elements of the Arthurian legend and is inspired by historical source material, presenting an imagined history of Britain in the fifth and early sixth centuries.

The last book in the series, Arthur, Rex Brittonum, was published in June 2020. This is a re-imagining of the story of King Arthur and follows on from 2019’s Arthur Dux Bellorum. Both titles are Coffee Pot Book Club recommended reads. The series starts with Abandoned (second edition, 2018); followed by Ambrosius: Last of the Romans (2017); and book three, Uther’s Destiny (2018). Series book covers are designed by Canadian graphic artist, Cathy Walker.