I’m very pleased to welcome Tim Walker, author of Ambrosius: Last of the Romans, to Linda’s Book Bag as I’m fascinated by that era of our history. Tim has kindly agreed to explain a little bit about why he thinks readers like me have that interest.

Ambrosius: Last of the Romans is available for purchase here.

Ambrosius: Last of the Romans

A country shell-shocked by the end of Roman rule lies open to invasion from ruthless barbarians. Cruel tyrant Vortigern has seized control and chosen to employ Saxons in his mercenary army. But who is the master and who the puppet?

Enter Ambrosius Aurelianus, a Roman tribune on a secret mission to Britannia. He is returning to the land where, as a child, he witnessed the murder of his noble father and grew up under the watchful eyes of an adoptive family in the town of Calleva Atrebatum. He is thrown into the politics of the time, as tribal chiefs eye each other with suspicion whilst kept at heel by the high king.

Ambrosius finds that the influence of Rome is fast becoming a distant memory, as Britannia reverts to its Celtic tribal roots. He joins forces with his adoptive brother, Uther Pendragon, and they are guided by their shrewd father, Marcus, as he senses his destiny is to lead the Britons to a more secure future.

Ambrosius: Last of the Romans is an historical fiction novel set in the early Dark Ages, a time of myths and legends that builds to the greatest legend of all – King Arthur and his knights.

Fear of invasion is a primal anxiety, etched on our primitive, tribalistic consciousness. It’s about safeguarding precious resources from predatory ‘others’ – peoples unknown to us around whom a narrative of grotesque and fearsome attributes is spun by the leaders of our tribe to prepare us for war.

Sound familiar? Well it should, as it’s practically the history of human development in a nutshell. This notion of repelling invaders is part of the history of the British people; people who have at one time been the invaders themselves. Our island home has meant invading armies have had to brave the storms of the Channel to land and meet hostile locals – from Julius Caesar to the Normans.

But wedged between these two momentous events was one with more profound and far-reaching consequences. I’m talking about the coming of the Angles, Saxons and Jutes. We’re still talking their language, so deep-rooted was their influence, and they mapped-out the divisions between England, Wales and Scotland. The coming of Germanic tribes to fight as mercenaries for the Romans and then, following their departure, an early Briton high king, known as Vortigern (although this is deemed by some to be a title akin to ‘over-king’), is not seen as an invasion. They were invited in, saw what they liked, and sent for the friends and families.

This coming of waves of settlers – warrior tribes – from what is modern day Denmark and northern Germany, happened over a period of two hundred years, their numbers building to form formidable armies who in time swept away all Briton tribal resistance. They fought each other and developed kingdoms, claiming the land as their own and defending it from other invaders.

Little detail is known, save for the few surviving, and at times contradictory, records of monks such as Nennius, Gildas and Bede, of what actually happened during a three hundred year period up to the reign of King Alfred at the end of the ninth century. By then, Anglo-Saxon King Alfred was facing a whole new set of invaders – the Vikings.

This is the backdrop to my new historical fiction novel, Ambrosius: Last of the Romans. Ambrosius Aurelianus was the son of a murdered noble and possibly Briton’s first high king, Constantine. Tantalising glimpses are offered in the writings of Gildas, Nennius, Bede and Geoffrey of Monmouth, of a high king of the besieged Briton tribes who organised resistance to the westward march of successive waves of Saxon armies. He is the elder brother of Uther Pendragon in one account, who succeeds him and in turn is succeeded by Arthur.

My story is a link between the departure of the Romans from Britannia and the coming of King Arthur, a legendary figure whom devoted archaeologists and historians are still trying to legitimise. It was a time of grim determination to cling onto a crumbling order, whilst faced with a fearsome and ruthless enemy. The Saxon wolf had been invited into the Briton sheep pen, and wool was about to start flying. I’ll leave with this haunting lament from Gildas, written barely one hundred years after these events:

The poor remnants of our nation… that they might not be brought to utter destruction, took arms under the conduct of Ambrosius Aurelianus, a modest man, who of all the Roman nation was then alone in the confusion of this troubled period by chance left alive.

Taken from On the Ruin of Britain (De Excidio Britanniae) by Gildas, c. AD550, translated by J.A. Giles. 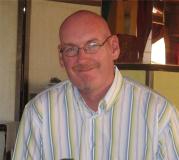 After school, he worked as a trainee reporter, progressing to writing a music column and reviewing films.

He obtained an honours degree in Communication Studies, majoring in film studies, and added a Post-Graduate Diploma in Marketing two years later in Bristol.

After graduating, he worked for ten years in London in the newspaper publishing industry in market research and advertising sales support.

He followed this with two years as a voluntary worker with Voluntary Services Overseas (VSO) in Zambia, working in book publishing development.  Soon after, he set up and managed his own publishing, marketing and management consultancy company.

Tim now lives near Windsor in Berkshire where he blogs and writes creative fiction.

10 thoughts on “Fiction and Fear, A Guest Post by Tim Walker, Author of Ambrosius, Last of the Romans”