I rarely feature dystopian fiction on Linda’s Book Bag so when I heard lovely Leigh Russell had written a brand new dystopian book, Rachel’s Story, I simply had to ask her why she has moved into this genre. Luckily she agreed to provide a smashing guest post that I am delighted to share with you today.

Last time Leigh was on Linda’s Book Bag she stayed in with me to chat about Death Rope in a post you can see here. and it was five years ago that Leigh told me about her road to publication when Journey to Death was published. You’ll find that post here.

Rachel’s Story was published by Bloodhound Books on 6th April 2021 and is available for purchase here. 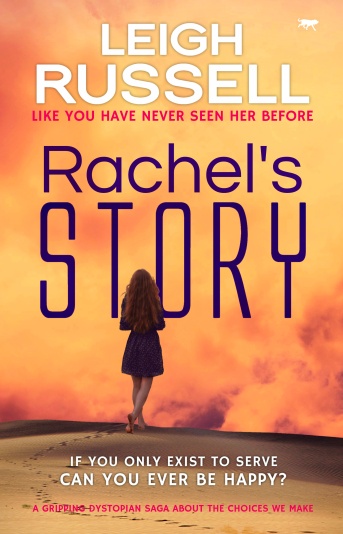 In a world where food is scarce, the government rules and ordinary people only exist to serve, can there ever be happiness? As a child, living in a post-apocalyptic world, Rachel is initiated into The Programme where selected young girls are medicated to make them fertile. Fearing for her future, Rachel escapes. But freedom comes at a price, as she learns when she joins the outcasts struggling to survive beyond the city walls.

Dystopian fiction, perhaps more than any other genre, is a literature of ideas. As we read these novels set in speculative future worlds, we are not only reading about a scenario created in someone else’s imagination. We are being invited to contemplate our own world and the direction in which we could be heading, as individuals, as a society, and as a species.

My own dystopian novel, Rachel’s Story, explores a post apocalyptic scenario that develops in the wake of a pandemic that threatened to destroy all life on earth. It is written in the first person, hopefully helping readers enter an unfamiliar world of a dystopian future, where nothing is quite the same as it is in our lives. The prologue takes the reader into Rachel’s childhood home in a world where food is scarce, the government has absolute power, and strict laws are mercilessly enforced. When her mother is killed, Rachel is initiated into The Programme where selected young girls are medicated to make them fertile. Fearing for her future, she manages to escape. But freedom comes at a price, as she learns when she joins a community of outcasts struggling to survive in the desert beyond the city walls.

The best dystopian fiction writers manage, in Hamlet’s words, “to hold, as ’twere, the mirror up to nature.” The dystopian mirror might display a warped view of our own reality, but it nevertheless reflects something about our own society and our own lives. So Orwell’s 1984 explores political dangers he perceived in the real world in the 1940s, dangers that persist today. In The Chrysalids, John Wyndham speculates about the lives of the survivors of a nuclear holocaust. In a story written in the 1955, just ten years after the bombing of Hiroshima and Nagasaki, Wyndham considers the potential destruction of an atomic world war. Interestingly an early version of the story was entitled ‘Time for a Change’. The threats Orwell and Shute wrote about were very real fears in the 1940s and the 1950s, and they remain very real threats in today’s world.

Bubonic plague ravaged England in the mid seventeenth century and the author Daniel Defoe – creator of Robinson Crusoe – probably had childhood memories of it. From Defoe’s 1722 novel ‘A Journal of the Plague Year’ to ‘World War Z: An Oral History of the Zombie War’, Max Brooks’ 21st century story of man’s battle against a zombie plague, pandemics have inspired dystopian stories. My own dystopian novel explores the possible aftermath of a plague that has affected not only people, but all life on earth.

Some dystopian stories end on a pessimistic note, but this is rare. In his moving novel ‘On the Beach’, Nevil Shute writes the story of the last few human beings left on earth after a nuclear holocaust. His characters carry on with their lives, knowing they will soon be dead as radiation poisoning spreads around the earth, and mankind will soon become extinct. But most dystopian novels end with a sense that if individual characters die, mankind will survive. What all dystopian novels have in common is the resilience of the human spirit as characters struggle to survive against almost unbearable odds. So Rachel’s Story ends with at least a glimmer of hope for the future.

That’s fascinating Leigh. Thank you so much for providing such an interesting post. I think it’s time I added more dystopian fiction into my reading diet!

Leigh Russell has written twenty-four novels, and her Geraldine Steel crime series, published by No Exit Press, has sold over a million copies. In addition to her crime series featuring detective Geraldine Steel, Leigh has written two trilogies and two stand alone psychological thrillers. Rachel’s Story is her first dystopian novel. Leigh chairs the judging panel for the Crime Writers Association’s prestigious Debut Dagger Award, and is a Consultant Fellow for the Royal Literary Fund.