I can’t believe it’s over two years since Leigh Russell was last on Linda’s Book Bag telling us all about the inspiration for her book Journey to Death in a post that you can read here. I knew I had to rectify that gap so when lovely Katherine Sunderland asked me if I’d like to be part of the launch celebrations for Leigh’s latest book Death Rope, of course I said yes!

I’m thrilled that Leigh is staying in with me today to tell me all about Death Rope.

Staying in with Leigh Russell

Welcome back at last to Linda’s Book Bag Leigh. Thank you for agreeing to stay in with me.

Thank you for inviting me to join you here.

As if I didn’t know, tell me, which of your books have you brought along to share this evening and why have you chosen it?

Tonight I’ve brought along a copy of Death Rope, the new Geraldine Steel murder investigation. The reason for my choice it is that it’s only just come out so I’m very excited about it! Death Rope is the eleventh book in the series, but it works fine as a stand alone. So if any of your followers are interested in it but haven’t read the earlier titles in the series, that’s not a problem. And if you are following the series, this book sees Geraldine working closely with her friend and former sergeant, Ian Peterson.

(I can’t believe this is the eleventh Geraldine Steel book. Many, many congratulations Leigh.)

What can we expect from an evening in with Death Rope?

Hopefully you can expect a few shocks, as well as a few plot twists. My editor said, ‘all these years of editing Geraldine Steel and you still never fail to surprise me!’ So even if you’ve read the other ten Geraldine Steel investigations, I really hope you’ll still struggle to predict everything that happens in Death Rope.

(It sounds as if you’ve another cracker of a book here!)

That said, I do my best to make my plots believable, as I hate it when I’m reading and something happens that breaks the illusion. It’s a constant juggling act to both surprise and shock your reader, while still keeping to a plausible narrative.

(I totally agree and I know you do it brilliantly.)

I’ve brought a hamper of goodies. Chocolates, because there’s nothing more enjoyable than curling up on a sofa with a good book and a box of your favourite chocolates. Of course we need Champagne so we can celebrate the publication of my new book, so I’ve brought a few crates along. 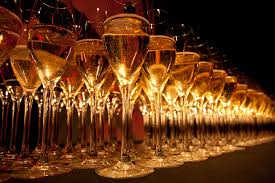 And because we couldn’t possibly eat and drink so much and still be sober enough to read, I’ve invited a few friends to the party here. They’re the team from No Exit Press who helped turn Geraldine Steel’s latest murder investigation into a book. Time to party!

I know some of those No Exit Press folk well so it’s definitely time to party! Thanks so much for coming back to the blog and staying in with me Leigh. Congratulations on Death Rope and here’s to the next 11 Geraldine Steel books!

THEY SAY SUICIDE. SHE SAYS MURDER.

Mark Abbott is dead. His sister refuses to believe it was suicide, but only Detective Sergeant Geraldine Steel will listen.

When other members of Mark’s family disappear, Geraldine’s suspicions are confirmed.

Taking a risk, Geraldine finds herself confronted by an adversary deadlier than any she has faced before… Her boss Ian is close, but will he arrive in time to save her, or is this the end for Geraldine Steel?

Leigh Russell is the author of the internationally bestselling Geraldine Steel series: Cut Short, Road Closed, Dead End, Death Bed, Stop Dead, Fatal Act, Killer Plan, Murder Ring, Deadly Alibi and Class Murder. The series has sold over a million copies worldwide. Cut Short was shortlisted for the Crime Writers Association (CWA) John Creasey New Blood Dagger Award, and Leigh has been longlisted for the CWA Dagger in the Library Award. Her books have been #1 on Amazon Kindle and iTunes with Stop Dead and Murder Ring selected as finalists for The People’s Book Prize. Leigh is chair of the CWA’s Debut Dagger Award judging panel and is a Royal Literary Fellow. Leigh studied at the University of Kent, gaining a Masters degree in English and American Literature. She is married with two daughters and a granddaughter, and lives in London.

One thought on “Discussing Death Rope with Leigh Russell”