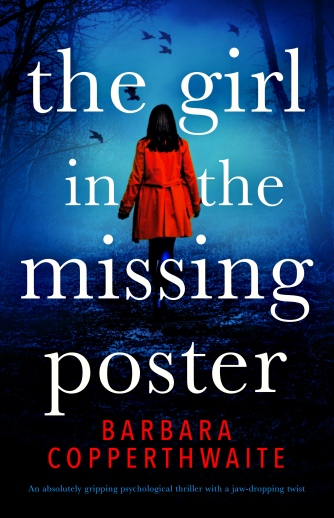 Barbara Copperthwaite is one of the loveliest authors I know and it was a real pleasure last November to help reveal her latest book The Girl in the Missing Poster. It seems a very long time since I last saw Barbara at the Deepings Literary Festival in 2019 and then at one of our author and blogger meetings in Birmingham, but she has featured on the blog in interview here, and again here when Flowers for the Dead had its book birthday. I reviewed Barbara’s The Darkest Lies here and Barbara provided a wonderful letter to herself in a guest post when Her Last Secret was released. You’ll find that letter here.

Today I’m thrilled that Barbara is sharing a guest post with Linda’s Book Bag readers all about the the tragedy behind The Girl in the Missing Poster.

Published by Bookouture on 23rd February 2021, The Girl in the Missing Poster is available for purchase here, and on Apple and Kobo.

The Girl in the Missing Poster

24 June, 1994 – Nineteen-year-old Leila Hawkins runs from her father’s birthday party into the stormy night wearing her sister Stella’s long red coat. Some say she was crying, others swear they saw her get into a passing car. Nobody ever saw her again.

Present – This time every year, on the anniversary of that fateful night, Stella decorates the small seaside town she grew up in with pictures of her beautiful missing sister. But after twenty-five years, is it even worth hoping someone will come forward? Perhaps the upcoming documentary will spark people’s memories by reuniting all the guests who were there the night Leila went missing.

As old friends gather and long-buried secrets begin to surface, the last thing Stella ever expects is a direct response from someone claiming they took Leila. They want private details of Stella’s life in return for answers. But as the true events of the night of the party play out once again, who is lying? And who is next?

I’m always fascinated by book dedications. I find myself wondering who Aunt Bessie was and the influence she had over the author, or who ‘you know who and why’ actually refers to… My latest book is dedicated in part to Julieanne, who has been my best friend since school, and knows where all the metaphorical bodies are buried, but it also reads: For all the missing – and those who are left behind. Why? Let me explain…

The idea for The Girl In The Missing Poster was initially sparked while watching a documentary on the unsolved murder of well-known BBC presenter and journalist Jill Dando. She was killed with a single gunshot on the steps of her London home, and although someone was convicted, he was later acquitted. During the programme, her brother, Nigel, said: ‘I just wish someone could explain to me – or a judge and jury – and tell me why they killed her. It makes no sense to me. It will never make sense to me.’

I tried putting myself in his shoes and started crying at the enormity of it. I rewound the documentary, grabbed a notebook and jotted the line down. I couldn’t help wondering what would happen if the killer were watching – and were moved to get in touch to explain. That was only the beginning though…

On the surface, The Girl In The Missing Poster is about Leila Hawkins, a police cadet who disappeared aged 19, after leaving her dad’s birthday party during a storm. But really at the heart of it lies Stella, the identical twin left behind, who has spent the last 25 years unable to stop searching for answers. She is haunted by endless scenarios – not only her own, but also the countless ones on social media, as people discuss the case and seem almost to forget that they are talking about a person.

For 25 years Stella has wished someone would give her answers. Then one day, her wish comes true – someone claiming to be Leila’s killer contacts her. Can she trust what they say? What does this person truly want? And how much is Stella willing to give up in order to find out the truth?

All the way through writing The Girl In The Missing Poster I was haunted, just like Stella; constantly imagining how I would feel if a member of my own family were to go missing. I began researching Missing Persons cases. Someone goes missing every ninety seconds in the UK. It rarely makes the news.

Imagine not knowing where someone you loved was. Imagine waving goodbye to them – and never knowing what happened to them after that. Every 90 seconds, someone in the UK experiences that.

Personally, I can deal with pretty much any truth, but not knowing… It is something I absolutely can’t handle. It’s probably why I became a journalist, and is also why I now love to explore questions in my fictional books. The thought of so many people going through the hell of constantly wondering and never knowing broke my heart. One of the many stories I came across during my research was that of Renee MacRae, 36, and her three-year-old son, Andrew, who disappeared in 1976. It is Britain’s longest-running missing persons’ inquiry.

The pair were last seen leaving Inverness in November 1976. Renee’s BMW was later spotted by a passing train driver in a remote lay-by on the A9, near Dalmagarry. A rug stained with blood matching Renee’s blood type was found.

Last year, detectives carried out an extensive forensic search of Leanach Quarry, near Culloden Battlefield. About 13 million litres of water was drained from the flooded quarry, and sediment and silt were removed for detailed forensic examination. Still, no trace of Renee or her son were found.

For 44 years her family have had nothing more concrete than their own imaginations to fill in the blanks of what happened to the mother and son.

There’s nothing I can do to help them or the thousands of other people going through this torture. A dedication in my book won’t ease their suffering, but it’s the only thing I can offer. So for them, for all those who have gone missing and may never be found, for those who are trying to find their way back home, and for those who are left at home, waiting, wondering, I dedicate my book. I hope that one day all of them can find peace.

*In the time it’s taken you to read this post, two people have gone missing in the UK.

My word Barbara, that’s powerful stuff. I hope this doesn’t sound ridiculous, but we lost a cat without a trace once and we’ve never stopped wondering what happened to him. For that same thing to happen to a human being must be unbearable. I think The Girl in the Missing Poster is an absolute MUST read. I’m so glad it’s on my TBR.

Barbara is the Amazon, Kobo and USA Today bestselling author of psychological thrillers Invisible, Flowers for the Dead, The Darkest Lies, Her Last Secret and The Perfect Friend. Barbara’s latest book is The Girl in the Missing Poster.

Her writing career started in journalism, writing for national newspapers and magazines. During a career spanning over twenty years Barbara interviewed the real victims of crime – and also those who have carried those crimes out. She is fascinated by creating realistic, complex characters, and taking them apart before the readers’ eyes in order to discover just how much it takes to push a person over a line.

Her first book, Invisible, was ‘totally gripping, and scarily believable’ according to Bella magazine. Its success was followed by Flowers For The Dead, which was the Sunday Mirror’s Choice Read, beating Lee Child’s latest offering. ‘Will have you looking over your shoulder and under your bed… Original, gripping, with a deep psychological impact,’ their review read.

The Darkest Lies came next, published by Bookouture, and became a USA Today bestseller. The follow-up, Her Last Secret, hit the Number 1 spot on Kobo. The Perfect Friend is a No 1 Kobo and Amazon best seller.

When not writing feverishly at her home in Birmingham, Barbara is often found walking her two dogs, Scamp and Buddy, or hiding behind a camera to take wildlife photographs.

10 thoughts on “The Tragedy Behind The Dedication In ‘The Girl In The Missing Poster’: A Guest Post by Author Barbara Copperthwaite”