It’s almost exactly a year since the lovely Sheila O’Flanagan featured on Linda’s Book Bag when we stayed in together here to chat about Her Husband’s Mistake. Today we’re celebrating the paperback publication day for The Women Who Ran Away, a book sitting waiting for me on my TBR. My enormous thanks to Rachel of Rachel’s Random Resources for inviting me to participate today. It has been my pleasure to listen to Sheila speak about her writing on several occasions both virtually and in real life and I’m thrilled to have an extract from The Women Who Ran Away to share with you.

Published in paperback today, 4th March 2021 by Headline, The Women Who Ran Away is available in all the usual places including Amazon UK, Amazon US and Waterstones.

The Women Who Ran Away

THE NO. 1 IRISH BESTSELLER!

‘One of my favourite authors’ Marian Keyes

‘If you’ve had to cancel your holiday plans this summer, don’t worry – this beautiful new novel will transport you to sunnier climes…’ – HEAT‘S READ OF THE WEEK

In Sheila O’Flanagan’s stunning new novel, two women face up to shocking truths about the men they’ve loved – and start to make their own decisions about what to do next…

Deira isn’t the kind of woman to steal a car. Or drive to France alone with no plan. But then, Deira didn’t expect to be single. Or to suddenly realise that the only way she can get the one thing she wants most is to start breaking every rule she lives by.

Grace has been sent on a journey by her late husband, Ken. She doesn’t really want to be on it but she’s following his instructions, as always. She can only hope that the trip will help her to forgive him. And then – finally – she’ll be able to let him go.

Brought together by unexpected circumstances, Grace and Deira find that it’s easier to share secrets with a stranger, especially in the shimmering sunny countryside of Spain and France. But they soon find that there’s no escaping the truth, whether you’re running away from it or racing towards it . . .

WHAT READERS ARE SAYING ABOUT THE WOMEN WHO RAN AWAY:

‘I would have given this 6 stars if I could’

‘Within the first chapter, I had left reality and social distancing behind and joined two amazing women on a life-changing adventure’ *****

‘Couldn’t put this book down!’

An Extract from The Women Who Ran Away

Deira hesitated. ‘It’s not a story like yours. It’s not some- thing you can sympathise with me over.’

Deira took a deep breath, then brought Grace up to speed with how she’d first met Gavin.

‘I felt guilty about Marilyn and the girls, of course,’ she said. ‘Especially Mae and Suzy; I didn’t want them to have a bad relationship with their father and I encouraged him to see them as much as possible, but I was absolutely a hundred per cent convinced that the marriage itself was over and that Gavin and I were forever. I’d never loved anyone the way I loved him.’

‘We were blissfully happy,’ Deira continued. ‘It was a bit awkward initially at work, but eventually that evened itself out. Nobody else was bothered by it and our business relationship evolved over time anyhow. The company’s corporate responsibility strategy expanded and I took control of that; meantime he grew more involved in the pensions side of things. We were specialising in different areas so our work and private lives didn’t clash. We both moved ahead and it was great.’

‘Sometimes I thought that,’ agreed Deira. ‘We bought a mews house near the canal, we spent a lot of time out at functions, we lived a kind of glamour life.’

‘You said before that you bought the house, not both of you,’ Grace reminded her.

‘Well, yes, I took out the mortgage. It would’ve been messy otherwise, especially as it took so long for him to get the divorce. We didn’t want the house to get mixed up in it all. Afterwards, he said it was right that it should be my place. I thought it meant that he was a good person. I loved him.’

‘You were happy,’ said Grace. ‘Why didn’t you marry?’ ‘Mainly because of the girls,’ said Deira. ‘They hated the

idea of their dad marrying again. If it had only been Marilyn, I’d have done it like a shot simply to annoy her. She was so bloody difficult about it all. I know it was hard for her, I do, truly, but she never let up.’

‘You mean she wanted him back?’

‘Actually, no,’ said Deira. ‘I don’t think she did. But she didn’t want to make it easy for him either. She was forever phoning up, complaining about things, asking for more money for either Mae or Suzy – for essentials, she’d say.’

‘But surely the divorce settlement dealt with all that?’ ‘Eventually it did,’ Deira conceded. ‘But prior to it, she was relentless. Even afterwards she kept demanding things, and he wasn’t willing to get into a battle with her because he didn’t want to antagonise the girls.’

‘You said you wanted him to have a good relationship with them. Does he?’

‘On and off,’ replied Deira. ‘They’re certainly in a better place now than they were at the start, but it’s been tough. At first Marilyn wouldn’t let them visit the house, but after a while Gavin managed to persuade her to allow them to come if I wasn’t there. I used to stay with my friend Tillie those times. Sometimes for a few hours, sometimes for a weekend.’

‘That must have been difficult.’

‘I didn’t mind initially, but afterwards I came to resent it,’ said Deira. ‘When I’d get home, I’d find things had been moved around or hidden away. Occasionally they’d have squeezed out the contents of my make-up into tissues that I’d find in the bathroom waste bin. Once they mashed up a brand-new Bobbi Brown palette I’d been silly enough to leave behind. They pulled the heels off a pair of Prada shoes too.’

‘They were angry,’ said Deira. ‘They blamed me. I under- stood.’

‘Didn’t Gavin say anything? Do anything?’

‘I never told him,’ said Deira. ‘I didn’t want them to have a row. I reckoned they’d grow out of it.’

‘Eventually. The visits became less fraught and we got on better, although we never really became close. That’s partly why . . .’ She broke off and closed her eyes.

Grace recognised the signs of someone trying to keep herself under control. She’d had to do it often enough over the last few months, not wanting to burst into tears in front of Aline or Fionn or Regan. She’d had to be strong for them. 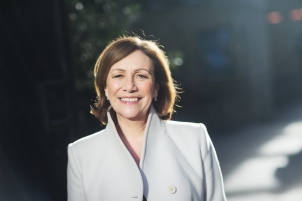 Sheila O’Flanagan is the author of bestselling chart-toppers, including Her Husband’s Mistake, The Hideaway, What Happened That Night, The Missing Wife, My Mother’s Secret and All For You (winner of the Irish Independent Popular Fiction Book of the Year Award). After working in banking and finance for a number of years, Sheila’s love for writing blossomed into curating stories about relationships in all their many forms.