It was a privilege to help reveal the cover for No Love Lost, the sixth book in Robert Crouch’s Kent Fisher Mysteries series back in August because Robert has long been a welcome visitor to Linda’s Book Bag, kindly providing all manner of posts, including a super guest post about daring to be different when the fifth book in his Kent Fisher Mysteries, No Mercy, was published. You can read that post here. Robert featured when No More Lies was released, in a post you can see here. I ‘stayed in’ with Rob in a post you can read here, and he’s been kind enough to provide a guest post (here) shortly after his Fisher’s Fables was released and another here to celebrate No Bodies. Finally, however, I am able to share my review of one of Robert’s books as I have actually read No Love Lost! I’d like to thank Robert for sending me a copy in return for an honest review and for inviting me to participate in these launch celebrations.

No Love Lost was published on 17th September is available for purchase here.

How can a simple job interview end in complete carnage?

When Mandy Paige seeks Kent Fisher’s help to find the mother who abandoned her as a baby, he has no idea of the mayhem his investigation will unleash. With only a photograph of a woman he once knew, he discovers she left her office one Friday afternoon twenty years ago and never returned.

Did Helen Cassidy escape an abusive husband or was she abducted and murdered?

People connected to Helen begin to die in mysterious circumstances. An old foe returns, leaving cryptic messages on the windscreen of Kent’s car. He seems to know Kent’s every move, hounding and taunting the sleuth, attacking those who can help him solve the mystery.

When the main suspect dies, Kent’s investigation lies in tatters – until he realises he’s not the one pursuing the killer. The killer’s pursuing him.

My Review of No Love Lost

Mandy’s arrival in Kent’s life leads to more than he could imagine!

No Love Lost May be the sixth book in the Kent Fisher series but not having read the others did not diminish my extreme pleasure in this one and it works perfectly as a stand alone narrative. I do think I would have appreciated the subtleties of some of Kent’s relationships more had I read the other books in the series but actually that has simply had the effect of making me determined to catch up with the series from the beginning.

Robert Crouch has a smooth writing style that makes No Love Lost effortless to read, allowing the reader to immerse themselves in the action. And what action there is! The book opens in dramatic fashion and maintains a cracking pace throughout, never missing a beat. I loved the endings of each chapter as they often surprised me, were always gripping and meant I simply had to read on. There’s a smashing visual quality to the narrative too so that natural images and descriptions enhance the impact of the action. I could envisage the scenes very vividly. No Love Lost would translate brilliantly to the small screen.

I found the themes of No Love Lost all too pertinent to today’s society. The concept of commitment, fidelity and trust underpins the fast paced action and with side issues such as local government restructuring, the use of technology and the drama of revenge all swirling through the writing, not only does the book entertain wonderfully, it provides relatable food for thought.

What I thoroughly enjoyed too was the lack of expletives in the language and the ability to create drama and tension without the use of extreme gore to convey the drama. Instead, I found myself falling for Kent Fisher as a person, seeing the real man and finding him plausible and human. I rather hope he’ll find some sustained happiness in the next book. I must confess, however, that Columbo was probably my favourite character because he provides light relief in amongst the tension.

No Love Lost is an absolute cracker of a book that deserves a wide audience. I found it hugely exciting, cleverly plotted and very entertaining. I’m sure that had No Love Lost been written by a famous author, film and television companies would be falling over themselves to turn it into a screen production. Robert Crouch’s writing is excellent and I can’t recommend it highly enough.

Robert Crouch is the author of the Kent Fisher murder mystery series. Set in today’s world, the books pay homage to the traditional murder mystery and classic whodunit.

Based on his career as an environmental health officer, Kent Fisher is a different kind of detective, described as ‘unique in crime fiction’ by one reviewer.

Having left environmental health, Robert now writes full time from his home on the East Sussex coast. He loves walking on the South Downs with his wife, Carol, and their Westie, Harvey, reading crime fiction and photography. 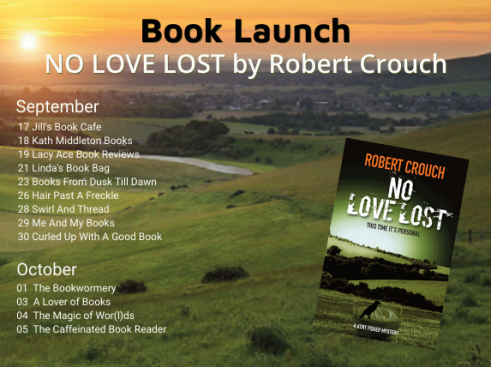 One thought on “No Love Lost by Robert Crouch”