There are some book covers that I absolutely love the moment I see them and Taryn Leigh’s The Secret Letters is absolutely gorgeous. I’m delighted to help reveal it here on Linda’s Book Bag today.

The Secret Letters will be published by Kingsley Publishers on 9th August 2020 in both e-book and paperback. The Secret Letters is available for pre-order on Amazon and all online bookstores, as well as from the Taryn Leigh directly.

Let’s find out more about the book:

Rachel, saved from an attack twelve years before by a faceless stranger, never got to thank him, never knew his name.

Despite the devastation she chose to rise above it to help others from their pain by becoming a psychologist… Her only issue now is that she’s an expert at fixing everyone else’s problems, and blind to her own.

After a long relationship with her boyfriend Will starts to go south, she turns to her best friend Amelia for guidance.

Suddenly her world is turned upside down when tragedy strikes and she’s left with no one to comfort her but Will’s rude older brother Ruari.

Paralyzed by fear, she struggles to take grip of her life, until the day when anonymous letters begin to appear from the stranger who saved her twelve years before. 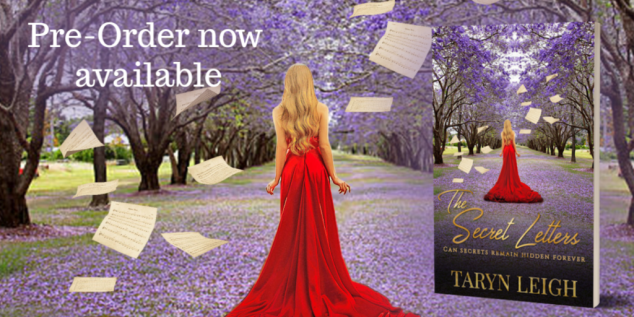 Doesn’t that sound good? Taryn explains a bit more about how the book came about:

The idea for this story, came about one afternoon, when Alshandra Visagie visited our home and shared her harrowing account of being attacked in her home by a stranger.

The way she told that story shook me to the core. Having known of her story my entire life, it was completely different sitting in the room and having a first-hand account of it. Her bravery and courage together with her story of survival was hair raising to say the least, but completely inspirational.

I knew then, that I needed to somehow share her story with the world.

Being a fiction author, I contemplated for months how to tell that story. Whether to tell it like she had, or whether to completely fictionalise it. Eventually, I came to the realisation that I would use this book as an avenue to present the topic of a woman overcoming this horrendous attack, through a work of fiction, and then have her share it with my readers in her own words in live chats. So if you have read this book, look out for those chats on social media, and if you are wondering which part is applicable to her story, it’s found in my own fictitious account in Chapter Fifteen.

And now, of course, I need to read The Secret Letters as soon as I can!

Taryn Leigh is a South African Author, who spent her childhood with her nose buried in books. Her love for reading transpired into her ambition to become an Author.

Taryn Leigh’s first book, Perfect Imperfections, is available in Paperback, eBook and AudioBook. She lives in Pretoria with her husband and son.

3 thoughts on “Cover Reveal: The Secret Letters by Taryn Leigh”