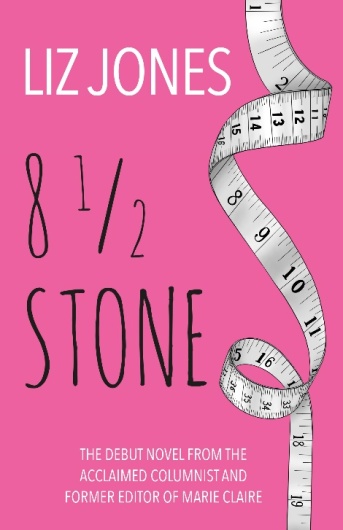 When Martina Ticic from Midas PR got in touch to see if I’d like to be part of the launch celebrations for 8 1/ Stone by Liz Jones, I jumped at the chance and I would like to thank Martina for inviting me to participate. I am thrilled to have an extract from 8 1/2 Stone to share with you today.

Published by Matthew James, 8 1/2 Stone is available for purchase here.

When I reach eight and a half stone:

An Extract from 8/2 Stone

Because that is what always happens after a diet. You relapse. You inflate like a hovercraft. You revert to type. You find your natural level, like Lake Victoria.

Which is why I am considering plastic surgery – after a great deal of thought and having made a list of pros and cons. Pros: I will be able to wear normal clothes, my husband might want sex with me, I might not die of a heart attack. Cons: the expense, time off work, might die. Leaps forward in technology and medical discoveries must be good for something, surely. I am thinking liposuction, and a tummy tuck to excise the strange little flap of skin that is a legacy from post-twin diet number 252. (My friend Izzy made me go to Chewton Glen in the New Forest – don’t worry, it had just been refurbed – for a week, where I was on a juice-only regimen with added boot camp and wrapped in wet bandages in a bid to rearrange my organs and reduce my equator, after a particularly invasive colonic where the therapist kept finding peas: ‘Mattar paneer,’ I told her. ‘I’m married to an Indian.’) Anyway, this skin flap is currently covering my pudenda in a generous curtain, much like the one at the Royal Opera House, only not made of red velvet. I haven’t told a soul yet that I’m considering going under The Knife, but I’m secretly browsing websites and imagining how great my new life will be.

Even on my 30th birthday night, when we returned from the sandwich bar at precisely 8.29 p.m., after my disastrous at-home spa and once Neps had lowered his eyes after raising them long enough to give me Harvey’s Bristol Cream liqueurs in a bid to give me either liver cancer or type 2 diabetes so he can at last bury me in an extra-large grave and remarry a stick insect, I had opened my own rather ancient and heavy laptop (like mother, like daughter) and started browsing websites depicting smiling supermodels who obviously never needed to go under a knife in the first place, but were still standing there, in a red, high-cut swimsuit, boobs thrust out, back curved, one knee forward, hand on non-existent hip. This could be my birthday gift to myself, to kick off a brand-new decade: major invasive surgery and anaesthetic that might just finish me off. Browsing these sites, being taken in by the promises, is exactly the same as being addicted to Rightmove.co.uk, except instead of searching for a new house, I am looking for the perfect new body to move into: downsizing, if you will. My life will be happy, once I have a utility room, a marble wet room, an eat-in kitchen and a stomach that doesn’t resemble a pair of obese buttocks. My mission, should I choose to accept it? To get down to my dream weight, a number I have not owned since I was seven.

To be eight and a half stone.

Liz Jones has millions of readers across the world and was shortlisted five times in the last six years as Columnist of the Year at the British Press Awards and Columnist of the Year 2012 at the BSME awards. Liz Jones, former editor-in-chief of Marie Claire — where she ran a high profile campaign to ban skinny models — fashion editor at the Daily Mail and now columnist at the Mail on Sunday, grew up in Essex, and suffered from eating disorders from the age of 11 until her late thirties.