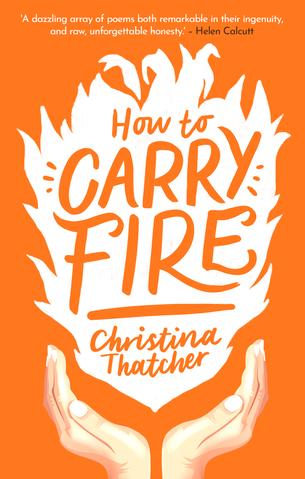 Published by Parthian Books on 2nd April 2020, How to Carry Fire is available for purchase here.

How to Carry Fire

How to Carry Fire was born from the ashes of family addiction.

Beginning with the burning down of her childhood home, Thatcher explores how fire can both destroy and cleanse.

Underneath and among the flames runs the American and Welsh landscapes – locations which, like fire itself, offer up experiences which mesmerise, burn and purify.

This poignant second collection reminds us of how the most dangerous and volatile fires can forge us – even long after the flames have died down.

A Guest Post by Christina Thatcher, Author of How to Carry Fire

When I was 21 my father burnt down our family home. It was an accident but he never recovered from the guilt. This loss of our house – as well as our cherished objects, photographs and land – acted, in a way, like a culmination of all our losses. My father and brother had been losing their war with addiction for years. Many deaths and heartaches had led to this. The fire felt like the height of our hardship but also like an omen of more destructive things to come.

My second poetry collection, How to Carry Fire, explores these many losses. The writing process was sparked by a workshop I attended in 2017 called ‘The Poem as Witness: War and its Aftermath’. Just one month before, a fire had consumed the Grenfell Tower block in London killing over 70 people. The workshop facilitator asked us to read a transcript from one of the survivors and then played a recording of them, in shock, talking about the trapped residents in the tower. The whole room was silent. Then, we were asked to dig deep and consider what we had survived, what our families had survived, what our communities had survived. Immediately, I felt compelled to write about the fire which had followed me and my family for years. In that workshop, I wrote and read out the first shaky draft of ‘Insurance Report’, the poem which now opens my collection.

In the months and years after, I could not stop thinking and writing about fire. At first, it was physical: the literal flames and wreckage of the house. But, soon, the fire I was writing became emotional: the vein of addiction which runs through my parents and brother, my uncle and cousins. It became the anxiety that I carry about all my loved ones dying. Still, even as I wrote into the darkness, I could not shake the idea that the fire which devastated my family had also released us – how losing everything gave my mother permission to flee her abusive relationship, how it led me to search for a new life abroad.

Soon it became clear that fire was symbolic of both loss and love and that the burning of one home could lead to the building of another. Fire came to represent heartening things too, burning bright in pieces about passion and love. I didn’t expect to write so many poems on this theme but the flames just kept growing. And now this collection has emerged full of a kind of hope that I may never have discovered without the language of fire.

Thank you so much for this wonderful piece Christina. I think How to Carry Fire sounds utterly wonderful and I wish you every success with it.

Christina Thatcher won the Black Lion Poetry Competition in 2019, was a winner in the Terry Hetherington Award for Young Writers in 2016 and was shortlisted for the Bare Fiction Debut Poetry Collection Competition in 2015. Her first collection, More than you were, was published by Parthian Books in 2017 and was named a Poetry School Book of the Year. Her poetry and short stories have featured in over fifty publications including The London Magazine, Planet Magazine, And Other Poems, Acumen and The Interpreter’s House. She lives in Cardiff and works as a Creative Writing Lecturer at Cardiff Metropolitan University.