I was delighted to ‘stay in’ with Imogen Matthews last year to celebrate her book The Hidden Village. You can read that blog post here. Today, I’m equally pleased to welcome Imogen back to Linda’s Book Bag with a guest post all about writing a sequel as Hidden in the Shadows is released.

Hidden in the Shadows is available for purchase here.

Hidden in the Shadows 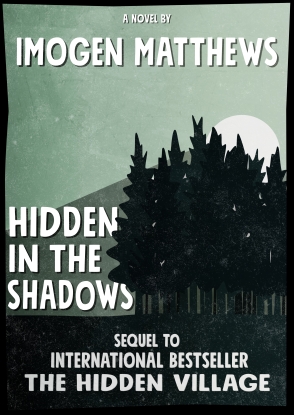 Escape from the hidden village is just the beginning

September 1944: The hidden village is in ruins. Stormed by the Nazis. Several are dead and dozens flee for their lives.

Instead of leading survivors to safety, Wouter panics and abandons Laura, the love of his life. He has no choice but to keep running from the enemy who want to hunt him down.

Laura must also stay hidden as she is Jewish. Moving from one safe house to another, she is concealed in attics and cellars. The threat of discovery is always close at hand.

On the run with no end in sight, the two young people despair of ever seeing each other again.

As cold sweeps in signaling the start of the Hunger Winter, time is running out.

Where can Laura be? Will they ever be reunited?

Hidden in the Shadows is an unforgettable story of bravery and love, inspired by historical events.

I was completely taken by surprise by the massive response to my novel, The Hidden Village, when it was published more two years ago. Within weeks, it was riding high in the Amazon book charts and I started receiving emails and reviews from people across the world who thanked me for bringing this little known story from World War 2 Holland to light. Some asked if there was to be a sequel as they wanted to know what happened to certain characters they’d loved once they’d finished the book.

At the time, I hadn’t thought about writing a sequel, as I’d invested so much of myself in The Hidden Village that I didn’t think there was anything left to say. But of course, no story ever really has an ending and there are always characters the reader is keen know more about. So with the help of my readers’ comments, I found a new narrative emerging and soon became obsessed with the stories of characters who’d played a secondary role in the original book.

I thought long and hard about what would happen to Wouter, the young Dutch man in hiding rather than work for the Nazis, and Laura, the young Jewish girl who has no choice but to go into hiding. The reader of The Hidden Village never discovers whether their tentative relationship that begins when both arrive at the secret woodland village ever comes to anything. As the author, it was my chance to find out for myself and before long I was invested in their heartbreaking journey: not even I knew how it would end!

So this is where the sequel begins after the end of The Hidden Village. It has the pace of a thriller and never relents. Yet it is also a love story between two young people who are brutally torn apart and must find a way to be together against all odds.

Naturally, I was conscious that readers of Hidden in the Shadows may not have read The Hidden Village. I don’t think it’s a good idea for an author to spell out the plot of an earlier book in order to satisfy new readers, but it is important to ensure that when previous characters are introduced that reference is made to the part they played in the first book. Perhaps I made things harder for myself by switching the focus away from key characters who had shaped the narrative first time around, but, rest assured, some, if not all, put in an appearance in Hidden in the Shadows, some to devastating effects!

In short, I’ve written Hidden in the Shadows as a sequel to The Hidden Village, but people can read it who haven’t read the original story.

So what’s next? At the beginning of this year, Liesbeth, my publisher (@AmsterdamPB) asked me this very question. I told her I was researching another story I’d come across on my visits to Holland (I’m half Dutch and visit frequently). This next one takes place in a Dutch concentration camp that hardly anyone outside Holland has heard of and is a story of bravery and courage in the face of unfathomable evil.

I’ve become passionate about these untold stories from WW2 Holland, a country where so many ordinary people were caught up in the most harrowing of situations.

Next year is 75 years since the liberation of Holland by the allies and many who lived through those times are no longer with us. It’s high time that their stories are told.

Oh yes Imogen. I couldn’t agree more. Thanks so much for introducing Hidden in the Shadows. I think both books sound fantastic.

Imogen Matthews is English and lives in the beautiful University town of Oxford. Before she wrote The Hidden Village, she published two romantic fiction e-novels under her pen name, Alex Johnson. The Hidden Village is published by Amsterdam Publishers, based in the Netherlands.

Imogen has strong connections with the Netherlands. Born in Rijswijk to a Dutch mother and English father, the family moved to England when Imogen was very young.

Every year since 1990, Imogen has been on family holidays to Nunspeet on the edge of the Veluwe woods.

It was here that she discovered the story of the hidden village, and together with her mother’s vivid stories of life in WW2 Holland, she was inspired to write her novel.