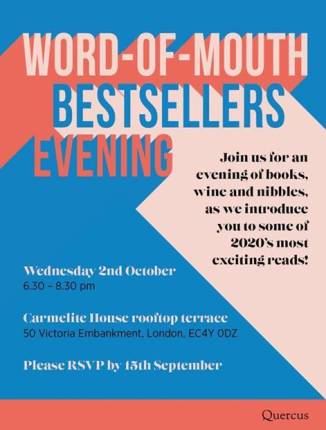 There’s a real pleasure in opening up an email and seeing an invitation from one of your favourite publishers to a bookish evening. My enormous thanks to Katya Ellis at Quercus for inviting me to their latest Word-of-Mouth Bestsellers Evening last Wednesday. I’d like to apologise too for the tardiness of this blog post but a U3A garden group meeting on Thursday morning followed by a Deepings Literary Festival 2021 planning meeting in the afternoon and a theatre visit in the evening with a funeral on Friday didn’t afford me much time! 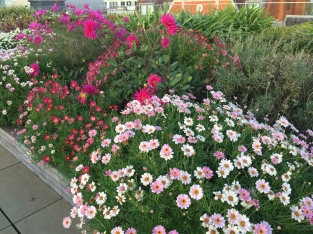 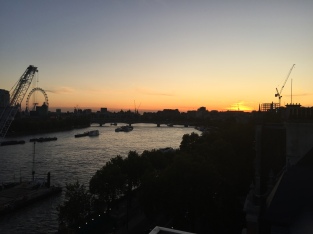 As ever with Quercus book events, there were fabulous displays, drinks and nibbles, as well as wonderful views over London from the beautiful rooftop with an encouragement to be interactive too! 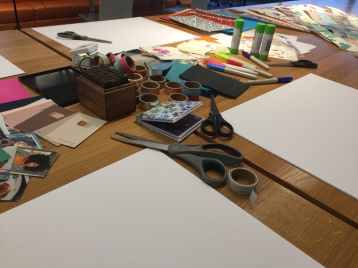 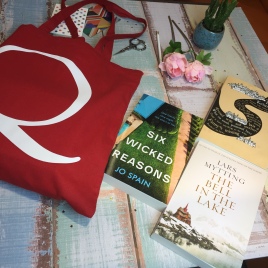 I was excited that the evening would see Candice Brathwaite as the star guest. Candice is the founder of the Make Motherhood Diverse initiative and author of the forthcoming book I Am Not Your Baby Mother, an insightful guide to navigating black British motherhood, and it was a delight to meet her and hear her speak so passionately about I Am Not Your Baby Mother. I came away with a sampler of this book which will be published on 28th May 2020 and let me tell you, Candice Brathwaite doesn’t mince her words! 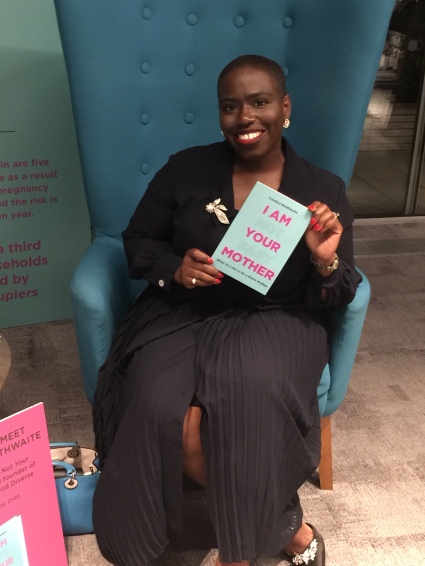 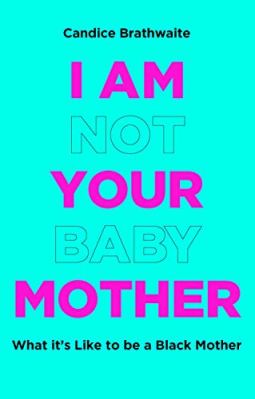 It’s about time we made motherhood more diverse…

When Candice fell pregnant and stepped into the motherhood playing field, she found her experience bore little resemblance to the glossy magazine photos of women in horizontal stripe tops and the pinned discussions on mumsnet about what pushchair to buy. Leafing through the piles of prenatal paraphernalia, she found herself wondering: “Where are all the black mothers?”.

Candice started blogging about motherhood in 2016 after making the simple but powerful observation that the way motherhood is portrayed in the British media is wholly unrepresentative of our society at large.

The result is this thought-provoking, urgent and inspirational guide to life as a black mother. It explores the various stages in between pregnancy and waving your child off at the gates of primary school, while facing hurdles such as white privilege, racial micro-aggression and unconscious bias at every point. Candice does so with her trademark sense of humour and refreshing straight-talking, and the result is a call-to-arms that will allow mums like her to take control, scrapping the parenting rulebook to mother their own way.

You can find out more about Candice by visiting her website or finding her on Youtube and Instagram, or following her onTwitter @CandiceAboderin. I Am Not Your Baby Mother is available for pre-order here. 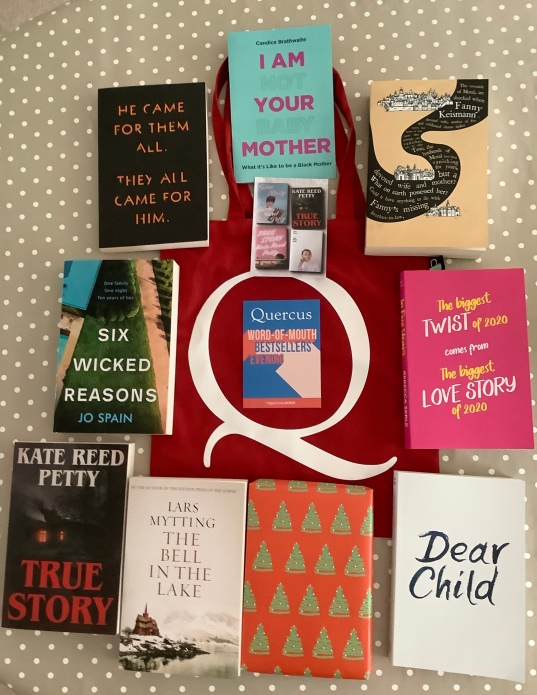 Alongside I Am Not Your Baby Mother I was thrilled to see some of the other books coming next year from Quercus. What I found so impressive was the passion with which they were spoken about by the publicists. The ones that have made it onto my TBR from this wonderful event include: 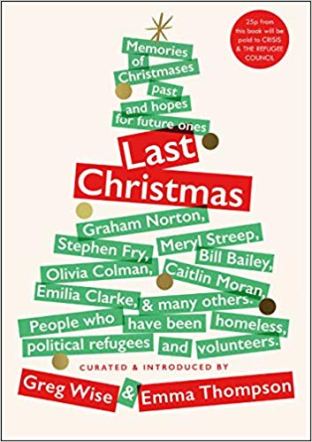 When you think back to Christmases past, what (if anything) made it magical? Looking towards the future, what would your perfect Christmas be? What would you change? What should we all change?

This is a beautiful, funny and soulful collection of personal essays about the meaning of Christmas, written by a unique plethora of voices from the boulevards of Hollywood to the soup kitchens of Covent Garden.

Away from the John Lewis advert, the high street decorations and the candied orange in Heston Blumenthal’s Christmas pudding, this gem of a book introduced and curated by Emma Thompson and Greg Wise celebrates the importance of kindness and generosity, acceptance and tolerance – and shows us that these values are not just for Christmas.

Last Christmas will be published on 31st October and is available for pre-order here. 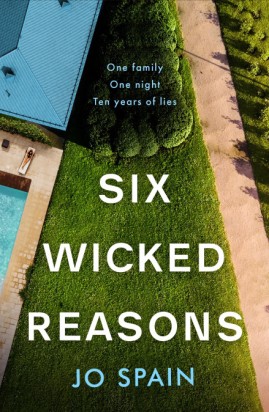 Ten years later, with his mother deceased and siblings scattered across the globe, Adam turns up unannounced at the family home. His siblings return reluctantly to Spanish Cove, but Adam’s reappearance poses more questions than answers. The past is a tangled web of deceit.

And, as tension builds, it’s apparent somebody has planned murderous revenge for the events of ten years ago. 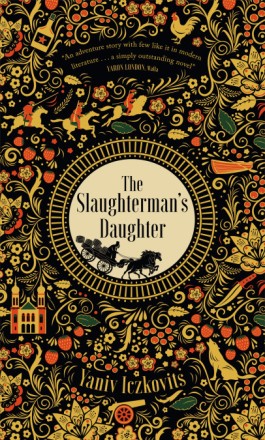 The townsfolk of Motal, an isolated, godforsaken town in the Pale of Settlement, are shocked when Fanny Keismann – devoted wife, mother of five, and celebrated cheese-maker – leaves her home at two hours past midnight and vanishes into the night.

True, the husbands of Motal have been vanishing for years, but a wife and mother? Whoever heard of such a thing. What on earth possessed her?

Could it have anything to do with Fanny’s missing brother-in-law, who left her sister almost a year ago and ran away to Minsk, abandoning his family to destitution and despair?

Or could Fanny have been lured away by Zizek Breshov, the mysterious ferryman on the Yaselda river, who, in a strange twist of events, seems to have disappeared on the same night?

Surely there can be no link between Fanny and the peculiar roadside murder on the way to Telekhany, which has left Colonel Piotr Novak, head of the Russian secret police, scratching his head. Surely a crime like that could have nothing to do with Fanny Keismann, however the people of Motal might mutter about her reputation as a wilde chayeh, a wild animal . . .

Out on 20th February 2020 from imprint MacLehose, The Slaughterman’s Daughter is available for pre-order here.

Three by D. A. Mishani 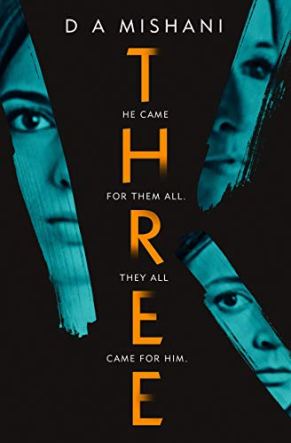 Three tells the stories of three women: Orna, a divorced single-mother looking for a new relationship; Emilia, a Latvian immigrant on a spiritual search; and Ella, married and mother of three, returning to University to write her thesis. All of them will meet the same man. His name is Gil. He won’t tell them the whole truth about himself – but they don’t tell him everything either.

Out from imprint Riverrun on 30th April 2020, Three is available for pre-order here.

In Five Years by Rebecca Serle 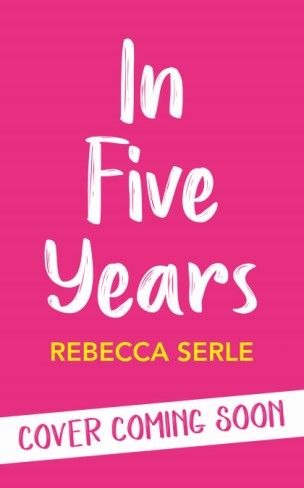 Perfect for fans of Me Before You and One Day, this heart-breaking story of love, loss and life will have you questioning everything you thought you knew about destiny…

Where do you see yourself in five years?

Type-A Manhattan lawyer Dannie Kohan has been in possession of her meticulously crafted answer since she understood the question. On the day that she nails the most important job interview of her career and gets engaged to the perfect man, she’s well on her way to fulfilling her life goals.
That night Dannie falls asleep only to wake up in a different apartment with a different ring on her finger, and in the company of a very different man. The TV is on in the background, and she can just make out the date. It’s the same night – December 15th – but 2025, five years in the future.
It was just a dream, she tells herself when she wakes, but it felt so real… Determined to ignore the odd experience, she files it away in the back of her mind.
That is, until four and a half years later, when Dannie turns down a street and there, standing on the corner, is the man from her dream…

In Five Years is a love story, brimming with joy and heartbreak. But it is definitely not the love story you’re expecting.

Out on 3rd March 2020, In Five Years is available for pre-order here.

The Bell in the Lake by Lars Mytting 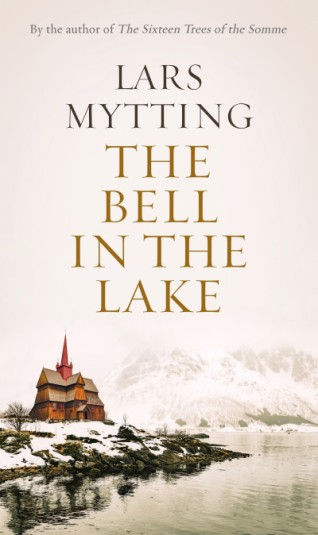 The first in a rich historical trilogy that draws on legend, by the author of Norwegian Wood and The Sixteen Trees of the Somme.

Norway, 1880. In the secluded village of Butangen at the end of the valley, headstrong Astrid dreams of a life beyond marriage, hard work and children. And then Pastor Kai Schweigaard comes into her life, taking over the 700-year-old stave church with its carvings of pagan deities. The two church bells were forged by her forefather in the sixteenth century, in memory of conjoined sisters Halfrid and Gunhild Hekne, and are said to have supernatural powers. But now the pastor wants to tear it down, to replace it with a modern, larger church. Though Astrid is drawn to him, this may be a provocation too far.

Talented architecture student Gerhard Schönauer arrives from Dresden to oversee the removal of the church and its reconstruction in the German city. Everything about elegant Schönauer is so different, so cosmopolitan. Astrid must make a choice: for her homeland and the pastor, or for a daunting and uncertain future in Germany.

The Bell in the Lake will be published by MacLehose on 19th March 2020 and is available for pre-order here. 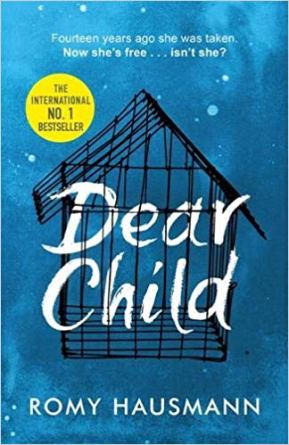 A windowless shack in the woods. Lena’s life and that of her two children follows the rules set by their captor, the father: Meals, bathroom visits, study time are strictly scheduled and meticulously observed. He protects his family from the dangers lurking in the outside world and makes sure that his children will always have a mother to look after them.

One day Lena manages to flee – but the nightmare continues. It seems as if her tormentor wants to get back what belongs to him. And then there is the question whether she really is the woman called ‘Lena’, who disappeared without a trace 14 years ago. The police and Lena’s family are all desperately trying to piece together a puzzle which doesn’t quite seem to fit.

Dear Child will be published on 14th May 2020 and is available for pre-order here. 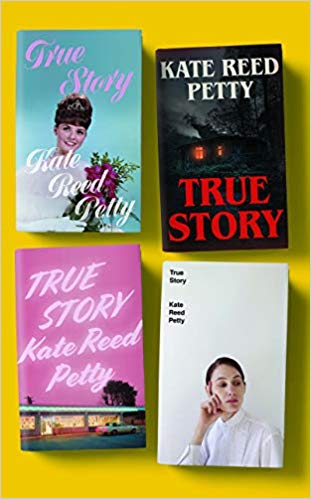 Inventive, electrifying and daring, True Story is a novel like nothing you’ve ever read before.

After a college party, two boys drive a girl home: drunk and passed out in the back seat. Rumours spread about what they did to her, but later they’ll tell the police a different version of events. Alice will never remember what truly happened. Her fracture runs deep, hidden beneath cleverness and wry humour. Nick – a sensitive, misguided boy who stood by – will never forget.

That’s just the beginning of this extraordinary journey into memory, fear and self-portrayal. Through university applications, a terrifying abusive relationship, a fateful reckoning with addiction and a final mind-bending twist, Alice and Nick will take on different roles to each other – some real, some invented – until finally, brought face to face once again, the secret of that night is revealed.

Startlingly relevant and enthralling in its brilliance, True Story is by turns a campus novel, psychological thriller, horror story and crime noir, each narrative frame stripping away the fictions we tell about women, men and the very nature of truth. It introduces Kate Reed Petty as a provocative new voice in contemporary fiction.

Out on 11th June from Riverrun, True Story is available for pre-order here.

I have a feeling that 2020 is going to be a magnificent year for Quercus and its imprints. These books look amazing. Look out for reviews of them all on Linda’s Book Bag nearer to their publication dates!

Once again, I’d like to say a huge than you to all involved in making Quercus’ Word-of-Mouth Bestsellers Evening so enjoyable and exciting. I think I’m going to enjoy every one of these books. I wonder which appeal most to Linda’s book Bag readers?

14 thoughts on “Word of Mouth Best Sellers Evening with @QuercusBooks”