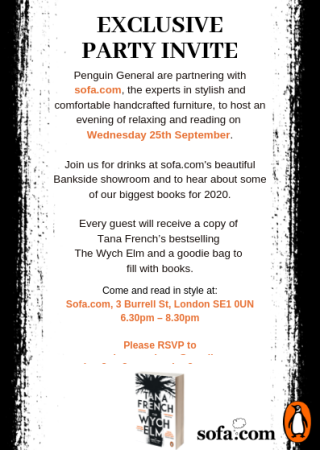 It’s a real privilege being a book blogger as I get to attend some wonderful events, meet authors, publishers and fellow bloggers and read the most amazing books that I can share here on Linda’s Book Bag. 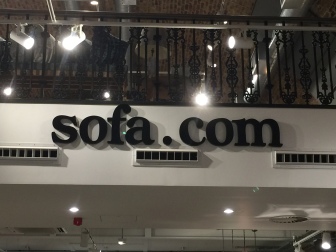 Last evening I was delighted to attend a brilliant event celebrating Penguin‘s books for 2020 which was held in Sofa.com‘s lovely Bankside showroom in London. My enormous thanks to Georgia Taylor for inviting me. 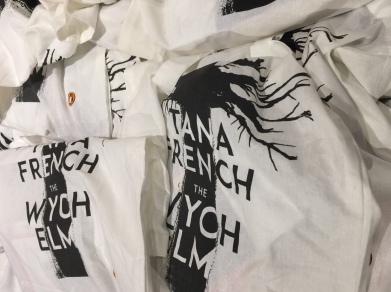 I was delighted to return home with a copy of Tana French’s The Wych Elm in a special goody bag as this book has been in my sights for a while! 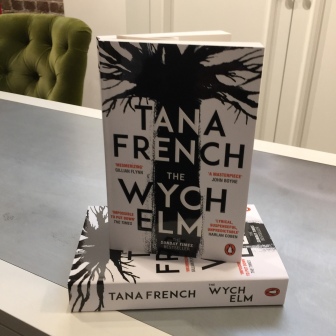 The Wych Elm was published by Penguin in paperback on 5th September and is available for purchase in all formats through the links here. 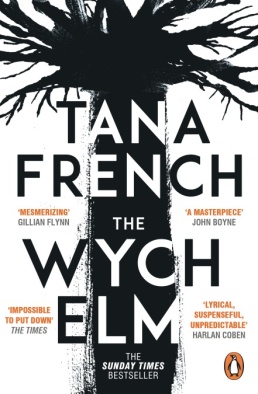 WHAT DO WE HIDE INSIDE OURSELVES?

One night changes everything for Toby. He’s always led a charmed life – until a brutal attack leaves him damaged and traumatised, unsure even of the person he used to be. He seeks refuge at his family’s ancestral home, the Ivy House, filled with memories of wild-strawberry summers and teenage parties with his cousins.

But not long after Toby’s arrival, a discovery is made: a skull, tucked neatly inside the old wych elm in the garden.

As detectives begin to close in, Toby is forced to examine everything he thought he knew about his family, his past, and himself.

A spellbinding book from a novelist who takes crime writing and turns it inside out, The Wych Elmasks what we become, and what we’re capable of, if we no longer know who we are. 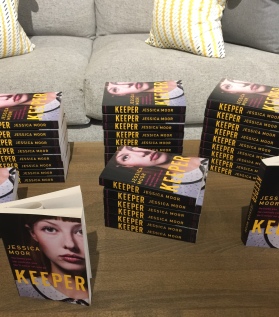 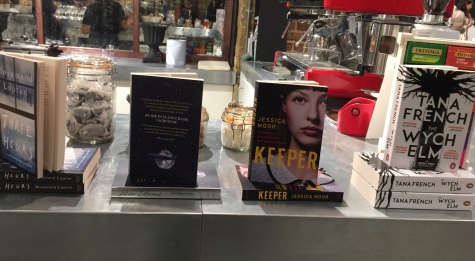 Other novels were placed around the room so that bloggers could add copies to their goody bags and the lovely Penguin publicists told us a bit about recent and forthcoming 2020 releases, brimming with enthusiasm for the books. We were treated to wine and nibbles as we lounged on the glorious furniture, chatting all things bookish. 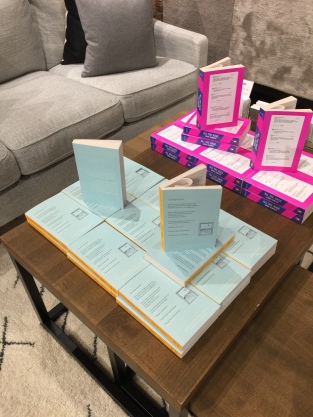 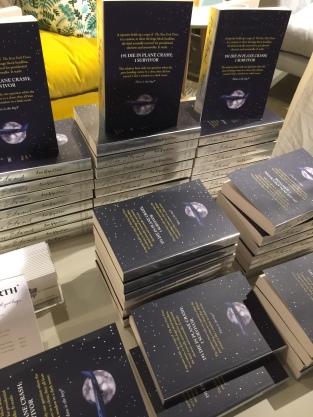 As well as Tana French’s The Wych Elm I was thrilled to receive copies of the following books: 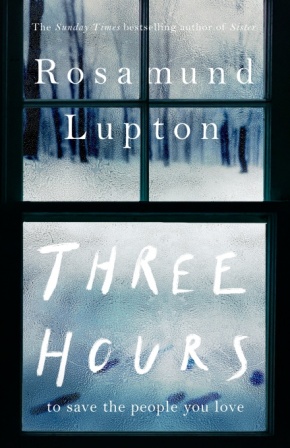 It is a morning’s lessons, a dress rehearsal of Macbeth, a snowy trek through the woods.

It is an eternity waiting for news. Or a countdown to something terrible.

It is 180 minutes to discover who you will die for and what men will kill for.

In rural Somerset in the middle of a blizzard, the unthinkable happens: a school is under siege. Told from the point of view of the people at the heart of it, from the wounded headmaster in the library, unable to help his trapped pupils and staff, to teenage Hannah in love for the first time, to the parents gathering desperate for news, to the 16 year old Syrian refugee trying to rescue his little brother, to the police psychologist who must identify the gunmen, to the students taking refuge in the school theatre, all experience the most intense hours of their lives, where evil and terror are met by courage, love and redemption.

Published on 9th January 202 Three Hours is available for pre-order through the links here.

All the Rage by Cara Hunter 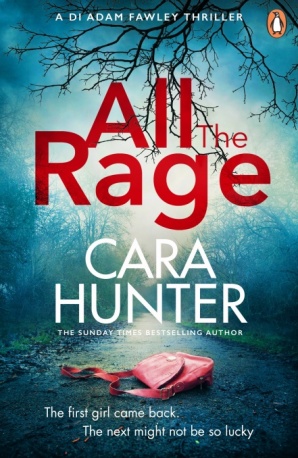 History doesn’t repeat itself. Does it?

A distressed teenage girl is found on the outskirts of Oxford. The story she tells is terrifying: grabbed off the street, a plastic bag forced over her head, then driven somewhere remote and subjected to an assault.

DI Adam Fawley is doing the best he can to investigate, but the teenager refuses to press charges. All he can do is try to ignore the sickening feeling he’s seen something like this before…

But when another girl goes missing, Fawley knows his time is running out.

Because if he ignores the past any longer, this girl may not be coming back.

Out on 23rd January 2020, All the Rage is available for pre-order here. 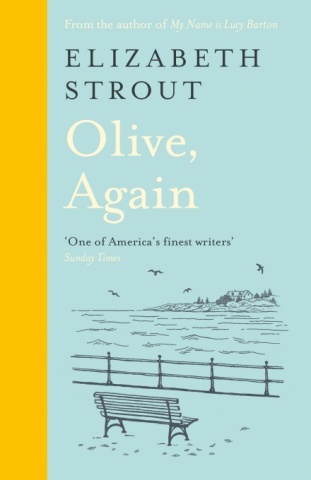 Olive, Again follows the blunt, contradictory yet deeply loveable Olive Kitteridge as she grows older, navigating the second half of her life as she comes to terms with the changes – sometimes welcome, sometimes not – in her own existence and in those around her.

Olive adjusts to her new life with her second husband, challenges her estranged son and his family to accept him, experiences loss and loneliness, witnesses the triumphs and heartbreaks of her friends and neighbours in the small coastal town of Crosby, Maine – and, finally, opens herself to new lessons about life.

You can get your hands on Olive, Again on 31st October through the pre-order links here. 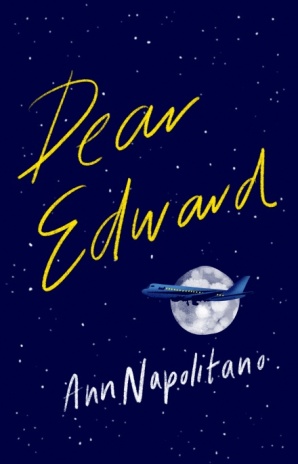 One summer morning, a flight takes off from New York to Los Angeles. There are 216 passengers aboard: among them a young woman taking a pregnancy test in the airplane toilet; a Wall Street millionaire flirting with the air hostess; an injured soldier returning from Afghanistan; and two beleaguered parents moving across the country with their adolescent sons, bickering over who gets the window seat. When the plane suddenly crashes in a field in Colorado, the younger of these boys, 12-year-old Edward Adler, is the sole survivor.

Dear Edward depicts Edward’s life in the crash’s aftermath as he struggles to make sense of the meaning of his survival, the strangeness of his sudden fame, and find his place in the world without his family. In his new home with his aunt and uncle, the only solace comes from his friendship with the girl next door, Shay. Together Edward and Shay make a startling discovery: hidden in his uncle’s garage are sacks of letters from the relatives of the other passengers, addressed to Edward.

As Edward comes of age against the backdrop of sudden tragedy, he must confront some of life’s most profound questions: how do we make the most of the time we are given? And what does it mean not just to survive, but to truly live?

Dear Edward will be published on 27th February 2020 and is available for pre-order here. 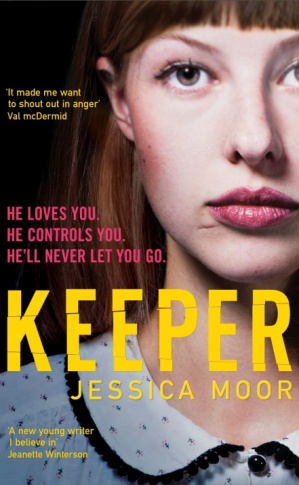 He’s been looking in the windows again. Messing with cameras. Leaving notes.
Supposed to be a refuge. But death got inside.

When Katie Straw’s body is pulled from the waters of the local suicide spot, the police decide it’s an open-and-shut case. A standard-issue female suicide.

But the residents of Widringham women’s refuge where Katie worked don’t agree. They say it’s murder.

Will you listen to them?

Published on 19th March 2020, Keeper is available for pre-order here.

Now doesn’t that sound like a brilliant selection from Penguin coming up? I can’t wait to read them all.

I also came away with a couple of treats in my goody bag but there are no photos of them as I ate the sweets on the train home. The other was a PF 79 kiwi sheet face mask but I think an image of me wearing that might just be too much information. I suggest you stick with the books!

My enormous thanks to all the Penguin team for making me so welcome, for being so enthusiastic about the books and for a lovely evening. Happy reading!

9 thoughts on “New Releases from @PenguinUKBooks”