When a surprise copy of Postscript by Cecelia Ahern arrived from the lovely folk at Harper Collins, I was completely thrilled. I read Cecelia Ahern’s P.S. I Love You when it was published in 2012 and even though I’ve read literally hundreds of books since I have never forgotten it. Receiving the follow up Postscript was an absolute joy and I would like to express my thanks to Liz Dawson and the team for sending me a copy.

You might like to read my review of Cecelia Ahern’s collection of short stories, Roar, here too.

It’s been seven years since Holly Kennedy’s husband died – six since she read his final letter, urging Holly to find the courage to forge a new life.

She’s proud of all the ways in which she has grown and evolved. But when a group inspired by Gerry’s letters, calling themselves the PS, I Love You Club, approaches Holly asking for help, she finds herself drawn back into a world that she worked so hard to leave behind.

Reluctantly, Holly begins a relationship with the club, even as their friendship threatens to destroy the peace she believes she has achieved. As each of these people calls upon Holly to help them leave something meaningful behind for their loved ones, Holly will embark on a remarkable journey – one that will challenge her to ask whether embracing the future means betraying the past, and what it means to love someone forever…

My Review of Postscript

I am utterly broken by Postscript. I have cried until my head throbs and my eyes are red reading this book. Cecelia Ahern has entirely undone me through the intensity of her writing because she has articulated so sensitively, so thoroughly magnificently, and with such humanity, how it feels to have loved someone unequivocally and lost them to a terminal illness. Her depiction of grief, of living with the proximity of death, of friendship, family and relationships pulsates with reality and truth. At the same time, she has created a positive and life enhancing narrative in Postscript that has left me feeling optimistic and somehow soothed.

Although Postscript is a follow up to P.S. I Love You, there is absolutely no need to have read that book to be enthralled by this one. Cecelia Ahern is such a skilled writer that she weaves Holly’s backstory into the narrative in a fluid and organic manner that works beautifully. Holly’s relationship with her deceased husband Gerry, her new life and her possible future are all perfectly balanced and explained. I found Cecelia Ahern’s writing thoroughly enchanting. The plot is glorious and heartbreaking in equal measure so that it is impossible not to feel Holly’s reactions and emotions as she feels them. I love the way the author crafts her writing. She understands the realism needed in direct speech and ensures descriptive sentences are poetic at times and stark and affecting at others so that it is akin to being on a roller coaster of emotion reading Postscript.

Holly is an incredibly realistic character. I didn’t feel as if I were reading about her, but more that I was reading about me through her. I genuinely felt an almost visceral connection as she struggled to be true to the self she had become in the seven years since her husband’s death. Of the others, Ginika was the person who gained my empathy most profoundly. Her feisty nature, despite her youth and educational background, made me want to hold her, support her and simultaneously made me glad to be alive.

Perhaps readers who have not felt the grief I have felt in recent times will have less of a reaction to Postscript, but I adored every word. I devoured the book over twenty-four hours because it felt like a bereavement to be away from it. It’s going to take me a while to recover from reading Cecelia Ahern’s Postscript and if I’m honest, I’m not sure I will get over the intense emotion I felt as I read.  I experienced deep grief and enormous uplifting optimism reading Postscript and cannot recommend it highly enough. What an amazing book and what a fabulous writer! 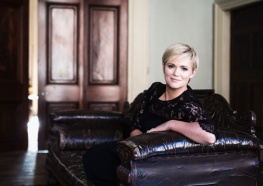 Cecelia Ahern is one of the biggest selling authors to emerge in the past fifteen years. Her novels have been translated into thirty languages and have sold more than twenty-five million copies in over forty countries. Two of her books have been adapted as major films and she has created several TV series in the US and Germany.  She and her books have won numerous awards, including the Irish Book Award for Popular Fiction for The Year I Met You in 2014. PS I Love You was awarded two Platinum Awards at the 2018 Specsavers Bestsellers Awards, for UK and Ireland.

Cecelia lives in Dublin with her family.

14 thoughts on “Postscript by Cecelia Ahern”