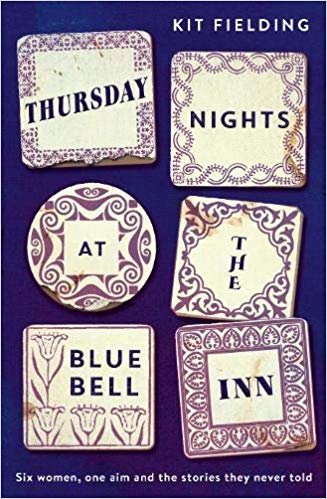 My enormous thanks to the lovely ladies at Team Bookends for sending me a copy of Thursday Nights at the Bluebell Inn in return for an honest review.

Thursday Nights at the Bluebell Inn will be published by Hodder imprint, Coronet, on 8th August 2019 and is available for pre-order here.

Thursday Nights at the Bluebell Inn

Six women, one aim and the stories they never told.

Each week, six women of different ages and from varying backgrounds come together at The Bluebell Inn. They form an unlikely and occasionally triumphant, ladies darts team, but it is there hidden stories of love and loss that in the end binds them.

There is the Irish widow with a heartbreaking secret; the young daughter of a gypsy family experiencing love for the first time; a cat woman alone with her memories who must return to the place of her birth before it’s all too late. Their unspoken stories are ones of heartache, dull marriages, abusive relationships, lost loves and secret hopes.

These displaced women know little of each other’s lives, but their weekly meetings at their local pub weave a delicate and sustaining connection between them all, a constant that maybe they can rely on as the crossroads in their individual lives threaten to overwhelm.

Raw, funny and devastating, all of life can be found at the Bluebell.

My Review of Thursday Nights at the Bluebell Inn

Six women meet at The Bluebell Inn every Thursday to play in a darts league.

When I picked up Thursday Nights at the Bluebell Inn I confess I thought I was about to read a perfectly readable chicklit novel written by a woman. I had no concept that the author was male and that Thursday Nights at the Bluebell Inn would be a moving, intimate and wonderful portrait of six very different, yet simultaneously very similar, women.

I’m not a great lover of multiple viewpoints or of narratives that have several timescales, but in Thursday Nights at the Bluebell Inn they are exquisite and completely magical. I was utterly captivated by every word. This is such a wonderfully written book because each individual first person narrative is distinct and affecting.

Every single one of the women is clearly and sympathetically drawn, even when she is flawed and behaving badly. I felt less that I was reading about them, and more that I was sitting in The Bluebell Inn on a Thursday night eavesdropping their conversations and their inner most thoughts. I loved each and every one of them and now I’ve finished the book I miss them.

Kit Fielding has woven so many believable strands into Thursday Nights at the Bluebell Inn that there truly is something for every reader. There’s death, love, political activism, abuse, passion, and above all an overwhelming sense of living, depicted here so that I hated being away from the book. It called to me so compellingly that my life went on hold until I had devoured every word. There is fabulous humour balanced so poignantly with deep feeling that Thursday Nights at the Bluebell Inn vibrates with raw and vivid emotion and life.

Far from being the perfectly pleasant chick lit I thought I was about to read, Thursday Nights at the Bluebell Inn is a novel that completely transcended my expectations. I found it funny. I found it emotional. I thought it was wonderful.

Kit Fielding was born to a large family in the late forties. His father took agricultural work to provide for them all and they moved often, in part due to Kit’s mother who found it difficult to settle for any length of time, a legacy from her traveller roots. Kit left school at 15 to help earn money for the family. He took on various labouring jobs. He’s now happily married, but still struggles with restlessness; he lives in a caravan somewhere by the sea.