As they have such smashing books for children, Maverick Books are becoming a regular feature here on Linda’s Book Bag.

Previous Maverick publications from the blog include:

The Pop Puffin by Jill Atkins, illustrated by Kelly Breemer and King Carl and the Wish by Clare Helen Welsh and illustrated by Marina Pessarrodona, both reviewed here.

Not Yet A Yeti by Lou Treleaven and illustrated by Tony Neal reviewed here! 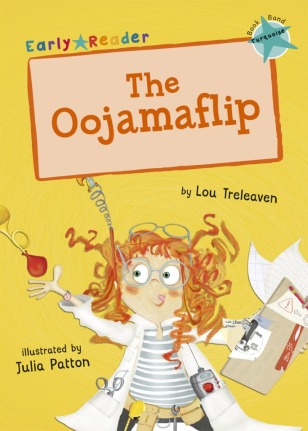 Professor McQuark is has a huge brain.

Her favourite thing to do is to invent.

But with the Science Fair coming up, will her new invention, the Oojamaflip, wow the judges?

My Review of The Oojamaflip

The Ojamaflip is another super children’s book from Lou Treleaven.

Professor McQuark’s name suits her obsession with inventing and science perfectly. I love the positive role model that a female inventor gives to children, alongside Professor McQuark’s immediate ability to bang, clang, saw and sand in her shed to create the oojamaflip. I also think the sense of fair play that she is awarded a prize, even though her invention won’t fit into the exhibition hall, shows children that risks and creativity can lead to success.

Julia Patton’s illustrations match the text perfectly giving plenty of interest to young readers and opportunity for discussion. However, it is in the text where The Oojamaflip is so important. Lou Treleaven has the ability to use rhyme, repetition and word play in such a natural manner that children can learn new vocabulary and experiment with their own language almost without realising they are doing so. The questions at the end of the text help reinforce meaning and understanding too.

The Oojamaflip is another winner from Lou Treleaven. 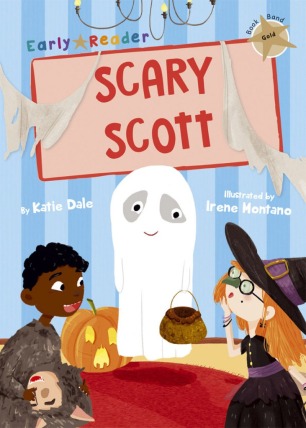 All Scott wants is a friend but being a ghost makes that a whole lot harder.

When Halloween comes around, will Scott finally find some spooky friends?

My Review of Scary Scott

What a lovely story from Katie Dale. Scott is so lonely and in need of friends that I’m certain there will be children reading this story who can relate to his predicament and who will gain courage and self-worth from knowing others experience the same emotions. The message that bullies are also scared when others stand up to them is important too. The themes in Scary Scott could be used as a stimulus for so much discussion with children and their parents and teachers.

I thought the division of Scary Scott into five chapters was perfect for emergent readers because they can have a sense of achievement in reading a complete chapter without being confronted by a whole book. There’s an excellent balance of text to picture and more sophisticated linguistic devices, such as parentheses, exclamation marks and ellipsis, model well the kind of choices children can make in their own writing. There’s also a good balance of vocabulary so that children can consolidate their reading.

I thought the illustrations were fabulous because the children in the story are depicted as mixed gender and race, giving equal status to all. I also loved the room Scott enters being a library as this helps remind children about reading even when they are just looking at the illustrations.

Scary Scott is a book filled with educational potential as well as being the kind of story children love, filled with vampires, ghosts and Halloween mayhem. I really recommend it. 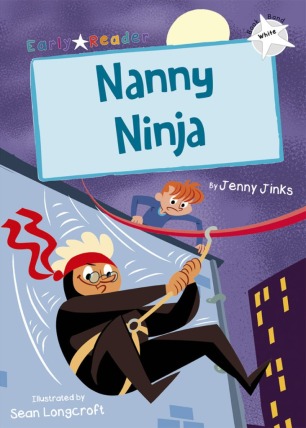 When a strange noise wakes Ant in the night, he hopes to catch a glimpse of the mysterious Ninja, a local crime-fighting hero.

What he doesn’t expect to see his Nanny climbing out the window… dressed as the Ninja!

My Review of Nanny Ninja

Before my review proper I’m just going to get a word of caution out of the way. There are some dangerous activities in Nanny Ninja and adults need to ensure children understand that they mustn’t emulate And and Nanny.

Having said that, Nanny Ninja is a cracking story for children. It’s hugely exciting and packed with action that will appeal to all readers, even the most reluctant. Divided into well defined chapters with smashing cliff hangers there’s a real sense of drama and excitement. As well as encouraging reading, this illustrates for children good writing skills too

Ant thinks his Nanny is boring because she’s always asleep but when he realises why, he views her completely differently. The relationship between the two is a positive example of how we shouldn’t judge others before we know all the facts about them. I liked the concept that there is no mention of a Dad in the story too as so many families no longer have the conventional make up and many children will find this reassuring. I also thought the concept that effort and attempts lead to success was well depicted in a manner that children can apply in their own lives.

The language and style in Nanny Ninja is perfectly attuned to the intended audience. There’s a great balance of direct speech and narrative which is a concept some young writers struggle to achieve, so that they have an excellent model here. There’s a fabulous structure to the chapters and judicial use of adjectives and I think Nanny Ninja exemplifies perfectly the kind of writing we’d like children to achieve even as it entertains them brilliantly.

I liked the illustrations that support the text in Nanny Ninja because they are of a more mature style for this White Band book, again befitting the target readers.

I really enjoyed Nanny Ninja and actually think it would make a really great television series for children too!

All the above mentioned books are available for purchase through the Maverick website.