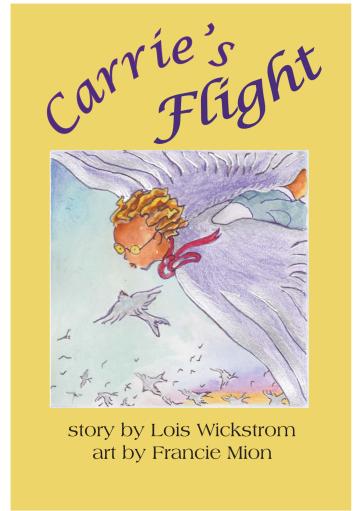 I so enjoy reading books for younger readers so I would like to extend my grateful thanks to Lois Wickstrom for sending me a copy of the children’s book Carrie’s Flight in return for an honest review.

Magic runs in the women of Carrie’s family. Her grandmother, her father’s mother, was the last magical member of the family.

Now, because of her love for Grandma, Carrie is developing her magic and learning to use the wondrous treasures that have been passed down through her family.

In this book, she learns to fly with the starlings in order to visit her grandma at her new home.

This series has three other books, each exploring one of the gifts. The wandas are female wands. The fascinator is a magical hat. The dowsing rods truly search out value.

Most of all Carrie has family as her top priority. The magic works to strengthen her connection to her grandmother.

My Review of Carrie’s Flight

Carrie misses her Grandma but they can still have adventures.

I must begin this review by saying how wonderful Francie Mion’s illustrations are in Carrie’s Flight. They enhance the story beautifully and are true works of art in their own right.

Carrie’s Flight is a lovely modern take on the traditional Icarus story (but without the disaster that befell Icarus!) and I can’t think of anyone who hasn’t wondered what it might be like to be able to fly at some point so that this story appeals to readers of all ages, not just children.

I thought the relationship between Carrie and her Grandma worked very well. As Grandma has had to move into other accommodation, it prepares children for the concept of being separated from those they love through a non-threatening example, especially as Carrie and Grandma are still able to speak via Carrie’s computer. I liked too the way in which Grandma guides Carrie.

The language of Carrie’s Flight is extremely clever because not only does Lois Wickstrom select vocabulary that will enhance the language skills of children, she presents new words very visually so that their meaning is enhanced and easier to grasp. For example, ‘swooped’ is presented on the page in a downward swooping manner. The onomatopoeia of the starlings’ calls, the clear dialogue between Carrie and Grandma and the use of ellipsis add to the pace and excitement in the story too.

I thought the balance between ordinary life such as trawling through old boxes and the magical events of being able to fly and communicate with the starlings was perfectly attuned.

At the end of the story is a fascinating explanation about starlings and their introduction into north America that I found really interesting and informative.

Carrie’s Flight is a charming children’s book that I think can be enjoyed on many levels.

As well as writing, Lois Wickstrom enjoys walk her dogs with her husband when they pick up trash around the neighborhood. She lives many miles away from her children and grand children, so  doesn’t see them very often.

Lois has an organic garden, and a make-shift greenhouse in the basement for starting seeds. She lives in the inner city, so there’s no place to park a car. She rides her bike everywhere that’s practical and belongs to a car co-op.

Lois takes art classes at the local community college, and yoga classes to reduce the pains of an aging body.