My enormous thanks to Caolinn Douglas at Little Brown for inviting me to be part of the launch celebrations for The Lost Man by Jane Harper and for sending me a copy of the book in return for an honest review.

The Lost Man will be published by Little Brown tomorrow, 7th February 2019 and is available for purchase through these links. 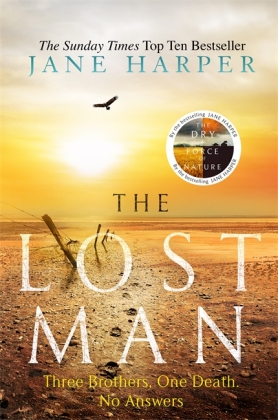 He had started to remove his clothes as logic had deserted him, and his skin was cracked. Whatever had been going through Cameron’s mind when he was alive, he didn’t look peaceful in death.

Two brothers meet at the remote border of their vast cattle properties under the unrelenting sun of the outback. In an isolated part of Australia, they are each other’s nearest neighbour, their homes hours apart.

They are at the stockman’s grave, a landmark so old that no one can remember who is buried there. But today, the scant shadow it casts was the last hope for their middle brother, Cameron. The Bright family’s quiet existence is thrown into grief and anguish.

Something had been troubling Cameron. Did he choose to walk to his death? Because if he didn’t, the isolation of the outback leaves few suspects…

My Review of The Lost Man

When Cameron’s body is found next to the old stockman’s grave in the outback, no-one can work out why he died so far from his car.

Jane Harper’s writing has been so well received that I had probably unrealistically high expectations for The Lost Man. However, the author far exceeded each one. The Lost Man is totally sublime.

The title is so apt. It’s not just Cameron who is lost and found dead, but any of the men in this book could be the lost man. Each has his demons, his secrets, his losses and his pride that prevent him from becoming the man he wants to be. I actually found Jane Harper’s exploration of Nathan in particular, as well as Bub and Harry, quite tender and poignant so that they felt like real men in my own life and not mere characters on the page. Even the brutal, bullying Carl is a lost man. Equally affecting is the impact these lost men have on those around them, so that everyone in The Lost Man is touched by a brilliantly conveyed theme of disorientation and being adrift.

The mystery surrounding Cam’s death thrums with menace throughout the narrative so that I felt both tense and mesmerised by the writing. It’s such a cleverly constructed plot. The way in which small details are uncovered made it impossible not to continue reading. I found Jane Harper’s prose hypnotic and I could not tear myself away. She has a wonderfully distinctive and compelling authorial voice; sometimes as if she’s one of her characters and at other times as if she herself is part of the narrative. I found this incredibly effective. The searing realism of the outback and life in remote Australian places, that leaps from the page through her vivid descriptions and through the realistic and natural dialogue, is absolutely transporting. I was there with Nathan as he struggled to come to terms with Cam’s death and his own life. The undercurrent of violence made me feel quite nervous and I was never quite sure when that violence might erupt.

The emotions in The Lost Man are palpable.  Love, grief and passion are balanced by jealousy, hatred and relief so that every word in this amazing story felt poised, balanced and perfect. I had to compose myself at times as I read. My heart beat more rapidly on occasion and at other times I found I was holding my breath. The explorations of morality, memory and perception left me reeling. As soon as I had established what I thought was happening, Jane Harper shifted my viewpoint as easily as the winds shift the sand at the stockman’s grave. She made me give deep consideration to behaviour, blame and guilt so that I found The Lost Man thought provoking as well as enormously entertaining.

Occasionally I find an author whose writing I find hard to define and describe. That is the case with Jane Harper’s The Lost Man. It is a beautifully written insight into humanity. I think it will be hard to find a book I have enjoyed more this year. The Lost Man is phenomenal.

Jane Harper is the author of the international bestsellers The Dry and Force of Nature. Her books are published in more than 36 territories worldwide, with film rights sold to Reese Witherspoon and Bruna Papandrea.

Jane worked as a print journalist for thirteen years both in Australia and the UK and now lives in Melbourne.

11 thoughts on “The Lost Man by Jane Harper”