My enormous thanks to Lucy at Legend Press for a copy of The Lost Girls of Camp Forevermore by Kim Fu in return for an honest review.

The Lost Girls of Camp Forevermore will be published by Legend Press on 15th February 2019 and is available for purchase here.

The Lost Girls of Camp Forevermore 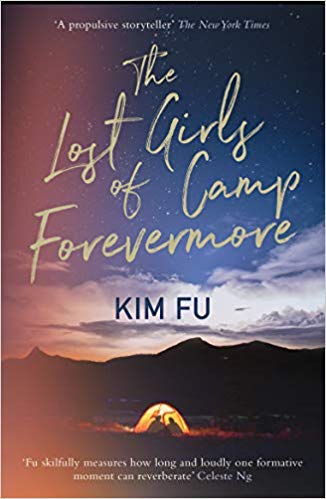 A group of young girls descend on a sleepaway camp where their days are filled with swimming lessons, friendship bracelets, and songs by the fire. Filled with excitement and nervous energy, they set off on an overnight kayaking trip to a nearby island.

But before the night is over, they find themselves stranded, with no adults to help them survive or guide them home.

The Lost Girls of Camp Forevermore traces these five girls through and beyond this fateful trip. We see them through successes and failures, loving relationships and heartbreaks; we see what it means to find, and define, oneself, and the ways in which the same experience is refracted through different people.

A portrait of friendship and of the families we build for ourselves, and the pasts we can’t escape.

My Review of The Lost Girls of Camp Forevermore

Five girls head with their group leader out on an overnight trip whilst at summer camp.

What an intelligent and beautifully crafted novel this is. Initially the title made me think it might be a twee representation of American summer camps, but I was completely wrong. The entire structure and premise of The Lost Girls of Camp Forevermore works on so many levels that I think it would reward multiple reads. The girls do get physically lost on their trip but the book is about so much more in terms of their losses over their lives. Each of the five experiences a loss in a relationship, or of identity, or friendship or self-worth so that there are multiple resonances that any readers could relate to.

However, what I found most fascinating of all the losses in The Lost Girls of Camp Forevermore was the speed with which the girls become quite savage and almost feral as their individual need for survival takes over their behaviour and they lose the constraints of upbringing and society. Frequently I was reminded of Golding’s Lord of the Flies, but with less violence and a more realistic and accessible scenario that somehow made this book all the more shocking, believable and affecting.

I loved the way the initial story of the girls on their overnight camp underpins the accounts of their earlier and later lives. Reading The Lost Girls of Camp Forevermore was akin to looking at a kaleidoscope because all the girls have their own perception of what happened and how they behaved or were treated. Accounts shift and refract depending on which character is the focus of the writing, so that patterns change and alter, providing considerable food for thought. Kim Fu has written a raw and compelling insight into how we create ourselves as individuals that is mesmerising and actually very poignant.

It’s tricky to comment on the plot but I will say that the plot structure is a work of art in itself. Melding past and present events substantiates the characters of the five girls so that somehow they seem more real, more flawed and more human. The settings and descriptions bring a cinematic intensity to the story.

Kim Fu is a highly skilled writer and I found The Lost Girls of Camp Forevermore had quite a profound effect on me, creating quite conflicting emotions at times. For example, I felt contempt for Dina’s obsession with appearance and celebrity and yet simultaneously I felt profound sadness on her behalf too because Kim Fu’s wonderful writing made me understand Dina completely.

It’s hard to define The Lost Girls of Camp Forevermore. It’s certainly superb literary fiction. It could almost be read as a young adult text and yet it embodies a wisdom and understanding of humanity that it ageless and timeless. I found it touching, thought-provoking and fascinating. I really recommend it. 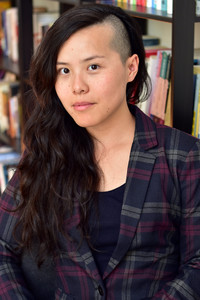 Kim Fu is a Canadian-born writer, living in Seattle, Washington. Kim Fu’s writing has appeared in Granta, the Atlantic, the New York Times, Hazlitt, and the Times Literary Supplement.