I’m so pleased to be able to share an extract from Peter Bartram’s latest book, The Mother’s Day Mystery because Peter has been such a regular here on Linda’s Book Bag that he feels like an old friend!

Although the giveaway on the post is now over, there’s a smashing post from Peter about finding the right reader for audio book versions of Murder in the Morning Edition, Murder in the Afternoon Extra, and Murder in the Night Final that you can read here. Peter has also provided guest posts about writing about a 1960s setting here, why he wrote a trilogy here and introducing his protagonists here.

Published on 9th November 2018, The Mother’s Day Mystery is available for purchase here. 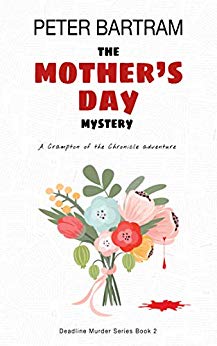 There are just four days to Mother’s Day and crime reporter Colin Crampton is under pressure to find a front-page story to fit the theme.

Then Colin and his feisty girlfriend Shirley Goldsmith stumble across a body late at night on a lonely country road. Colin scents a story when the cops dismiss the idea of murder.

Colin and Shirley flirt with danger as they investigate the killing. They take on a crazy hippie commune, an eccentric group of church bell-ringers, and a chemistry teacher with an unusual late-night hobby.

And that’s before they tangle with the mothers… Colin’s landlady has been thrown out of the Mothers’ Union. And Shirley’s mum has gone missing – in a town where a serial killer is on the prowl.

Join Colin and Shirley for a madcap Mother’s Day mystery in Swinging Sixties England, where the laughs are never far from the action.

An Extract from The Mother’s Day Mystery

A Crampton of the Chronicle adventure

Evening Chronicle crime reporter Colin Crampton and his Australian girlfriend Shirley Goldsmith are driving on a lonely road in Sussex. Colin has just addressed a meeting on the subject of the ethics of the press. It’s a talk that will cause him a lot of trouble. But, at the moment, he has other worries on his mind – like the dangerous road and the filthy weather…

Shirley leaned forward and stared out of the rain-streaked windscreen.

“Jeez, Colin, where are you taking me?” she asked.

We were in my MGB heading out of Steyning the dangerous way – on a narrow track which climbed over the South Downs range of hills. Ahead, the road became steeper. The engine note rose as I changed down from third to second gear. High banks overgrown with bushes and nettles closed in on either side. The track was slick with muddy water. If we met a car coming the other way, there’d be a stand-off. Whoever blinked first would have to back up hundreds of yards to a passing place.

I’d rather reverse around Piccadilly Circus in blindfolds.

But after my talk my throat was dry. I needed a drink – and was taking the shortest route I knew.

I said: “There’s a great little pub called the Marquess of Granby in the village of Sompting on the other side of the hills. We can get some supper there.”

“Sounds great. But is this road the only way? It sure is lonely.”

“It’s called the Bostal,” I said. “It’s a Sussex word for a narrow track leading up a hill. This one heads over the Downs to the coast. And you’re right – not much traffic ever comes this way. Especially at night. Or in weather like this.”

Pounding rain ran in rivulets across the windscreen. The wipers struggled to clear the water.

I said: “The loneliness of this road made it popular with smugglers not so many years ago.”

Shirley swivelled in her seat and stared open-eyed at me. “You mean the real ones with black patches over their eyes and spotted handkerchiefs tied round their necks?”

“And parrots on their shoulders screaming, ‘Pieces of eight’. No, not like the smugglers from fiction. Not even like Rudyard Kipling’s smugglers. You remember the poem: ‘Five and twenty ponies trotting through the dark, Brandy for the parson, baccy for the clerk…’ These were real smugglers who were in it for profit. Big money. And woe betide anyone who stood in their way. Even in my granddad’s time there was a gun battle up here between smugglers and customs men. Two smugglers were shot dead.”

“You wouldn’t get them fighting it out on a night like this,” Shirley said.

The engine note fell as we reached the summit of the hill. I changed up a gear and we picked up speed. To our left, the hills fell away in a steep escarpment. The blackness of the night was broken by pinpricks of light on the horizon. They flickered dimly through the rain.

I depressed the accelerator and the MGB surged forward. The tyres fizzed as they cut through spray from the road.

I stamped down on the brake. The tyres squealed on the wet road. The MGB’s rear-end fishtailed. The headlights wavered. The engine cut as we shuddered to a halt. So what? A perfectly executed emergency stop in my book. And I’d defy any driving instructor to disagree.

I turned to Shirley, but she’d already wound down her window and was staring at something back along the road.

“There’s something lying on the verge.”

I grabbed my torch from the glove compartment and we climbed out of the car. The wind blew needles of rain into our faces. We hunched our shoulders like a couple of old ditch diggers. We scrunched up our eyes and stared into the darkness.

I said: “There is something there. Looks like a lump by the side of the road.”

I shone my torch, but it just made the raindrops sparkle like falling diamonds.

We slithered towards the lump. Our feet splashed through puddles and squelched on mud. We skidded to a halt on the wet grass at the side of the road.

The lump turned out to be a bicycle.

It lay abandoned by the roadside. I shone my torch downwards. It had been a smart bike, too. A bike it’s owner would have taken pride in. A Norman 77I – the I stood for Invincible – made by the British Cycle Corporation. But it wasn’t an invincible bike now. The back wheel was broken. The spokes splayed out like a busted rake. Some were bent, others had snapped. The rear tyre was shredded. One brake cable had severed. Red glass from the rear light lay broken on the road. The handlebars were twisted.

I said. “Looks like this cycle was hit from the rear by something. Probably a car. And going at speed.”

“Is it recent?” Shirley asked.

“Hard to say,” I said. “But the biggest question is what happened to the person riding it? There’s no sign of blood, but that could’ve been washed off by the rain. Let’s take a look around.”

Shirley wandered a few steps onto the grass verge.

“Be careful,” I called after her. “The escarpment falls away sharply and there’s no fence.”

But, as usual, she’d ignored me. She’d vanished into the blackness of the night. I waved the torch around a bit, but I might as well have been lighting matches down a coalmine.

I called out: “Shirley.” But my cry was carried away on the wind. By now, the rain had seeped under my shirt collar and was running down my back.

I strained my ears and listened for a sound. The wind sobbed in the trees. But there was no crash, no scream as a body hurtled through undergrowth to the foot of the escarpment.

The rain down my back had reached my underpants. Nothing about this was going to end well.

I yelled again: “Shirley!” My voice sounded shrill, or perhaps it was just the way the wind distorted it.

I sighed with relief and ran towards her voice. Didn’t care whether I was near the escarpment’s edge. Couldn’t be bothered the rain had now soaked the seat of my trousers. I was just so relieved to hear her voice.

My torch waved wildly around. I played the beam on Shirley’s face. And knew at once there was trouble. Her eyebrows were drawn down and her lips were compressed with tension. She pointed at the ground.

I swung the torch down.

A crumpled body lay face down in the long grass. It was tall, more than six feet, I guessed. It was dressed in a long gabardine raincoat and a sou’wester. I knelt down, reached under the sou’wester for the neck and felt for a pulse. None.

(Now, you can’t leave it there Peter. I need to know what happens next!)

Peter Bartram brings years of experience as a journalist to his Crampton of the Chronicle crime series – which features crime reporter Colin Crampton in 1960s Brighton.

Peter has done most things in journalism from door-stepping for quotes to writing serious editorials. He’s pursued stories in locations as diverse as 700 feet down a coal mine and a courtier’s chambers at Buckingham Palace. Peter wrote 21 non-fiction books, including five ghost-written, before turning to crime – and penning the Crampton of the Chronicle series of humorous crime mysteries.

Peter is a member of the Society of Authors and the Crime Writers’ Association.