I’m absolutely delighted to have a very special giveaway here on Linda’s Book Bag today – a box set of Audible mystery novellas, The Morning, Noon & Night Box Set: Murder in the Morning Edition; Murder in the Afternoon Extra; Murder in the Night Final by Peter Bartram, read by Matt Jamie.

Peter is no stranger to Linda’s Book Bag, having previously featured in the following ways:

Writing about a 1960s setting here.

Explaining why he wrote a trilogy here.

Not only do I have a giveaway that you can enter at the bottom of this blog post, but I have a smashing guest post from Peter today explaining just how Matt was chosen to read the books.

Murder in the Morning Edition;

Murder in the Afternoon Extra;

Murder in the Night Final

Welcome to Brighton, England – where they do like to murder beside the seaside…

Evening Chronicle crime reporter Colin Crampton and his feisty Australian girlfriend, Shirley Goldsmith, take on their toughest assignment yet in this trilogy of comic crime adventures.

The adventure starts in Murder in the Morning Edition when Colin and Shirley witness an audacious robbery. But nothing about the robbery is what it seems. Before long, Colin and Shirley are drawn deeper into danger. Colin encounters a motorcycle rocker with bad teeth, a dyslexic tattooist, and a seller of novelty toilet-roll holders as he chases down his story.

The mystery deepens in Murder in the Afternoon Extra as the body count climbs and Colin finds himself hunted by a ruthless killer. Before long, Colin discovers his hunt for the truth has dumped him right into the middle of a conspiracy he could never have foreseen. As he battles to find a way out of danger, he meets a stripper with a pet python, a clumsy assassin who kills the wrong people, and a slot machine salesman with even less luck than his punters.

The climax explodes in Murder in the Night Final when Colin and Shirley uncover the stunning secret behind the robbery and the murders. As the two face new threats, they tangle with a doorman with a cauliflower ear, a motorcycle rocker’s moll, and a ruthless killer who keeps chickens.

If you enjoy books by authors like Janet Evanovich, M C Beaton, and Simon Brett, you’ll soon be hooked by the mix of murder, mystery, and mirth in the Morning Noon & Night trilogy. Come and join the fun….

How We Chose One Actor From 56,000 To Read Crampton Audiobooks

I was delighted when I heard that three of my Crampton of the Chronicle comic crime mysteries – Murder in the Morning Edition, Murder in the Afternoon Extra, and Murder in the Night Final – were being turned into audiobooks. But the books are narrated in the first person – by Colin Crampton, the central character – so I knew the success of the audiobooks would rest on whether we could find a reader who could capture Colin’s distinctive voice.

Colin is a shrewd character who can be tough when he needs to be but who also has a perky humour which keeps on breaking through. He’s a master of the one-liner. So the actor needed to know how to talk tough but also how to deliver a line to raise a laugh.

So where did we start in our search? Well, it was with a giant database of 56,000 actors who read audiobooks. The database contains actors from all over the world, but most of them are based in the UK and United States. We had to find a way to whittle those 56,000 to the one who would be right for the Crampton books. We did this by applying a number of filters to the database. There were obvious ones like gender, nationality and language. Those alone cut the numbers to a few thousand – but still too many to review one by one.

So then we applied some more subtle filters to the selection. One of these was voice age – how old the actor sounds when he speaks. Colin is twenty going on thirty in the Crampton books, so that reduced the possible choices further.

Then we looked at the question of accent. The database filters offered us 17 different British accents to choose – from “BBC English” to Cockney. We chose the “general British” accent. And then we had to decide on “voice style” – what the actor’s voice sounds like. We had to choose from 62 different styles ranging from “authoritative” to “intimidating”, from “sarcastic” to “sophisticated”. We thought Colin had an “engaging” voice.

So after we’d applied all those filters, the 56,000 actors had reduced to just 19. We listened to samples from books the 19 had already read and drew up a short-list of three which we reviewed in more depth. And from that, one candidate stood out above all others – Matt Jamie. Matt already had experience of audio work. He’d worked on a crime-based radio drama called Strawberries and Scream and recorded a series of crime stories with a water theme called Blood Waters. He’d also recorded Phantom: Edge of the Flame, a spin-off from Phantom of the Opera.

Matt says: “When I’m asked to read a book, I decide whether the characters or the subject matter interest me. And, then, perhaps more importantly, whether I think I can do it justice. Different books have different styles. Some might have many characters in them. So I have to think about whether I can capture them all and deliver the story or the facts in an engaging way.”

You can hear how Matt reads from Murder in the Morning Edition, the first book in Peter Bartram’s Morning, Noon & Night trilogy, by following this link and clicking on the sample button.

Peter Bartram brings years of experience as a journalist to his Crampton of the Chronicle crime series – which features crime reporter Colin Crampton in 1960s Brighton.

Peter has done most things in journalism from door-stepping for quotes to writing serious editorials. He’s pursued stories in locations as diverse as 700 feet down a coal mine and a courtier’s chambers at Buckingham Palace. Peter wrote 21 non-fiction books, including five ghost-written, before turning to crime – and penning the Crampton of the Chronicle series of humorous crime mysteries.

Peter is a member of the Society of Authors and the Crime Writers’ Association. 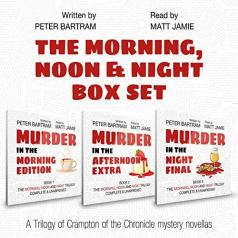 Peter has kindly offered a lucky Linda’s Book Bag UK reader a promo code together with the text of an e-mail explaining how to use it and the terms and conditions which Audible asks to be passed on to the winner. If you would like the chance to hear all three novellas, click here to enter.

Giveaway closes at UK midnight on Friday 6th July 2018 and is independent of Linda’s Book Bag. I am not responsible for the code’s activation.

One thought on “Audiobook Giveaway: A Box Set of Crampton Chronicle Books by Peter Bartram”